Preserving the Record: Why Storytelling Is So Vital in Times Like These 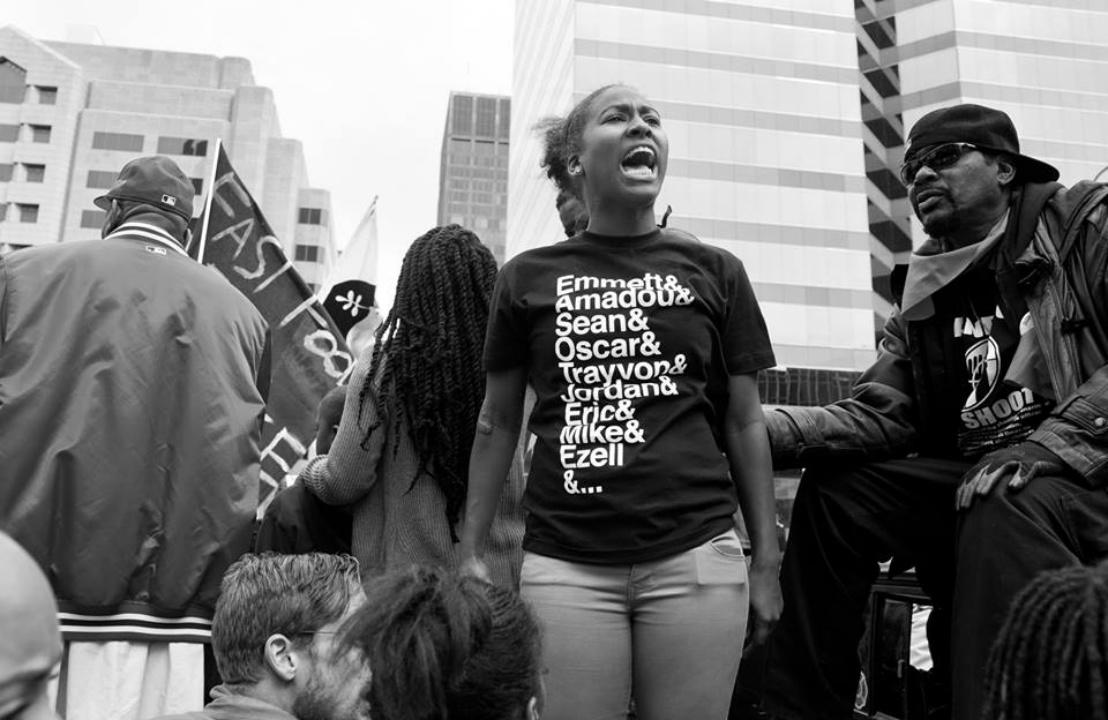 Sabaah Folayan and Damon Davis’s 2017 documentary ‘Whose Streets?’ went inside the 2014 protests in Ferguson, Missouri, in the wake of Michael Brown’s murder by a police officer.

“At some point, your own story becomes history.” — David France, director of How to Survive a Plague

Some
of the biggest moments and movements in modern human history have been
(or are being) carefully documented by independent artists working in
film, theatre, VR, music, and beyond—not to mention protesters on the ground in cities across our country.

In honor of Preservation Week in April, we took some time to recognize storytellers and those responsible for safekeeping and sharing our collective stories for generations to come. Artists take the challenging realities they and their communities face and create meaning to not only cope, but learn, inspire, and provide a way forward. As a culture, we can’t afford to lose these stories, and that’s why preservation is essential. Artists explore and document the world around us, and archivists help to ensure their work is preserved and made accessible.

Some stories are captured by seasoned artists, while others are captured by individuals compelled to pick up a camera or start writing for the first time, but they’re all vital in ensuring our historical record is equitable. The type of storytelling we’re featuring takes the shape of moving images, live performance, and immersive media—compelling and powerful artforms that transform the personal into shared experience, further expanding perspective and empathy as well as enriching dialogue and collective memory.

We need artists during times like these. We need to ensure they can tell their stories, that those stories are seen, and that they endure the test of time. Below, we’ve highlighted a selection of Sundance-supported stories that must be seen and remembered.

Sabaah Folayan’s ‘Whose Streets?’ offers an unflinching look at the Ferguson uprising.

Why It’s Vital: “The
first day that we filmed we just had this rush where we realized: We
have to keep telling the story, we have to see this through, we have to
bear witness to this,”
said Sabaah Folayan, director of Whose Streets?,
in an interview with KCRW Berlin. “Every night when the last news truck
would leave, the police would escalate the violence against people. We
were the only ones who stayed.” [
Ed. note: Whose Streets? is currently streaming on Hulu.]

From the Festival Catalog: “Told by the activists and leaders who live and breathe this movement for justice, Whose Streets? is an unflinching look at the Ferguson uprising. When unarmed teenager Michael Brown is killed by police and left lying in the street for hours, it marks a breaking point for the residents of St. Louis, Missouri. Grief, long-standing racial tensions and renewed anger bring residents together to hold vigil and protest this latest tragedy.”

Kimberly Rivers Roberts and Scott Roberts in a still from ‘Trouble the Water.’

Why It’s Vital: “[Kimberly Rivers Roberts and Scott Roberts] had taped this mesmerizing footage of their journey to higher ground during Katrina, and they felt like they had something they wanted the world to see,” said Tia Lessin, co-director of Trouble the Water, an acclaimed documentary she made with Carl Deal about a young couple’s incredible struggle for survival during Hurricane Katrina. “Working with that footage, it was very obvious from the moment that we saw it that it was an extraordinary document,” Deal added. [Ed. note: Trouble the Water is streaming now on Tubi.]

From the Festival Catalog: “Documentarians
Tia Lessin and Carl Deal engage with native New Orleans filmmaker and
musician Kimberly Rivers Roberts and her husband, Scott, to create a
powerful, partly autobiographical survival story that reflects many of
the lives of the people of New Orleans.
Trouble the Water
makes unapologetically clear that Hurricane Katrina rages on as an
unnatural disaster of governmental and journalistic neglect.”

Why It’s Vital: “I had a very strong feeling … that this story had to be documented by one of us. I was there as a filmmaker but also as an aboriginal person,” said Canadian Abenaki filmmaker Alanis Obomsawin in 1994, the year she brought her feature-length documentary about the 1990 Oka Crisis, to Park City for the Sundance Film Festival. To make the film, she and her crew spent 78 days embedded in the middle of the standoff between Mohawks and Canadian authorities. They ended up shooting more than 250 hours of 16mm footage with the support of the National Film Board of Canada. [Ed. note: The NFB has made the project available on YouTube.]

From the Festival Catalog: “For seventy-eight days during the summer and early fall of 1990, the world watched as Mohawks rose up to defend their land in an armed standoff with the Quebec police and the Canadian army. Kanehsatake: 270 Years of Resistance is Abenaki filmmaker Alanis Obomsawin’s firsthand account of the struggle.”

Why It’s Vital: “The story of Crip Camp was a hidden story and a story that I didn’t want to be lost to history,” remarked Jim LeBrecht, the project’s co-director, when it had its world premiere on the opening night of this year’s Sundance Film Festival. Crip Camp, produced by Barack and Michelle Obama’s new Higher Ground Productions, is now streaming on Netflix, and it explores how a ’70s summer camp for teens with disabilities became the birthplace of the modern disability-rights movement via a bounty of archival clips shot by the former campers as well as present-day interviews that show how their activism evolved over time.

From the Festival Catalog: “No one at Camp Jened could’ve imagined that those summers in the woods together would be the beginnings of a revolution. Just down the road from Woodstock, Camp Jened was a camp for disabled teens. Directors Nicole Newnham and Jim LeBrecht (a former Jened camper himself) deliver a rousing film about a group of campers turned activists who shaped the future of the disability-rights movement and changed accessibility legislation for everyone.”

Why It’s Vital: “When I was seventeen, bombs rained down on my hometown of Belgrade, Serbia,” writes Milica Zec, director and co-creator of the immersive 2016 New Frontier VR project Giant. “War felt like an abstraction gone personal; at the time, I never believed it could happen to me. … Most people said the [VR] experience demystified war zones by bringing them back to the simple power of a family in peril.” [Ed. note: You can explore the project virtually here.]

From the Festival Catalog: “Trapped in an active war zone, two parents struggle to distract their young daughter by inventing a fantastical tale that incorporates the melee around them. Inspired by true events, this immersive virtual reality experience transports the viewer into the family’s makeshift basement shelter. The parents’ fairytale intensifies as bomb blasts draw closer and closer.”

A still from David France’s 2012 documentary ‘How to Survive a Plague.’

Why It’s Vital: “At some point your own story becomes history,” said David France, director of the 2012 Festival selection How to Survive a Plague, in his video from our Meet the Artist series. Before becoming a filmmaker, France was a journalist who had covered the AIDS epidemic since its beginning, and he dedicated the film to his late partner, Doug Gould, who died of AIDS-related pneumonia nearly two decades earlier.

From the Festival Catalog: “Faced with their own mortality, an improbable group of mostly HIV-positive young men and women broke the mold as radical warriors taking on Washington and the medical establishment. Blisteringly powerful, How to Survive a Plague transports us back to a vital time of unbridled death, political indifference, and staggering resilience and constructs a commanding archetype for activism today.”

Why It’s Vital: “I set out to write about what it was like to be me, a gay man in New York, in the mid-1980s, and it was not possible to do that without placing it in the middle of the [AIDS] epidemic,” said Tony Kushner, playwright of Angels in America, during a 2014 interview with The Seattle Times. Added Kushner, who brought the award-winning project through our 1990 Playwrights Lab, “I think plays can preserve a memory, or prevent amnesia over things worth remembering.”

From Playbill: “In late 1985 and early 1986, as the first wave of the AIDS epidemic in America is escalating and Ronald Reagan has been elected to a second term in the White House, the play’s two parts bring together a myriad of disparate characters whose lives intersect, intertwine, collide and are blown apart during a time of heartbreak, reaction and transformation. Ranging from earth to heaven, from the political to the intimate to the visionary and supernatural, Angels in America is an epic exploration of love, justice, identity and theology, of the difficulty, terror and necessity of change.”

Sundance Institute helps artists tell their stories—and the Sundance Institute Archives & Collection works to protect and preserve them. We are a dedicated team passionate about preserving and sharing independent stories and the history of the organization for generations to come. Learn more about the Archives & Collection at sundance.org/archives, and follow the team’s Tumblr.

[Ed. note: This story was originally published in May 2020 during Preservation Week.]