One on One: An Interview with the Sundance Institute’s Cara Mertes and Michelle Satter 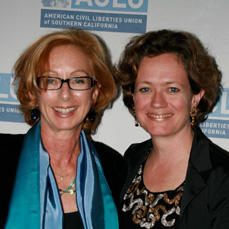 The 2010 Sundance Film Festival is bringing 50,000 people to a snowy decked-with -colored-lights Main Street, that from a postcard could be any fabled intersection of Americana. But it’s a far hop, skip, and jump from any old crossroads; it’s busting with creative energy complete with artists/cinephiles/activists/politicians/entreprenuers/humanitarians all who form a singular parka-bundled community eager to engage, connect, and be changed by a fundamental love for story.

Once we leave the mountain and return to our respective towns that hopefully have already taken down their holiday lights, the challenge to propel the momentum of the Festival and find new reaches for these stories is still an uphill climb. The Festival is presented by the not-for-profit Sundance Institute, which spends the other eleven and a half months of the year committed to supporting artists.

We spoke about being in the cultural trenches, digging out for two weeks of Festival celebrations, and why our country should pull up its boot straps and revalue the arts.

Michelle: Over the almost 30 years since Sundance Institute first came into existence, the individual artist has remained at the center of our programs. One of our core beliefs is that artists are key to creating an engaged and informed society. The American filmmakers who have participated in our programs have represented the diversity of our vibrant culture. More recently, we’ve expanded our programs to include international artists from countries around the world who are hungry to be part of a world community. We give all of our Lab Fellows a safe space to explore their ideas and develop their storytelling skills. By design, we encourage and protect the artists’ freedom to express their point of view no matter how controversial or unpopular it might be.

Cara: We live in a culture that often devalues artists and culture generally. We don’t have funding in this country. It’s embarrassing on the national level, on the state level, and on the local level the way culture is either relegated to a haute status or it’s put strictly into an entertainment status—let’s enjoy ourselves, no further action necessary.

And I think part of the effort of the Institute over the years is a question of how you revalue arts in society and look at that in a very holistic way, not just in an advocacy-oriented way, not in a purely political way. How do you create art for the whole person who can engage with creativity and artistry? How do you support artists that speak to those issues but are not artists that are working through formula, not artists that are working simply to become successful in a given structure of entertainment?

That I think places Sundance outside of the usual cultural institutions that simply showcase. We’re actually driving the creation of a certain kind of storytelling, both through theatre and in film that wouldn’t really exist otherwise and that we very much need in our country.

Michelle: Storytelling is our mission and we believe that film and theatre have the power to transform, to transcend, and to be a catalyst for social change. On a basic level, stories can engage us, challenge us, and connect us to our deepest humanity.

In Sin Nombre, Cary Fukunaga’s film gave audiences a window into the harrowing story of one Honduran teenager’s quest to make it to the United States in search of a better life. In the play Laramie Project, Moises Kaufman followed the residents of Laramie, Wyoming in their journey to activate their community in response to the brutal murder of gay college student Matthew Shepard. These are just two examples of the over 3,000 projects that have been supported in our Labs and Festival.

Cara: When you have a film about what happens when you don’t have unions, and you have migrant labor like in Los Angeles, if it’s not very good, not a lot of people are going to watch it, they’re not going to care. If it [the film] is very good, it will reach millions of people and actually get people talking in a dialogue about how you enable workers’ rights. So for us to be able to step in as an Institute and say to a filmmaker, ‘This is important and we think you need to go from good to great. Maybe you could do it on your own, but it sure is easier when you have a lot of people behind you, helping you.’

What are the nuances you see between narrative and documentary storytelling?

Michelle: There are differences in the approach and the tools available for fiction and non-fiction filmmakers. Many of the narrative projects we select come from a deeply personal place and authentic voice. Our Screenwriters Lab focuses on helping emerging writers become more effective storytellers as they develop their scripts, focusing on creating rich and complex characters who evolve the story in dramatic and surprising ways.

Most of the scripts we select present a world that is full of detail and specificity. Our Directors Labs offers filmmakers an opportunity to develop their skills working with actors, visual language, and workshopping text. And, in our Film Composers Lab, our directors collaborate with composers to help them develop their understanding of the power of music and sound design.

Our labs are all hands-on, interactive, process-driven programs that embrace community and celebrate the collaboration between emerging artists and the more established artists who come as mentors. Filmmakers are encouraged to try new things, to focus on what they don’t know, and push the boundaries of their work in a generous and protected environment.

Cara: I think part of your question is also about the differences between narrative filmmaking and documentary filmmaking, and I think it’s safe to say that we have the same angle in mind in the projects that we support which is to create stories that resonate within the deepest levels of fundamental humanity. It can be everything from rage and envy to joy and compassion, love, humor; and all those things that make us human.

And when you create a story that taps into that, it’s an effective story. It doesn’t matter if it’s fiction or nonfiction. Often Fellows go back and forth between the Doc and Feature Program. In fact, we had a film this year which started in the Documentary Film Program, then went on to do great work in the Feature Film Program, and is premiering at the Festival, which is HOWL.

Michelle: HOWL was conceived as a hybrid project using both documentary and narrative elements. We invited Rob Epstein and Jeffrey Friedman to our Screenwriters Lab at a seminal moment in the project’s development; they were close to starting production and wanted to reexamine their script.

Their script included existing interviews with Allen Ginsberg, the full text of the poem “Howl” heard partly as a reading by Ginsberg in front of a live audience and partly over expressionist animation, and a reenactment of the obscenity trial where Lawrence Ferlinghetti defended his right to publish the poem. They wanted to discover additional ways to dramatize their scenes and they wanted to add more complexity to Allen Ginsberg’s character so his emotional journey would resonate with audiences.

We had a great experience working with Rob and Jeff in our Lab. We continued to support them when they reached the post-production stage through a series of rough cut screenings to help them further realize the potential of their material as they continued to edit.

Cara: Often in the post-production process, it’s where a lot of our [documentary] work takes place as well, screening and really sitting in an edit room where we work with a team to find their own way to the story they want to tell, and perhaps offer different options and identify challenges not with answers about what they have to do to fix it, but to say, ‘This scene isn’t working and here’s what it’s doing to me,’ and maybe through that feedback they can find some solutions to things that are stopping the narrative or diluting the impact. Howl is a perfect example because what happened in the process– they didn’t get rid of any of their different elements but they changed the relationship of one element to another, whether it was an reenactment or the scripted sequences with actors or the animation.

What are the other projects your programs have supported that will be screened with audiences at this Festival?

Michelle: Sons of Babylon, a film made by Mohamed Al-Daradji, came to both the Utah Screenwriters Lab and the Sundance/RAWI Middle Eastern Screenwriters Lab. Mohamed shot his film at great risk in Iraq. It’s a story that takes place after the fall of Saddam Hussein in 2003 and follows the emotional journey of a Kurdish mother and her grandson looking for their son/father.

Mohamed talks about his film as a story of hope and forgiveness as he wanted to give a voice to the many Iraqi and Kurdish people missing in the aftermath of Hussein’s reign. This is one of ten films supported by the Feature Film Program Labs and granting program which will premiere at the Festival which include HOWL, Night Catches Us, 3 Backyards, The Imperialists are Still Alive!, Boy, Women without Men, Homewrecker, The Freebie, and The Tacwacores.

Cara: This year’s crop of documentaries are some of the richest and most remarkable pieces of storytelling that I’ve seen as a group in a long time. Documentaries are getting more sophisticated in the storytelling and the techniques the storytellers are using- and this is globally. These are stories with people dedicating their lives to capture reality or tell a story about an issue that needs to be told.

The Festival has always been a great platform for artists. For the first time this year, there is Sundance Film Festival U.S.A., a distinct day set aside to celebrate the importance of arts in America. What about this Festival are you most looking forward to?

Michelle: The Festival offers an opportunity to connect audiences with a very exciting group of groundbreaking films. There’s also an incredible program of panels which provide lively conversations focusing on the important issues of our day. I always look forward to live performances offered at the Music Cafe. I love New Frontier, which is a place to witness the interaction between film, the visual arts and technology. Mostly, it’s truly inspiring to sit in a dark room with an audience experiencing a film for the first time. Each filmmaker’s fierce creativity and unique vision is celebrated with great enthusiasm and lasting impact.

Cara: What I love about Sundance is community. We spend time with the artists and we’re really concentrating on all the people we bring together who are the core of the Festival. When you see how they connect to each other, they appreciate each other’s work, and they understand what it takes to create this film, this music, this installation, they understand what it takes to be an artist in a society that doesn’t necessarily value the work that they do and they’re all together celebrating each other in a way. At times where resources are scarce, and there are big troubles, we’re fighting two wars, you look for community, you look for like-minded people. Not only to find solace but to find solutions. And the Festival has increasingly become a place where you can do that.