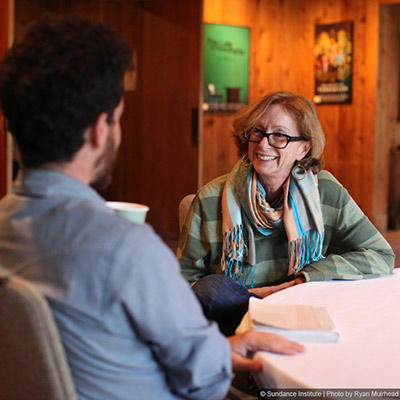 Activities at the weeklong, immersive Lab include individualized story sessions, conversations about key artistic, design and technology issues, and case study presentations from experts in diverse related disciplines. The Lab draws talent and expertise from all of Sundance Institute’s creative programs, including Feature Film, Documentary Film, and the Sundance Film Festival.

Robert Redford, President and Founder of Sundance Institute, said, ”As our New Frontier initiative continues to develop, we hope the Story Lab provides a unique opportunity for these artists to receive the support which will allow them to focus on the story driving their projects. The work that results will both define the space and advance it.”

Michelle Satter, Founding Director of the Sundance Institute Feature Film Program, said, “The New Frontier Lab offers a creative process that is immersive, collaborative and designed to be a catalyst for innovation and stories that resonate in meaningful ways. The fellows will engage with a wealth of experts in various disciplines who are leading the future of storytelling in design, gaming, live performance and immersive experiences.”

The creative teams and projects selected for the 2013 New Frontier Story Lab are:

#PostModem is a comedic, satirical sci-fi musical set in a future Miami on the brink of the convergence of artificial and human intelligence. In this complex storyworld of live and digital spaces, audiences are immersed in the narrative of a teenage girl who must decide to usher in this “singularity” or destroy it at its source.

Jillian Mayer and Lucas Leyva were included in Filmmaker Magazine’s “25 New Faces of Independent Film” list, and their collaborations have screened at film festivals, museums and galleries worldwide including the Sundance Film Festival, Milan, SXSW, MoMA, Guggenheim Museums in Venice, Bilbao, Berlin, New York, and the permanent collection of the Miami Art Museum. Together they help run the Borscht collective and Film Festival.

This multiplatform web series radically modernizes Shakespeare’s most famous play as a political thriller for the social media age.

Jay Bushman is a writer, producer and pioneer of independent transmedia. He was the transmedia producer and a writer for The Lizzie Bennet Diaries, for which he won a 2013 Emmy® Award for Outstanding Creative Achievement in Interactive Media – Original Interactive Program. Other projects include the Emmy® Award-winning Dirty Work.

M. Elizabeth Hughes is a producer residing in Los Angeles. She has credits on the award-winning Short Term 12, Joss Whedon’s Much Ado About Nothing, and Save the Date. She also produced the web series Husbands, currently airing on CW Seed.

The Memory Mosaic is a web-based, public art project that captures the complex emotional experience of connecting with our aging loved ones. The project will offer visitors a place to tell personal stories and connect with others, creating a powerful mosaic of a community connected through compassion.

Sarah Kramer is an Emmy and Peabody Awards-winning documentary storyteller and journalist. She was a founding staffer and senior producer of NPR’s StoryCorps and a multimedia editor at The New York Times where she created One in 8 Million. She started in documentary films at PBS and HBO.

This is the story of Gary Baseman, one of America’s most prolific artists, and the relationship between his art and the breath-taking discoveries about his parents who survived the holocaust in the Ukraine.

Gary Baseman is a Los Angeles-based artist and three-time Emmy and BAFTA Award-winning creator. Deemed one of the 100 Most Creative People by Entertainment Weekly, a retrospective of his work from the past 25 years showcased at the Skirball Cultural Center in 2013.

David Charles is an award-winning writer and director. He has created interactive and non-traditional storytelling experiences for brands and properties worldwide. In 2011, Charles became Baseman’s creative partner; which has spawned a feature currently in development, an animation and their next project: Mythical Creatures.

The most powerful and visionary builder in New York City history is confronted by a groundbreaking urban theorist leading a revolt against his plan to demolish her neighborhood, igniting a conflict that will shape the cities of the future and the lives of those who call them home.

Judd Greenstein is a composer. Recent commissions include the Minnesota Orchestra, Lucerne Festival, Alabama Symphony, Claremont Trio, ETHEL, yMusic, and Roomful of Teeth. He is the co-director of New Amsterdam Records/New Amsterdam Presents, the curator of New York’s Ecstatic Music Festival, and as a founding member of NOW Ensemble.

Vacant America is a documentary that uses projection mapping on the nation’s empty structures to examine the underlying American philosophy that has shaped the concept of vacancy through expert interviews and community stories.

Klip Collective specializes in creating immersive visual experiences by combining media technology and problem-solving engineering with a cinematic vision. Klip excels in invention-based production with multiple patents in projection mapping. In 10 years, Klip has gone from an artistic endeavor to a creative partner of the world’s most respected advertising agencies. They premiered What’s He Building in There? at the 2013 edition of New Frontier at the Sundance Film Festival.