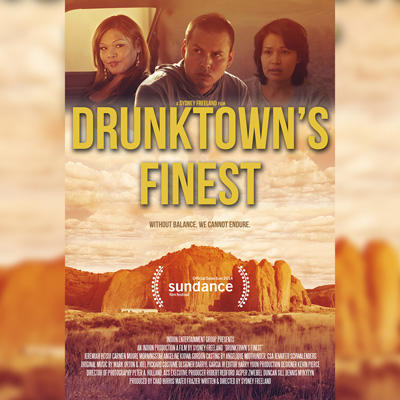 Each Fellow was identified by one of the following core programs of the Institute: Documentary Film Program, Feature Film Program, Film Music Program, Native American & Indigenous Program and Theatre Program. Fellows attend an annual Lab and receive continued support from the Institute, including mentoring, strategic granting, attendance at the Sundance Film Festival and participation in screenplay readings, work-in-progress screenings and related programs and events. The Native Producing Fellowship addresses the need to deepen the field of Native American and Indigenous film producers who can engage with the marketplace while supporting independent artists in their development processes.

Keri Putnam, Executive Director of Sundance Institute, said, “With Time Warner Foundation’s critical support, Sundance Institute is able to foster independent storytellers from diverse backgrounds with distinctive and original voices. Our collaboration through the Time Warner Foundation Fellowship Program has nurtured exceptional artists like Ryan Coogler, Aurora Guerrero and Branden Jacobs-Jenkins, who have shared their award-winning work with audiences around the world.”

“The mission of the Time Warner Foundation is to seek innovative and powerful ways to discover, nurture and celebrate the next generation of storytellers,” said Lisa Garcia Quiroz, President of the Time Warner Foundation. “The creative team at Sundance Institute has a keen eye for extraordinary new talent. We are proud to collaborate with them, and we welcome the new Fellows.”

Jongnic Bontemps (Film Music Program) – Jongnic Bontemps has scored numerous films including the award-winning Daughter of Fortune, A Different Tree, Soaring on Invisible Wings and Saudade. His scores incorporate ethnic instruments with organic and synthetic textures to create a unique musical world for a film. Through the Sundance Institute | Time Warner Foundation Fellowship he was able to hire an orchestra and record live scores for two short films, Roubado and Para Ellos.

Chanda Dancy (Film Music Program) – Film composer Chanda Dancy is known for her rich musical scores, providing engaging music for films playing in festivals such as Cannes, Tribecca and Sundance. Besides composing, Chanda is also a versatile multi-instrumentalist and gifted vocalist, having performed across the United States. The Sundance Institute | Time Warner Foundation Fellowship included support for Chanda and the opening of CYD Post (pronounced “sid”), a company she founded that is dedicated to providing music and sound artistry for films and various other multimedia platforms.

Sydney Freeland (Navajo) is an independent filmmaker and has worked for a number of  companies including The Food Network, Comedy Central, Office Max, Audi, National Geographic, PBS and Walt Disney. She is also a recipient of the following awards: 2010 Sundance Screenwriting Fellowship, 2010 Sundance Directing Fellowship, 2010 Eccles Directing Fellowship, 2009 Sundance Native American Lab Fellowship, 2008 Disney Fellowship semi-finalist, 2007 Disney Scholarship recipient, and is a 2004 Fulbright Scholar. Sydney currently lives and works in Los Angeles. In July of 2014, her film Drunktown’s Finest will screen in New York at the Museum of Modern Art as part of Sundance Institute’s yearlong celebration of its Native American and Indigenous Program’s 20th Anniversary.

Cody Harjo, In The Time of Occupy (Native American and Indigenous Program)
Sundance Institute | Time Warner Foundation Native Producing Fellow – In the Time of Occupy introduces Jim Anders, an investment banker specializing in high-end deals for Indian Country. He has a determination to succeed that only those from extreme hardship possess. Jim’s wayward cousin, Josh, is a participant of the Occupy Wall Street Movement and currently an unwanted houseguest. While Jim tries to disregard the rising movement and Josh’s politics, he learns that his latest tribal casino deal is falling apart. The brilliant lawyer sent to renegotiate on the tribe’s behalf is his ex – fiancé.
Cody Harjo (Seminole/Otoe/Creek/Cherokee/Iowa) holds a Bachelor’s degree from Dartmouth College, where she received the Alexander Laing Memorial Prize for Excellence in Screenwriting. She currently resides in New York City. Harjo wrote the dystopian film The Migration which was directed by Sundance Institute | Time Warner Foundation Fellow Sydney Freeland in 2012.

Christina D. King, Warrior Women (Native American and Indigenous Program)
Sundance Institute | Time Warner Foundation Native Producing Fellow – Warrior Women is the story of American Indian Movement activists who fought for civil rights in the 1970’s and the children who were their inspiration and cohorts. Through documentary vérité and archives the film shows the complex relationships that continue in families when motherhood is shared with a movement.

Christina D. King’s (Creek/Seminole) work focuses largely on civic engagement through storytelling and democratizing media opportunities for minority voices. King’s feature producing credits include Up Heartbreak Hill (POV) and This May Be the Last Time (Sundance Channel Global Intl.) She is currently producing the feature film, We The Animals, directed by Jeremiah Zagar. King began her career in production on the feature films Fur: An Imaginary Portrait Of Diane Arbus and Che, among others, before moving on to work for Michael Moore on Capitalism: A Love Story and Line Produce for Ric Burns and Chris Eyre on Tecumseh’s Vision, as part of the American Experience: We Shall Remain series on Native American history.

Heather McIntosh (Film Music Program) – Heather McIntosh is a cellist, bassist and composer who got her musical start playing with the Elephant 6 collective in Athens, Georgia and went on to perform with artists such as Gnarls Barkley and Lil Wayne. Now residing in Los Angeles, her many film credits include Compliance by Craig Zobel and The Rambler by Calvin Lee Reeder. The Sundance Institute | Time Warner Foundation Fellowship included support for Heather to develop the score and record pipe organ source sounds for Craig Zobel’s upcoming feature Z for Zachariah featuring Chiwetel Ejiofor, Margot Robbie and Chris Pine.

Qui Nguyen, War Is F**King Awesome (Theatre Program) – War Is F**king Awesome is a politically incorrect action‐comedy following the life of Unity Spencer, a young colonial girl imbued with immortality but cursed to fight in every American conflict from the American Revolution to present day and beyond.

Qui Nguyen is a Brooklyn‐based writer, fight choreographer, and Co‐Founder of Vampire Cowboys, an OBIE Award‐winning “geek theatre” company based in NYC that focuses on highly physical genre‐bending productions blending stage combat, multimedia, and puppetry. Qui’s plays include the Off‐Broadway productions of She Kills Monsters (premiered by The Flea and subsequently produced in Steppenwolf’s Garage Rep by Buzz22 Chicago and in Boston by Company One) and Soul Samurai (premiered by Ma‐Yi Theater in association with Vampire Cowboys). Qui is a resident artist of New Dramatists, a core member of The Playwrights Center, an alumnus of Youngblood, and a member of Ensemble Studio Theatre and The Ma‐Yi Writers Lab.

Angelica Nwandu, Night Comes On (Feature Film Program) – Angel is released from juvenile hall on her 18th birthday with a single focus: shoot the man who killed her mother. As her rebellious past and empty future confront her at every turn, her plans derail and Angel becomes what she wanted and feared.

Originally from Nigeria, Angelica Nwandu has travelled around the world as an advocate for foster youth after her own experience living in foster care for 12 years. A recent graduate of Loyola Marymount University, she is a writer, a spoken-word poet who has performed nationwide, the owner of her own fashion boutique, and she serves on the board of the Fostering Change Organization, which seeks to define the culture of foster youth. Angelica is a co-writer of Night Comes On, which was selected for participation in the Sundance Institute January 2014 Screenwriters Lab and June 2014 Directors and Screenwriters Labs.

Bernardo Ruiz, Recolectores (The Gatherers) (Documentary Film Program) – A group of medical and anthropology students in Latin America revolutionize how human rights violations are investigated globally. Dubbed “unlikely forensic sleuths” in the late 1980’s by The New York Times, the team now identifies the remains of people killed by repressive regimes and political violence in over 30 countries.

Bernardo Ruiz founded Quiet Pictures in 2007 in order to produce projects at the intersection of journalism and cinema. He co-produced the award-winning The Sixth-Section (POV, 2003) and is the director/producer of American Experience: Roberto Clemente (PBS, 2008), winner of the NCLR ALMA Award for Outstanding Made for Television Documentary. He is the director and producer of Reportero (POV, 2013) a gripping look in to the world of Mexican journalists who cover organized crime and political corruption. He is the Executive Producer of the bilingual documentary series, The Graduates/Los Graduados (Independent Lens, 2013), a project of the public media initiative American Graduate.

Sundance Institute is a global nonprofit organization founded by Robert Redford in 1981. Through its artistic development programs for directors, screenwriters, producers, composers and playwrights, the Institute seeks to discover and support independent film and theatre artists from the United States and around the world, and to connect audiences to their work. The Institute promotes independent storytelling as art and as a compelling and powerful way to inform, inspire and unite people. Internationally recognized for its annual Sundance Film Festival, Sundance Institute has supported such projects as Beasts of the Southern Wild, Fruitvale Station, Sin Nombre, The Invisible War, The Square, Dirty Wars, Spring Awakening, A Gentleman’s Guide to Love and Murder and Fun Home. Join Sundance Institute on Facebook, Instagram, Twitter and YouTube.