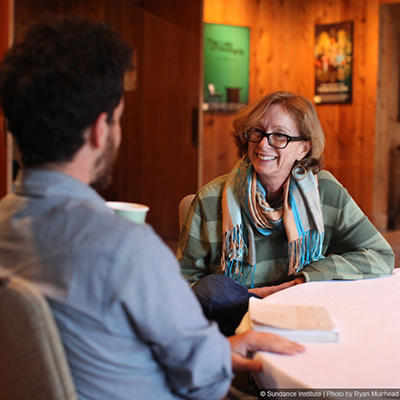 Los Angeles, CA — Sundance Institute today announced a significant expansion of its renowned labs for independent artists to include dedicated support for writers and creators of series for television and online platforms. The first Sundance Institute Episodic Story Lab will be held in Fall 2014 at the Sundance Resort in Sundance, Utah.

Building on the Institute’s 30-year legacy of developing new work from storytellers with distinctive and risk-taking stories, this new initiative addresses the need for more opportunities for learning and mentorship of singular and diverse voices in scripted TV and online series. In collaboration with accomplished mentors, writers at the six-day, immersive Episodic Story Lab will work on developing stories and characters that play out over multiple episodes and will also have the opportunity to better understand the landscape for production and distribution of serialized stories. Both drama and comedy writing will be supported at the Lab, which has been organized under the leadership of Michelle Satter, Founding Director of the Institute’s Feature Film Program. The Lab is made possible by generous support and guidance from television producer Norman Lear and his wife, Institute Trustee Lyn Lear.

Robert Redford, President & Founder of Sundance Institute, said, “Sundance Institute has always worked to develop and support a next generation of independent artists. As more of those artists look to the opportunities in television and online platforms, it is only natural that we expand our labs to address the unique needs of serialized work.”

Keri Putnam, Executive Director of Sundance Institute, said, “Although the opportunities are growing, there are few training grounds for new and diverse voices who want to work in episodic writing. Our lab will offer a rare opportunity for artists to develop unique multi-part projects, working in a setting where they will also learn how to navigate the changing landscape of this field.”

Michelle Satter, Founding Director of the Sundance Institute Feature Film Program, said, “Our world-renowned Screenwriters Lab will serve as a model that will be adapted to identify and develop new writers and stories for the burgeoning opportunities for episodic storytelling on all platforms. We are excited to learn from all of our Lab participants, mentors and creators in the field in our pilot year, and we look forward to building out the year-round support system for our writing fellows, where the program will have the greatest impact.”

For the inaugural year of the Lab, the Institute will consider applicants by invitation only. In future years, an open application process is anticipated. Institute staff will source applicants through extensive outreach to a network of alumni, mentors, industry sources and other artist support programs and diversity initiatives.

In addition to the Episodic Story Lab, the Institute offers labs throughout the year and around the world for independent directors, screenwriters, documentary editors, composers, playwrights, producers and New Frontier artists.

The Sundance Institute Feature Film Program
Since 1981, the Sundance Institute Feature Film Program (FFP) has supported more than 800 independent filmmakers whose distinctive, singular work has engaged audiences worldwide. The program’s approach to the discovery and development of independent artists has become a model for creative development programs internationally. Program staff fully embrace the unique vision of each filmmaker, encouraging a rigorous creative process with a focus on original and deeply personal storytelling. Each year, up to 30 emerging artists from the U.S. and around the world participate in a year-round continuum of support which can include the Screenwriters and Directors Labs, Creative Producing Fellowship and Lab, Music and Sound Design Lab, Creative Producing Summit, ongoing creative and strategic advice, significant production and postproduction resources, a Rough-Cut Screening Initiative, a Screenplay Reading Series, and direct financial support through project-specific grants and artist fellowships. In many cases, the Institute has helped the Program’s fellows attach producers and talent, secure financing, and assemble other significant resources to move their projects toward production and presentation. In addition, the FFP is providing strategic resources to completed Lab films in distribution and marketing across all platforms to support and expand their connection to audiences worldwide.