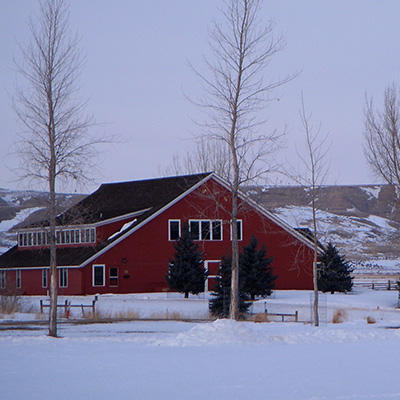 New York, NY — The Sundance Institute Theatre Program has begun the 2013 Playwrights Retreat at Ucross Foundation. The 13th annual writing colony at the 20,000-acre working cattle ranch outside of Sheridan, Wyo. takes place through February 22 and provides a supportive environment for artists to create new work and receive guidance and reactions to it at an early stage. Under the supervision of Philip Himberg, Artistic Director of the Theatre Program, and Producing Director Christopher Hibma, the Playwrights Retreat is made possible through the generosity of Ucross Foundation.

Notable artists and projects supported through the Playwrights Retreat program include A Gentleman’s Guide to Love and Murder by Steven Lutvak and Robert L. Freedman (Hartford Stage Company and La Jolla Playhouse), Song for the Disappeared by Tanya Saracho (Goodman Theater, Chicago), ToasT by Lemon Anderson (Under The Radar), and Appropriate by Branden Jacobs-Jenkins (Humana Festival).

As previously announced, the six artists selected for the 2013 Sundance Institute Playwrights Retreat at Ucross Foundation are:

Sundance Institute Theatre Program
The Sundance Institute Theatre Program is one of the nation’s leading nonprofit organizations that champions theatre artists and their plays as a source of vital, challenging and diverse ideas in society. Through the guiding principles of risk-taking, experimentation and freedom of expression, the Theatre Program is the recognized leader in providing developmental laboratories rarely available to contemporary artists. The Theatre Program has been a core component of Sundance Institute since Robert Redford founded the Institute in 1984, and is led by Artistic Director Philip Himberg and Producing Director Christopher Hibma. Titles such as Spring Awakening, An Iliad, I Am My Own Wife, The Good Negro, Circle Mirror Transformation, Passing Strange, Grey Gardens, Crowns and Marie Antoinette have gone from Theatre Program Labs to production from coast to coast and internationally, garnering multiple Pulitzers, Tonys, Obies and other recognition. The Theatre Program’s East Africa initiative is the only professional program of its type on the continent, offering Labs, cross-cultural exchange, mentorship and exposure to artists in six African countries. www.sundance.org/theatre

Ucross Foundation
Founded in 1981, Ucross Foundation is an internationally known retreat for visual artists, writers, composers and choreographers working’in all creative disciplines. It provides living accommodations, studio space, uninterrupted time and the experience of the extraordinary High Plains landscape to competitively selected individuals. Ucross supports individuals whose work reflects innovative thinking, a depth of creative exploration, and the potential for significant future accomplishments. A number of residents have won recognition such as the Pulitzer Prize, the Tony Award, the National Book Award, the MacArthur Fellowship, the Guggenheim Fellowship and many other honors. Through its Residency Program, art gallery, and associated activities, Ucross actively seeks to support an appreciation for vibrant human creativity and aims to cast a reflection into the future from the cultural mirror of our lives and times. www.ucrossfoundation.org