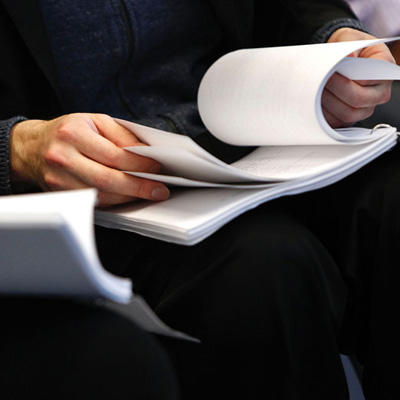 Los Angeles, CA — Sundance Institute has selected 12 projects for its annual January Screenwriters Lab, an immersive, five-day (January 13-18) writers’ workshop at the Sundance Resort in Utah. Participating independent screenwriters – drawn from around the world, including the United States, China, South Africa, and Europe – will have the opportunity to work intensely on their feature film scripts with the support of established writers in an environment that encourages innovation and creative risk-taking.

Michelle Satter, Director of the Sundance Institute Feature Film Program, said, “We are very excited to support these filmmakers who are giving voice to a world in transition with a diverse range of stories, genres and contemporary themes. Fueled by their creativity and a deeply personal stake in these stories, the filmmakers are infusing their scripts with rich characters, authentic worlds and uniquely singular visions.”

“Our Feature Film Program continues to build its legacy of identifying and supporting innovative artists, and each of these projects holds potential for contributing to that legacy in new and different ways,” said Keri Putnam, Executive Director of Sundance Institute. “The January Screenwriters Lab is the first step in a year-round program of creative and strategic support that has recently expanded to include a robust plan to help filmmakers connect to ever-increasing audiences.”

Jonas Carpignano (writer/director) / A Chjàna (Italy/U.S.A.): After leaving his native Burkina Faso in search of a better life, Ayiva makes the perilous journey to Italy; though he finds compatriots along the way, they are unprepared for the intolerance facing immigrants in their newly-claimed home.

Jonas Carpignano is an Italian-American filmmaker currently based in New York City and Rome. While raised and educated in New York, he has spent periods of time in Italy where he began his career working as an assistant director. Since enrolling at NYU’s Tisch School of the Arts, Carpignano has made several short films that have screened in numerous prestigious festivals throughout the world. Recently, he was awarded the Martin Scorsese Young Filmmaker Award, and his latest short film A Chjàna won the Controcampo Award for Best Short Film at the 68th Venice Film Festival.

Ioana Uricaru (writer/director) / After the Wedding (U.S.A./Romania): Mara, a Romanian immigrant with a young son, soon discovers her recent marriage to an American is not enough to secure their place in the country. As she learns more about the system, an unfamiliar culture, and her husband, she must decide how far she will go to preserve her new family.

Ioana Uricaru was born and raised in Romania, relocating to Los Angeles in 2001. She co-directed the Romanian omnibus Tales From the Golden Age (Official Selection, 2009 Cannes Film Festival) and her short film Stopover premiered at the 2011 Sundance Film Festival. In addition to After the Wedding, Uricaru is currently developing the feature Paperclip, which was a recipient of the 2011 Sundance/Sloan Commissioning Grant.

David Lowery is a filmmaker from Texas. His work, including the award-winning short film Pioneer, has screened and won awards at film festivals around the world, including Sundance, SXSW, Festival Internacional de Cortos FIB (Spain), and Ashland Independent Film Festival. Filmmaker Magazine named him one of the 25 New Faces of Independent Film in 2011.

Marielle Heller (writer/director) / Diary of a Teenage Girl (U.S.A.): In the haze of 1970’s San Francisco, a teenage artist with a brutally honest perspective tries to navigate her way through an affair with her mother’s boyfriend. Adapted from the graphic novel by Phoebe Gloeckner.

Marielle Heller is a New York based screenwriter, actor and playwright. Her theatrical production of The Diary of a Teenage Girl premiered in New York City in 2010 at 3LD in association with New Georges. Along with writing partner Caitlin Goldberg-Meehan, Heller has written a pilot for ABC titled The Big Apple, and is developing a movie for the Disney Channel. As an actor, she has performed in theatre all over the world, including at Berkeley Rep, The Barbican in London, Birmingham Rep, Soho Rep, San Diego Rep, and Magic Theater.

Ryan Coogler (writer/director) / Fruitvale (U.S.A.): Fruitvale is the true story of Oscar, a 22-year-old Bay Area resident, who crosses paths with friends, enemies, family, and strangers on the last day of 2008.

A filmmaker from the Bay Area, Ryan Coogler spent most of his life dodging tackles on the football field before discovering a love for making movies in college. After earning a degree in Finance from Sacramento State, he headed south to attend USC’s MFA program, where he made several award-winning short films including Locks (Tribeca Film Festival, Dana and Albert Broccoli Award for Filmmaking Excellence), Gap (Jack Nicholson Award for Achievement in Directing), and Fig (HBO Short Filmmaking Award, DGA Student Filmmaker Award). After graduating, he returned home to Richmond, California, where he works as a guidance counselor for juvenile delinquents.

Chloé Zhao (writer/director) / Lee (U.S.A): As his two best friends plan to leave for college, a Lakota teen wonders if his future on the reservation is pre-ordained when a tragedy forces him to take dangerous action to protect his family.

Susanna Fogel (co-writer/director) and Joni Lefkowitz (co-writer) / Life Partners (U.S.A.): A straight girl drunkenly promises her lesbian best friend she won’t get married until gay marriage is legal – a promise that becomes awkward when her boyfriend proposes and her friend remains a slacker who’s years away from even thinking about marriage.

Susanna Fogel and Joni Lefkowitz have co-written several scripts for film and television, most notably The Washingtonienne for HBO, What Was I Thinking? for New Line and Lynda Obst Productions, and an original web series for Warner Brothers entitled Joni and Susanna, which Lefkowitz produced and Fogel directed. They are currently developing an independent comedy It Is What It Is, which is set to star Evan Rachel Wood, Olivia Thirlby and Sigourney Weaver.

Daniel Mulloy (writer/director) / Mitrovica (Great Britan/Kosova): In post-war Kosova, an Albanian woman scavenges with her young son; when she is approached by a Serbian stranger, she doesn’t realize his offer of help will ultimately tear her life apart.

Daniel Mulloy’s short films, including Baby, Dad, and Antonio’s Breakfast, have premiered at the Sundance Film Festival and between them won over ninety international awards, including several BAFTAs, a BIFA and a European Academy Award nomination. In addition to Mitrovica, Mulloy is currently developing the feature film A Cold Day with Focus Features; both films will star Arta Dobroshi.

Logan Kibens (co-writer/director) and Sharon Greene (co-writer) / Operator (U.S.A.): In this existential comedy, when a programmer is hired to create the ideal personality for an automated call center, his attempts to quantify what it means to be human throws his life into chaos.

Logan Kibens has written and directed over 50 short films. She was awarded the 2011 HBO/DGA Directing Fellowship and was selected as one of Film Independent’s 2011 Project:Involve fellows after completing her CalArts thesis film, Recessive. The short has screened nationally and internationally at film festivals including Outfest, Frameline, Reeling, and Zinegoak, among others. Kibens worked as a commercial editor for eight years, and is an award-winning projections designer for theatre and dance.

Sharon Greene is a Chicago playwright turned screenwriter. Her play, Fake Lake, was on the
Best Plays of 2008 list of both Time Out Chicago and The Chicago Tribune, and was supported by a grant from the NEA. A recent graduate of USC’s Writing for Screen and Television program, her original television pilot Cherryland was nominated for the Student Humanitas Prize for Drama.

Pengfei Song (writer/director) / Underground Fragrances (China): As Beijing races to keep up with China’s growth, and its poor are pushed underground to live in crude tunnels, a young migrant worker finds community and compassion, putting a human face on China’s rapid development.

Pengfei Song was born into a family of Peking Opera performers in Beijing. After graduating from high school, he went to Paris to study film directing at L’Institute International Image et du Son. Upon his return, he discovered a new China, which inspired him to develop Underground Fragrances to reflect the changing lives of the people of Beijing. The project, which will be his first feature, was selected for Cinemart and the TorinoFilmLab in 2011.

Etienne Kallos (writer/director) / Vrystaat (Free State) (South Africa): Set during the annual corn harvest in the Free State, Vrystaat explores the rites of passage into manhood for a new generation as they navigate identity and sexuality within the fractured realm of post-Colonial Africa.

Etienne Kallos is a Greek/South African filmmaker with an MFA in film directing from NYU. His work has screened at festivals worldwide, including Sundance, Cannes, Berlin, and Telluride. His film Eersgeborene was the first Afrikaans-language film to be awarded a Lion for Best Short Film at the 2009 Venice Film Festival. He recently developed Vrystaat at the Cannes Cinefondation Residence program in Paris.

Adam Mansbach (writer) / We’re Entertainment (U.S.A.): On the Gulf Coast of Florida, a failed actress working as a children’s party entertainer shows the new guy the ropes; together they share a day that changes them both in unexpected ways.

Adam Mansbach’s most recent book, Go the Fuck to Sleep, was a #1 New York Times bestseller. His novels include The End of the Jews, winner of the California Book Award, and Angry Black White Boy, which is taught at more than a hundred universities. His work has appeared in the New York Times Book Review, GQ, Esquire, The Believer, and on National Public Radio’s All Things Considered. He has a graphic novel and two other novels forthcoming, as well as a sitcom in development at CBS.

Sundance Institute Feature Film Program
Since 1981, the Sundance Institute Feature Film Program (FFP) has supported more than 600 independent filmmakers whose distinctive, singular work has engaged audiences worldwide. The program’s approach to the discovery and development of independent artists has become a model for creative development programs internationally. Program staff fully embrace the unique vision of each filmmaker, encouraging a rigorous creative process with a focus on original and deeply personal storytelling. Each year, up to 30 emerging filmmakers from the U.S. and around the world participate in a year-round continuum of support which can include the Screenwriters and Directors Labs, Composers Lab, Creative Producing Fellowship and Lab, Creative Producing Summit, a Work-in-Progress Screening Initiative, a Screenplay Reading Series, the Feature Film Program Fund, offering direct financial support through named grants, awards, and artist fellowships, the Artist Services program, a new initiative providing strategic resources for crowdfunding and digital distribution, and ongoing creative and strategic advice. In 2011, the FFP created the New Frontier Story Lab, supporting innovative artists developing projects across multiple platforms, emphasizing the convergence of storytelling and technology.