Q&A: Behind the Scenes with Twelve’s Cast and Crew 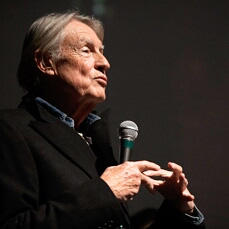 Twelve is about a coterie of super-rich teens in Manhattan whose ambition is blunted by their vanity and overweening social climbing. They go around the city saying things like, “My dad told me if I don’t get into Harvard, I have to go to Dartmouth” and “Dad’s so pissed I totaled the Porsche.”

Among this crew of largely non-likable little twerps are Molly (Emma Roberts), Chris (Rory Culkin), and White Mike (Chace Crawford); White Mike is the protagonist, a once-promising kid who now supplies his friends and acquaintances with the drugs they can easily afford, except for the vicious cocktail of drugs named twelve (so dangerous he refuses to sell it).

Molly, Chris, and White Mike struggle, to one degree or another, to emerge from the moral vacuum of their upbringing. A healthy showing of 11 cast members, including Crawford and Curtis “50 Cent” Jackson, joined director Joel Schumacher and Nick McDonnell, the author of the novel Twelve the film is adapted from, after the film’s closing-night premiere at Eccles Theatre.

Q: Is the drug a compilation of many drugs?

Schumacher: We’ll be selling it in the lobby (laughter). It’s a fictional drug Nick [McDonnell] made up. You can make it up to be whatever drug you want, but obviously it is instantly addictive and kind of like liquid crack, I guess you would say. But anyway, I won’t go into my extensive drug history.

Q: Why did Nick McDonnell write this at the age of 17?

McDonnell: I was an extremely pissed off 17-year-old. And that was really the reason. But this [premiere] is really about the movie. The book is a very different thing; it’s minimalist—it’s not this huge opera. I mean, look at this (pointing to all the cast members onstage).

Q: You kept the narration from the book—why?

Schumacher: The most poetic, the good stuff, is Nick’s. We tried to stay very true to the book; most of the narration is from the book and Kiefer [Sutherland, who narrates the film] did a very good job.

Q: Is the death scene at the end based in reality?

McDonnell: No. The book is based on the mythology of the high school I went to. There is this mythology of privilege and violence and greed and drug use that circles around that prep school world, and the book came out of that but there are very few direct correlations.

Schumacher: I think unfortunately it’s really a story in high schools and towns and groups of young people. We know it’s not only the privileged. This is actually a movie about bad parenting (applause). Hence you rarely see them, and their solutions to problems are not helping and it’s a world where celebrity is valued above accomplishment and materialism is valued over humanity and that’s unfortunately going on a lot in our Western culture. Certainly not everyone in the film is damned.

Q: Do you prefer to work with a big budget or a small one?

Schumacher: The problem is this—when you have a very big budget, it’s never as much as you should have. The problem when you have a very big budget is they expect huge audiences. So you’re carrying the weight of what’s called a tentpole movie at a studio, which means that they’re projecting incredible numbers that are attached to your movie, and that’s a really, really big weight to carry around and I’ve been lucky that it got pulled off several times.