From the Archives: The History of Sundance Institute’s Documentary Film Program 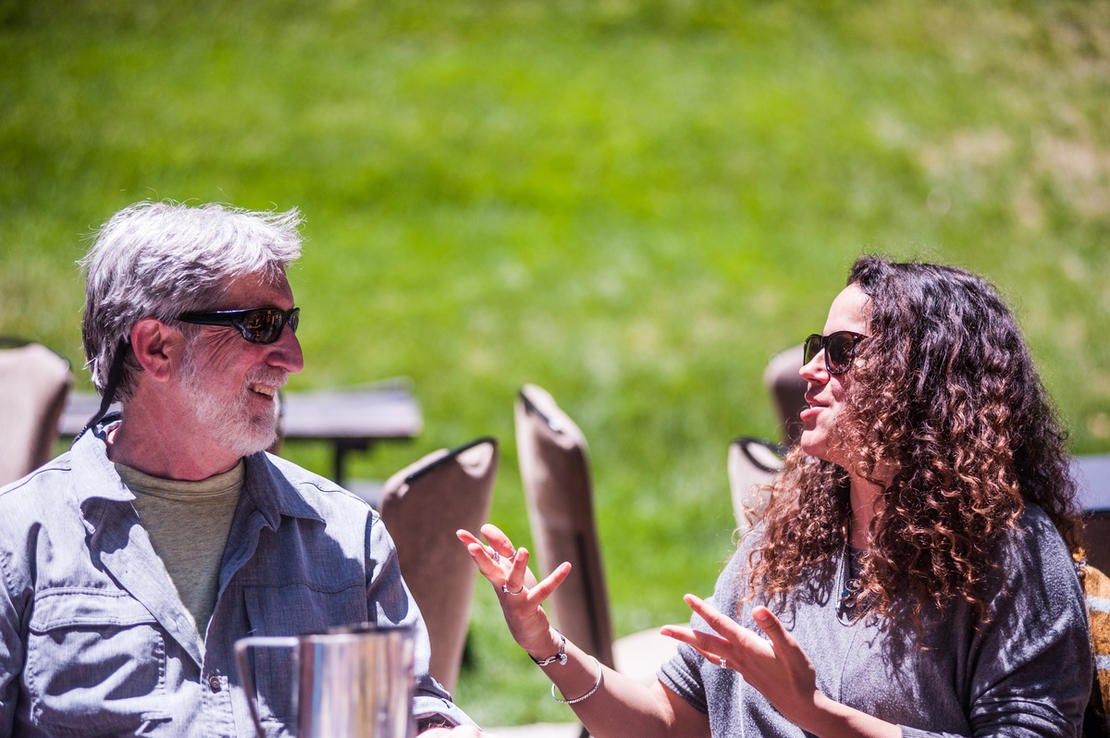 [Editor’s Note: One of our favorite things about celebrating 20 years of Sundance Institute’s Documentary Film Program is reflecting on the powerful leaders that the program has had at the helm. To start our final full week we’re sharing former director Cara Mertes’s knowledgeable look back at the first decade of the DFP. This piece was originally published on July 13, 2011.]

This month, Sundance Institute is spotlighting the Documentary Film Program and its dedication to supporting contemporary-issue nonfiction storytelling. Keep an eye out for stories from the recently completed Doc Edit Lab and the Composer and Documentary Lab, as well as an inside look at the role of the editor in documentary filmmaking. Below, DFP Director Cara Mertes looks back at the Documentary Film Program over the last decade, and how it is evolving as a global resource for contemporary documentary filmmaking.

Robert Redford created Sundance Institute knowing that creativity, a fragile but fundamental impulse, can easily be sacrificed to the demands of power in all of its forms, whether market or military, government, community, faith, or family.

He wanted to conjure a space that was safe for experimentation, protected from purely profit-driven motives. Within that vision, it has long been Redford’s consistent belief that documentary has a special role socially. It has the capacity to tell truths that are otherwise ignored, misunderstood or avoided, and it can do so in an entertaining and inspiring way.

This motivated him to make an early and unusual decision to platform documentary on an equal basis with independent narrative film when he started the Sundance Film Festival in the early 1980s. The Festival has been a pioneering force in popularizing independent contemporary documentary as an art form ever since, and in 2001, the opportunity came to build an artist’s support program for documentary at the Institute, alongside the existing feature film, theatre, native, and composers labs, and it seemed a natural next step.

We need to know that our innate belief in individual rights, democracy, and freedom of expression will be respected by the political and business power brokers. And when that doesn’t happen, we need to know why.

The Sundance Institute Documentary Film Program was born out of the Soros Documentary Fund, which Diane Weyermann spearheaded in the mid-1990s at Open Society Institute. Her vision of a fund focused on human rights and social justice topics was supported by human rights leader and OSI executive director Aryeh Neier.

They believed that nonfiction films could be effective at raising awareness and creating momentum around human rights issues. They were right, and this was a seminal moment for independent documentary. The Soros Documentary Fund became one of the first global funds for documentary focused solely on human rights, and it supported films that went to public television, cable, theatrical screening and were seen internationally.

Part 2: Cara Mertes Comes on Board

I joined Sundance Institute in 2006 as director of the DFP, with a passion for independent documentary’s pivotal social role, and a long career dedicated to supporting independent films, filmmakers, and the field. At public television and as an independent producer and director, I worked to bring the margins to the mainstream, building a bridge between the experimentation of artists, and the interests of audiences by creating, curating, funding, and broadcasting independent film of all kinds, with a special focus on documentary as both an art form and an increasingly crucial democratic function.

Because Sundance Institute and public television have both been trailblazers in contemporary-issue storytelling in building several generations of audiences, exposing stories that otherwise would remain in the shadows, and nurturing talent, for me, the transition to Sundance Institute seemed rife with possibility.

Since 2006, much has changed, yet much has remained the same for indie doc makers. The world is more interconnected, networking capabilities, and digital technologies are revolutionizing every aspect of our lives, and the challenges we face globally are daunting. What has remained the same is the way that story connects all of us.

The combination of urgency, connectedness and inter-dependency that has marked the early days of the 21st century has resulted, broadly, in more people telling more stories about more realities than ever before, and nonfiction is a rising tide in this sea of stories. What hasn’t kept pace is funding and distribution mechanisms that ensure that these films are made at their highest potential, and that audiences can reliably and consistently find them. These are the areas that define our work today.

The DFP has kept its original human rights DNA, while expanding to contemporary documentary more broadly, and we have prioritized three things in the past few years: the increasingly global scope of our work; the need to create effective and strategic collaborations and partnerships internationally which reinvent and redefine resources and infrastructure for documentary, and most importantly, continuing to deepen and expand the creative and financial support of documentary artists, as Robert Redford mandated 30 years ago.

DFP activities now include granting about $1.5 million annually in funding for film projects in all phases of production, extended creative support for 60 to 80 documentary creatives annually through signature labs, screenings and workshops and consultations, and creative partnerships to grow the field, its infrastructure, and its impact globally. We work around the world, on many contemporary topics, and in a range of storytelling styles. To date, the DFP has supported more than 500 of the best contemporary issue films produced since 1995.

Central to keeping our work relevant and vibrant is experiencing the emerging global network of nonfiction film and filmmakers, and to do this, the DFP travels. A lot. My passport pages are full now, and I, with my colleagues at Sundance Institute, have circled the globe a dozen times. We do things like go to Calcutta, Damascus, Bogota, or Beijing for a weekend to work with filmmakers.

It’s a very long trip, but when we get there, we know we will meet dozens of artists over the course of three days in a filmmaker forum, a festival, or perhaps a workshop. We are also present at the key documentary funding forums in the developed world, including markets and gatherings where films in production are seeking help. Our brand brings prestige to activities and regions that need to be established, our funding helps support emerging and experienced filmmakers, our feedback helps to hone the artist’s intention.

Each trip builds a conversation that increases resources, skills, and opportunities for filmmakers who are eager to work with documentary as their form of creative expression. Because the demand for documentary skills and knowledge is manifesting in every region of the world, increasingly we find that we are a kind of cultural ambassador in these settings. And in our work supporting infrastructure, we focus on areas where interest is high, and resources for documentary are at their most fragile; places like China, the Middle East, and India. We take these learnings and bring them back to the U.S., where we continue to support a significant number of projects. This exchange between established and emerging documentary traditions is key to our efforts.

We do all of this because an artist’s work is necessary. Artists are awake to the reality of the human condition; to the rage of injustice and insignificance; to the capacity for the deepest form of compassion; to the simple truths of ‘now’ and the poignant promise of ‘maybe one day.’ They are an insistent voice breaking through the false promise of complacency. We see that film is becoming one of our global languages, which I believe it is linked to the fundamental need we now have as a global society for greater cross-cultural awareness, coupled with the need to find solutions to challenges that are on course to change how we as humans live.

Visual storytelling is how we convey to each other our worst circumstances and our best ideas. Exchanging these stories is key to our being able to make the best choices for the future, and whether we like it or not, we are the generation that is tasked with a great burden.

As Paul Hawkens says, we are the ‘civilizational’ generation—we are the first generation in human history that will determine the fundamental nature of future civilizations, within the span of our lifetimes. If filmic storytelling is proving to be the language of the 21st century, I believe that the emergence of contemporary-issue nonfiction narratives can be attributed to the early and ongoing insights about film and its impact which largely emanated from the human rights and social justice fields as they began to understand the deep and powerful relationship between story and change.

At its best, storytelling helps us recognize our deepest human potentials; it reminds us that we are capable of meeting our challenges in ways that respect human dignity, not destroy it. To accomplish this necessary task, we don’t need just individual brilliance–we need aggregated intelligence moving at great speeds among vast numbers of people. Documentary storytelling, in the newly wired world, helps us achieve this efficiently and effectively, by binding us as temporary communities as we experience these kinds of stories individually and in groups. They give us a common language, and allow us to feel sympathy and even empathy for others’ circumstances. And that can create conditions for systemic and impactful change.

Increasingly, the work of culture is helping us understand the interconnectedness of our existence. These sound like grandiose words, but in the 21st century they are simple truth. We are shifting from a world where we don’t understand the implications of our actions into a world in which we must take responsibility for the decisions that we make each day. And that means we have to tell the challenging, provocative, and moving stories that can guide us as we envision and implement the future world. Though we live in a time where market forces are privileged, artists are the true prophets and poets of our age. It is the gift of creativity to show truths that are otherwise hidden or unknown and to fuel humanity’s natural tendency towards evolution, not stasis.

I’ll leave you with this thought from Robert Redford. “We need to know that our innate belief in individual rights, democracy, and freedom of expression will be respected by the political and business power brokers. And when that doesn’t happen, we need to know why.” For Sundance Institute’s DFP, these remain our guiding principles.