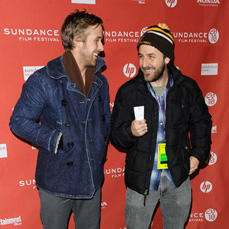 Director Derek Cianfrance juxtaposes the realistic highs and lows of romance in his moving film, Blue Valentine. The audience first meets Dean (Ryan Gosling) and Cindy (Michelle Williams) just as their marriage begins to unravel. Dean whisks them off to a themed hotel with hopes of reviving the relationship, and just before they arrive, the audience is transported back in time, to witness how the couple first fell in love. As the story seamlessly weaves in and out of past and present, the mood grows bittersweet as the audience is ultimately left with the mystery of love’s bloom and subsequent disintegration.

Did you always plan to tell the narrative as two stories happening at the same time?

Derek Cianfrance: Yes, it was always going to be told on these parallel tracks. One of my favorite movies is Godfather II, and how it had the two stories going on at once. It goes back to the idea of the crosscut. I’m interested in duality and juxtaposition. Like magnets, or two sides of a coin. I wanted to make a movie like that – this duality in life.

How did the score play a part in the film?

DC: The score of the movie is done by Grizzly Bear. I’m a big fan of theirs – all of us are. It took a lot of time to get this film made, and I spent a lot of time dreaming about it, and imagining it. My film teacher Phil Solomon introduced me to Grizzly Bear and I spent a lot of time listening to them. The music seemed so cinematic and visual. There’s only a score in the past section of the movie, the love story. It was important to me that in the present-day story of the movie there wasn’t any manipulation, that it was all on the actors’ shoulders. There was no out for them, or way for the music to manipulate your emotion.

Was the tattoo on Dean’s arm significant? Was it the Giving Tree?

Did you try to make the characters sympathetic?

DC: I never understood this idea of sympathetic or unsympathetic characters. Because everyone I’ve ever known in my life is like both at the same time. When I met my wife Shannon I told her I was like Dr. Jekyll, but eventually I was going to be like Mr. Hyde. Because that’s in me. When you know somebody you get to know their lightness and their darkness. This movie is about that contrast. It’s honest. We all go down to the basement and do things we’re not proud of, but that’s what makes us human. So I don’t judge any character for anything they do.

Where did the storyline come from? What’s the inspiration?

DC: When I was a kid, I had two nightmares: One was that there would be a nuclear war and the other was that my parents would get a divorce. My parents did divorce when I was 20, and it made me question a lot of things in my life. And question the point of falling in love. … As I’ve gone forward in my life, trying to make my own family and relationships, this was something I felt like I had to deal with – that fear inside of me. I always felt like when they did split up it was ultimately the best thing for both of them. It was extremely painful to go through that but with pain comes catharsis. It’s partly why the film took 12 years to make, because I was going through that. But I knew I’d finish it before I die (laughter). I’m thankful it took as long as it did to finish; my life experiences formed it.