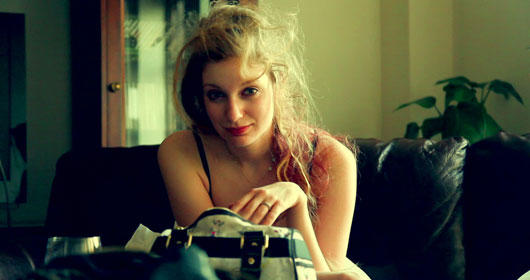 I Love Your Work, by Jonathan Harris, played in the New Frontier section at the 2014 Festival.

As I reflect on my tenure with Sundance Institute’s New Frontier Story Lab, I’ve been considering some ways innovation is advancing the art of storytelling into the future (the future is now, after all). The role of “new” technology in the process may surprise you; new technologies are exciting tools building on the rich foundation of storytelling and experimentation. Here are 5 things I can definitively say are pushing the hand of progress.

One might protest that the Internet is not so new. But filmmakers and artists are using online interactive immersive experiences to share narratives in new ways, using new web technologies. They are building on the work of pioneers from just a few years ago, who were using online story designs like “dots on a map,” as featured in an inaugural New Frontier Story Lab project, Reinvention Stories.

Canada? Yes indeed, through the National Film Board of Canada interactive, the public producer of artistic, inventive, and socially relevant audiovisual content. In the emerging New Frontier marketplace, support, financial and otherwise, is crucial, and the forward-thinking NFB has created fertile ground for development.

Games generally are a universal part of human experience across cultures. Indie video games are using new and often surprising kinds of experiences and content to experientially share narratives. The original ARG (Alternate Reality Game), The Beast, was the seed of what people began to think of as transmedia (many of the original creators formed 42 Entertainment, helmed by CEO and New Frontier Story Lab creative advisor Susan Bonds). Even no-tech board games are au courant these days. Personally I’m very curious to see what the new ARG/LARP (Live Action Role Play game) looks like.

Perhaps again you say, “this is nothing new!” But we’re discovering new possibilities and roles as technologists converge with more traditional storytellers to forge unique and fertile creative relationships. Creative technologists with a background in storytelling as well as technology deepen the potential of both. At the CalArts graduation ceremony this year, speaker John Lasseter, an early proponent of computers in animation, and now the Chief Creative Officer at Pixar and Walt Disney Animation Studios, described artistic collaboration not as fighting for ever-smaller pieces of the pie, but the making of a bigger pie.

Finally, the truly “technological” on this list, this Virtual Reality is not the “virtual” of the 1990s. When Nonny de La Peña debuted Hunger in Los Angeles at the Sundance Film Festival in 2012 with Oculus Rift creator Palmer Luckey, the headset was already capturing the minds of developers—and artists–before being bought by Facebook in a $2 billion deal.

Data I Want You To Want Me; Flight Patterns

Installation Evolution of Fearlessness; What’s He Building in There

Performance This World Made Itself; Untitled Opera About Robert Moses and Jane Jacobs

Ruthie Doyle served as the inaugural New Frontier Story Lab Intern from September 2013 to May 2014. She is a filmmaker currently based in Los Angeles. Often lyrical and impressionistic, her work makes a non-literal exploration of issues surrounding family, memory, identity, gender and sexuality. Ruthie’s past work includes interactive screen pieces: for performance via physical computing, and for audience engagement using mobile phones. She is also influenced by her social justice activism and work in health and healing.