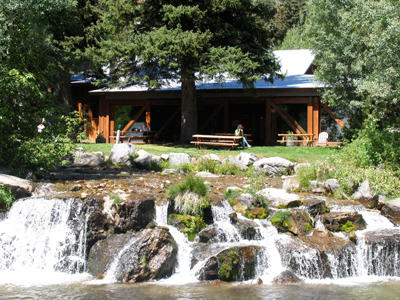 Nine projects have been selected to participate in the Labs (July 18-22) and receive ongoing creative and strategic support throughout the year, as well as direct granting to further development and production. The Fellows represent five projects from the Feature Film Program and four from the Documentary Film Program.

Immediately following the Labs, leaders in independent film and a wider group of Sundance Institute-supported projects will join the Fellows for the Creative Producing Summit (July 22-24).

“The Sundance Institute Creative Producing initiatives are a unique combination of intensive focus on the producers’ individual projects and larger discussions with industry leaders about the state of the independent film community and where it’s headed,” said Keri Putnam, Executive Director of Sundance Institute. “These initiatives are an opportunity for producers to explore and develop their projects in a forward-thinking, supportive community. We thank the many experts that will participate.”

The Fellows and projects selected for the Feature Film Creative Producing Fellowship are:

Ain’t Them Bodies Saints
Producing Fellows: James M. Johnston & Toby Halbrooks
Ain’t Them Bodies Saints tells the story of an outlaw who, in the 1970s, escapes from prison and sets out across the Texas countryside to reunite with his wife and the daughter he never met. Along the way, however, his past starts to catch up with him. (Writer/Director: David Lowery)

James M. Johnston and Toby Halbrooks, collectively known as Sailor Bear, produced the award winning and critically acclaimed short film Pioneer.  Johnston also produced the feature films St. Nick and Carried Away, operates two successful vegan restaurants with his wife, and has directed and produced several short films of his own. Halbrooks came to film after touring the world for six years as a member of the rock group The Polyphonic Spree. He has been working in Dallas as a commercial producer/director for the last 6 years.

One & Two
Producing Fellow:  Kim Sherman
Set at an isolated farmhouse, One & Two is a look at the bond between siblings in an abusive and neglectful home, told through a sci-fi lens. (Director Andrew Droz Palermo, Co-Writers Andrew Droz Palermo & Neima Shahdadi)

Kim Sherman is a Missouri-based filmmaker and musician. Most recently, Sherman produced the feature A Horrible Way To Die from director Adam Wingard and Sun Don’t Shine from Amy Seimetz. Sherman has won numerous advertising awards for her directorial commercial work and produced a handful of daring and groundbreaking narrative shorts, including the experimental drama, A Face Fixed, by director Andrew Droz Palermo. Sherman serves as one half of the psych-folk duo, Jerusalem and the Starbaskets. Their latest full-length album, Dost, is out now on De Stijl Records.

Sadie
Producing Fellow: Lacey Leavitt
A young girl living in a trailer park with her mother while her father serves repeated tours overseas resorts to inappropriate measures to preserve her family when a handsome and mysterious stranger threatens to tear it apart. (Writer/Director Megan Griffiths)

Lacey Leavitt is a Seattle-based producer whose first two narrative features, The Off Hours (director Megan Griffiths) and The Catechism Cataclysm (director Todd Rohal), premiered at the 2011 Sundance Film Festival.  She also produced and co-directed the roller derby documentary Blood on the Flat Track (Strand Releasing) and produced Dan Brown’s award-winning short film Your Lucky Day, starring Rider Strong. She recently co-produced Safety Not Guaranteed, executive produced by Mark and Jay Duplass, and is in pre-production on Hayden Lake, the new feature directed by Ryan Page and Christopher Pomerenke (Blood Into Wine), which she is line producing. (Sheila C. Johnson Fellow)

Participants for the five-day Documentary Film Creative Producing Lab are selected from a pool of Sundance Institute Documentary Film Program grantees and invited to participate in one-on-one consultations, and presentations aimed at honing the craft of producing documentaries.

The Fellows and projects selected for the Documentary Film Creative Producing Lab are:

Ai Wei Wei: Never Sorry
Producing Fellow: Alison Klayman
Ai Weiwei: Never Sorry follows three tumultuous years in the life of Ai Weiwei, when he became a superstar of the art world, a “dissident” in the headlines, a first-time father, and an online god to tens of thousands of Chinese netizens. But can an artist change China?

Alison Klayman is a freelance journalist and documentary filmmaker.  Living in China from 2006 to 2010, Klayman shot and produced radio and television feature stories for programs. Ai Wei Wei: Never Sorry is her first feature documentary. Klayman speaks Mandarin Chinese and graduated from Brown University in 2006.

Betting the Farm
Producing Fellows: Cecily Pingree and Jason Mann
In a desperate attempt to save their farms, a group of Maine farmers launch a new, organic milk company. Will their gamble rescue them – and with them an entire way of life – or will it leave them worse off than when they started?

Cecily Pingree is an independent filmmaker who began her film work with Big Mouth Productions in New York. She has worked on stories ranging from the controversy surrounding media consolidation to rural health in Africa to fishing and farming issues in Maine.

Jason Mann has worked as a cinematographer and editor on numerous documentary projects. Most recently, he collaborated with Cecily Pingree on Meet Your Farmer, a series of eight short films about Maine farmers.

JR: Inside Out
Producing Fellow: Alastair Siddons
The French artist JR wins the TED Prize 2011. He gives his wish, and in turn, his art back to the people, and creates a global participatory art project called ‘Inside Out’. He becomes the ‘printer’ and invites people to stand up for what they care about through the power of their own image. From Tunisia to the Bronx, Lisbon to Iran, the film follows individuals and communities pasting their portraits in the streets. Now they don’t just see the art, they make it.

Alastair Siddons is a London based film maker who has worked across a range of formats including documentary, drama and music video. His first feature was the large scale documentary Turn It Loose. The film followed six b-boys from very different corners of the globe preparing to battle in the world championships held in Soweto, South Africa. The film was produced by Partizan Films and picked up for international distribution by MK2.

My Good Name is Stalin
Producing Fellow: Kavita Pillay
My Good Name Is Stalin is the story of two young men named Stalin and Lenin in Kerala, India – home to the world’s first democratically elected communist government – as they struggle to reconcile their shifting notions about communism and capitalism in the Age of Migration.

Kavita Pillay is a Boston-based media consultant and film producer. My Good Name Is Stalin is her first feature-length documentary.

Since 1981, the Sundance Institute Feature Film Program (FFP) has supported more than 450 independent filmmakers whose distinctive, singular work has engaged audiences worldwide.  The program’s approach to the discovery and development of independent artists has become a model for creative development programs internationally. Program staff fully embrace the unique vision of each filmmaker, encouraging a rigorous creative process with a focus on original and deeply personal storytelling.  Each year, up to 25 emerging filmmakers from the U.S. and around the world participate in a year-round continuum of support which can include the Screenwriters and Directors Labs, Creative Producing Fellowship and Lab, Composers Lab, Creative Producing Summit, ongoing creative and strategic advice, significant production and postproduction resources, a Rough-Cut Screening Initiative, a Screenplay Reading Series, and direct financial support through project-specific grants and artist fellowships. In many cases, the Institute has helped the Program’s fellows attach producers and talent, secure financing, and assemble other significant resources to move their projects toward production and presentation. In addition, the FFP is providing strategic resources to completed Lab films in distribution and marketing across all platforms to support and expand their connection to audiences worldwide.