Meet the Artists: Filming from the Fjords in Nuummioq 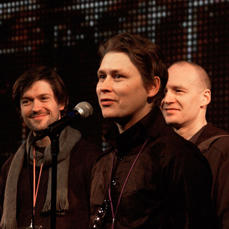 A feature film from Greenland is a true rarity even in the global film festival circuit. So the arrival this year of Nuummioq in the Festival’s World Dramatic Cinema Competition qualifies as an event in itself.

Nuummioq, directed by Torben Bech and Otto Rosing, is a moody character study that follows Malik, a young, introverted construction worker who embarks on a journey that is both physical and spiritual after he is diagnosed with a life-threatening illness.

Avoiding the emotional ups and downs that come with disease-related films, the movie unfolds quietly and with great deliberation. Set amid the varied landscapes of Nuuk, Greenland’s capital city, and the surrounding fjords, the film offers a meditative look into one man’s existential crisis.

Nuummioq (Greenlandic for “a man from Nuuk”) is a polyglot production featuring characters who move effortlessly between Danish and Greenlandic. Bech, who is Danish, wrote the screenplay in Danish and had the cast translate parts of it into Greenlandic. Native Greenlander Rosing and Bech brought together an ethnically diverse ensemble of mostly non-professional actors.

Malik is played by Rosing’s brother, Lars. Bech says he wrote the part with Lars in mind, but the rest of the casting was done in Greenland and among Greenlanders in Denmark.

“I had to take into consideration that most of the actors were amateurs,” says Bech. “I tried to make every scene very simple so it could be acted with the beats coming from the situation rather than from a ‘performed’ change.”

Nuummioq represents the first feature for both directors. Bech was largely unfamiliar with Greenland before making the film and had to rely on Rosing- who currently lives in Nuuk- for local guidance.

“I saw Nuuk for the first time when it was covered in snow and it was so cold that my beard froze to ice. So I had to imagine everything from images,” says Bech. “But Otto knew it from living there and I could see how beautiful and rough the mountains and the ocean looked so I had a pretty good idea and I could see how it would underline our story.”

The vivid cinematography by Bo Bilstrup was made possible in part by their decision to shoot in late summer. “The colors are slightly more saturated than in high summer. It was our desire that we filmed people who were in a magnificent landscape,” says Rosing.

However, the directors said that the landscape is secondary to the character development.

Malik’s reticence can seem opaque at times, but there is a lot going on under the character’s inexpressive surface. “He is traumatized by the death of his parents and the following silence surrounding the death by his grandparents,” says Bech. “So his natural instinct is to be silent when it comes to emotions, and it takes facing his past before he can open up.”

Above all, Nuummioq expresses the filmmakers’ love for their subjects. “I see the film as a love letter to Greenland,” says Bech. “The film can also be seen as a declaration of love for the Nuuk,” Rosing adds.