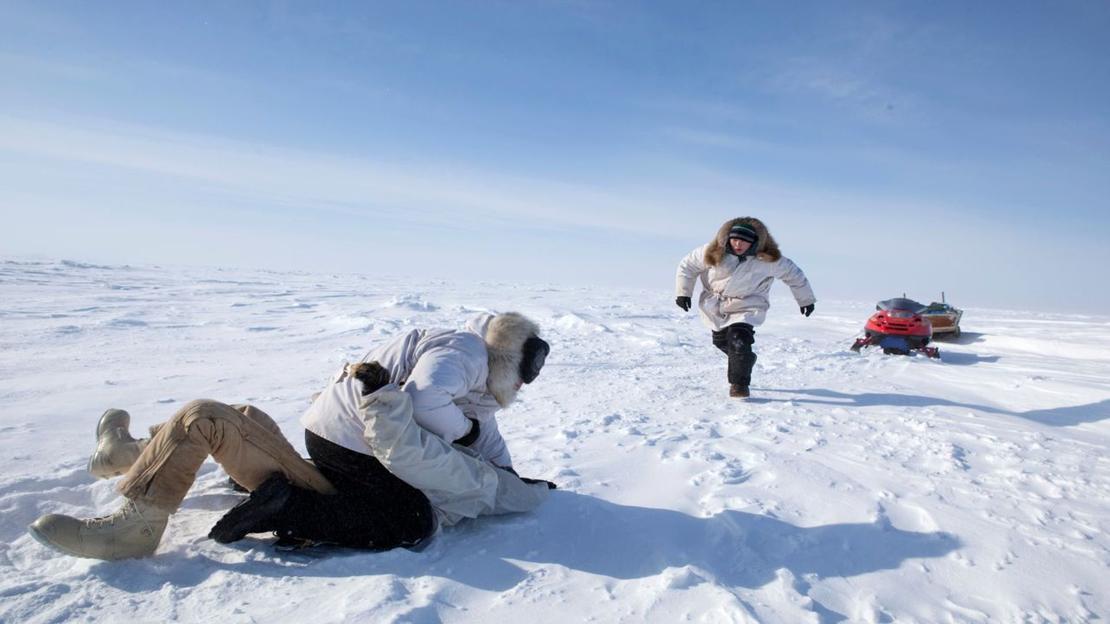 A still from ‘On the Ice,’ a film by Alaska native Andrew Okpeaha MacLean.

Andrew Okpeaha MacLean is an Iñupiaq filmmaker born and raised in Alaska. His short film Sikumi premiered at the 2008 Sundance Film Festival and his debut feature On the Ice screened at the 2011 Festival.

Making a movie 320 miles north of the Arctic Circle is hard. Making any movie is hard, but not many film sets have to deal with things like the threat of polar bears, traveling to set via sled and snowmobile, or the possibility that an entire location, given the right wind conditions, might decide to drift off towards Russia. Not that I’m complaining. It was hard, but fun.

One of the biggest challenges in making On the Ice took place long before we started filming. That was the process of casting. Several things about casting were vitally important to me from the start. First of all, the entire cast had to be Iñuit. I’ve seen way too many films, TV shows, and commercials with Asians, American Indians, or Hispanics cast as Eskimos.

I wanted a cast that deeply understood the world the characters came from. The film is about two Iñupiat teenage boys who have grown up together in a small, isolated village in Arctic Alaska. Life in places like that is fundamentally different from most of the rest of the country. In order to faithfully portray that world I needed actors who knew every facet of their character’s day-to-day experience.

Basically, I was looking for teenage Iñuit actors who grew up in small Arctic villages. A quick consultation with a casting agent confirmed my suspicion that the available talent pool which met those requirements was pretty much zero. If I was going to find a cast for this film, we were going to have to get creative.

So, seven months before we started filming, before we had financing for the film, before we had any idea that we would ever be filming, my producer Cara Marcous and I set out on a casting trip. We had received a sizable grant from the Princess Grace Foundation and used the money to fly to small communities in Arctic Canada and Alaska. For more than two months we flew to places like Kuujjuaq, Iqaluit, Shishmaref, Pt. Hope, Nome, and Kotzebue. One of the places we visited was Igloolik, where I got to hang out with one of my filmmaking heroes, Zach Kunuk, who made Atanarjuat (The Fast Runner).

Everywhere we went we put up flyers, did interviews on local radio, made announcements on CB networks, bought ad space on community scanners, spoke at schools, met people at grocery stores, and generally did everything we could think of to try to persuade people who had never thought about being in a movie to come try out for our film. It wasn’t easy. We Iñuit are not the most naturally outgoing people in the world. We tend to be introverted and reserved by nature. And people living hundreds, if not thousands of miles away from the nearest movie theater are not easily seduced by the celebrity and glamour of film.

Of those we could persuade to audition, we never knew just what we would get. Some were so shy they could barely say their names on camera. Others would tell us their entire life story, the unabridged version. Many times the stories they told us from their lives had an almost eerie synchronicity with the story of the film. Often I would ask them if they knew any good jokes, to loosen them up. The best joke we heard came from a 10-year-old… too dirty to repeat here.

One guy I’ll always remember was at an audition in Fairbanks. He was homeless, sleeping outside under a tarp in temperatures that routinely hit negative 40 degrees. Talk about tough. He was a sweet, intelligent guy who suffered from such extreme anxiety and panic attacks that he couldn’t hold a job. He wasn’t right for any of the parts, but he almost deserves a movie of his own.

The best part about the trip was meeting so many great people, inside and outside the casting room. One of our most memorable evenings was spent in an old, broken down trailer in Shishmaref that had no running water, so we had to improvise the best we could to make a tasty dinner. As luck would have it, we were hanging out with our friend Dennis Davis, who is one of the only foodies I know in rural Alaska. That night he invented a new recipe and a novel technique for making ‘Reindeer Tartare,’ which we documented on video:

While we were in the village of Point Hope, a blizzard blew into town and shut down the airport. We were stuck there for almost a week, waiting for the weather to clear enough for a plane to come in. The weather didn’t clear, but eventually a pilot crazy enough to land in a blizzard flew in. He wasn’t going where we were trying to get to, but we couldn’t pass up what might be the only flight out of town for days if not weeks. So we hitched a ride. Click here for some footage of the storm. Good thing neither of us are afraid of flying.

It was an amazing trip. We met so many cool people, some of whom we still keep in touch with. The whole grassroots, DIY approach to casting is something that transferred through to the entire process of making On the Ice. Every step of the way we engaged the community and in turn relied on them for so much—housing for the crew; donated parkas, snowpants, and warm clothing; sleds and snowmobiles to haul equipment; the actual locations in the film; helicopters; and the extras for the crowd scenes. It just wouldn’t have been possible without a deep level of involvement from the whole town.

We’re trying to keep that spirit of engagement and grassroots outreach alive in the distribution phase as well. Traditional distributors have not been willing to commit to our film, despite the awards we’ve won. But we know there is an audience out there, and we know how to reach that audience. So instead of following the traditional distribution pattern, we’re planning our own release under the Sundance trademark.