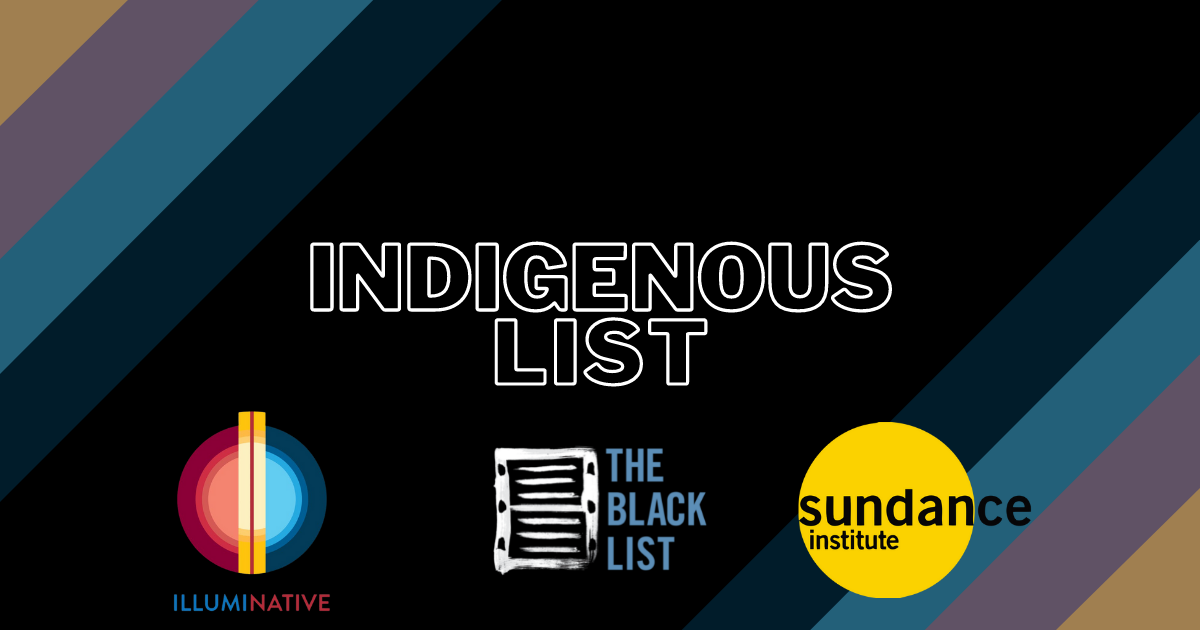 Los Angeles, CA (May 17, 2022) – Today, IllumiNative, The Black List, and the Sundance Institute announced the eight finalists of The Indigenous List. These Indigenous screenwriters represent the best and most promising Native creatives in the film and television industry.

The Indigenous List was launched in 2020 to provide a platform for Indigenous writers to showcase their scripts, create additional pathways and opportunities within the industry, and support the development of the next generation of screenwriters. With the recent release of critically acclaimed Native-authored and centered shows, including Rutherford Falls and Reservation Dogs, as well as complex and powerful films like Wild Indian and Night Raiders, there has been a rise in demand for Native created and led stories.

“The Indigenous List provides an intimate look at the depth of talent and power of Native creatives in the entertainment industry,” said Crystal Echo Hawk, founder and executive director of IllumiNative. “These Indigenous writers are leading the way and showing the power of Native authored stories. I’m so grateful to The Black List, the Sundance Institute, and the Indigenous creatives who are supporting the next generation of Native writers.”

“As always it’s a joy to introduce the industry to a new group of incredibly exciting writers and I personally look forward to watching the films and television shows that will be born of these introductions,” said Black List founder Franklin Leonard. “Everyone should be so lucky as to collaborate with folks like IllumiNative, Sundance Institute, Bird, Michael, Sierra, and Sterlin to do this sort of work. Read these scripts, everyone!”

“My team and I are thrilled again to be a part of showcasing the best work by Indigenous artists working across a variety of genres, formats, and stylistic approaches. The work in this year’s list is a testament to the innovation and creative possibilities of what happens when Indigenous talent makes their own work on their own terms.” said Adam Piron, Director of Indigenous Program.

Taietsarón:sere ‘Tai’ Leclaire (Kanien’kehá:ka) with HOW TO DEAL WITH SYSTEMIC RACISM IN THE AFTERLIFE

Lyle Westman is dead and over it. When he discovers he has to spend 1400 years haunting in redface, he decides to strike back at the systemic problems plaguing the afterlife.

Alex Nystrom (Ojibwe) with BETWEEN

On a mysterious sinking island off the coast of Louisiana, home to a tight-knit Native community, a compulsive man finds himself up against untold tribal secrets, disappearing children, and the unearthing of a repressed traumatic past.

What do you do when your ex writes a song about you and becomes the biggest popstar in the world? If you kidnap your best friend, steal a horse, and crash Good Morning America to confront her were on your breakup bingo card, then you win!

Rose Home Gun returns to her childhood home on the Blackfeet Reservation when ghosts of the past rise to threaten her reality — and her sanity.

Love is a battlefield when a brash, flamboyant, gay Prussian military commander runs into his ex at Valley Forge after he’s hired by George Washington to whip the fledgling American Army into shape during the darkest days of the Revolutionary War. Comps: THE GREAT meets DICKINSON.

When the United States is given back to Indigenous people, two self-involved millennials are forced into a leadership role they didn’t sign up for.

Neil Tinkham (Chamorro) with THE TAOTAOMONA

A child of divorce goes on a hunt to capture a mythical creature that lives in the jungle, serendipitously bringing his family closer in the process.

In San Francisco in the late 1960s, a housewife and mother of three teenagers belatedly discovers her Cherokee heritage and defies her conservative husband — and her Cherokee father — to join the Red Power and feminist movements.

Additionally, we are pleased to share the following updates for alumni of the very first Indigenous List:

To learn more about The Indigenous List, please visit: https://illuminatives.org/the-future-is-indigenous/

IllumiNative is a Native woman-led racial and social justice organization dedicated to increasing the visibility of—and challenging the narrative about—Native peoples. Our mission is to build power for Native peoples by amplifying contemporary Native voices, stories, and issues to advance justice, equity, and self-determination. We envision a future where the self-determination and sovereignty of Native peoples is respected and supported; where our children see themselves reflected in the world around them; and where Native peoples author and drive our own narrative.

The Black List, an annual survey of Hollywood executives’ favorite unproduced screenplays, was founded in 2005. Since then, at least 440 Black List scripts have been produced, grossing over $30 billion in box office worldwide. Black List movies have won 54 Academy Awards from 267 nominations, including four of the last twelve Best Picture Oscars and eleven of the last 28 Best Screenplay Oscars.

In October of 2012, the Black List launched a unique online community where screenwriters make their work available to readers, buyers and employers. Since its inception, it has hosted nearly 80,000 screenplays and teleplays and provided more than 130,000 script evaluations. As a direct result of introductions made on the Black List, dozens of writers have found representation at major talent agencies and management companies, as well as sold or optioned their screenplays. Several films have been produced from scripts showcased on the website including Golden Globe nominated NIGHTINGALE, starring David Oyelowo.

Currently, the Black List hosts over 5,000 scripts by approximately 3,700 writer members. These scripts are available for download by industry professionals ranging from agency assistants, to studio and network presidents, to A-list actors and directors.