“Let Go and Be Bold”: Director/Editor Teams on “Rewriting” Their Films During the Edit 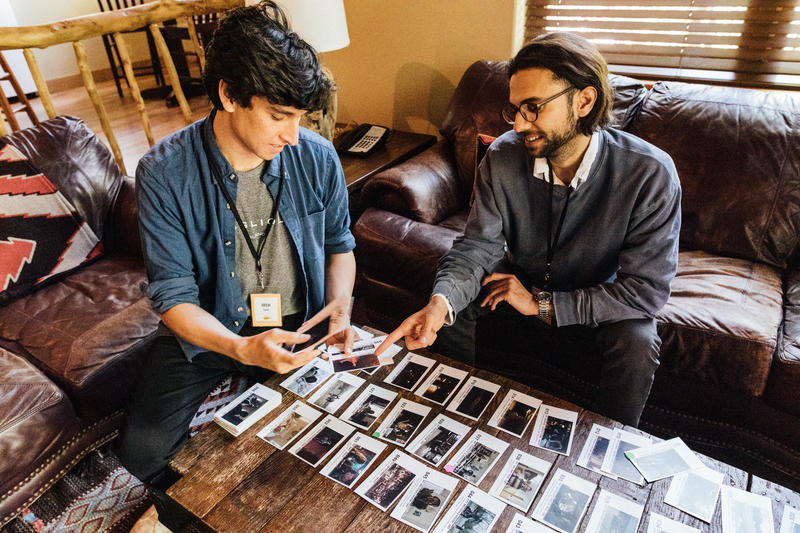 As the summer winds down, we’re spotlighting the Feature Film Program’s post-production support through the annual Sally Menke Memorial Editing Fellowship and the Editing Residency, which took place this past June during our annual Directors Lab.

She is the vice president of Los Angeles for Blue Collar Post Collective, a grassroots nonprofit organization that supports emerging talent in post-production. Mónica will receive a yearlong mentorship from editor Maryann Brandon and an associate membership with American Cinema Editors.

The weeklong editing residency supported two director/editor teams. Writer/director Kerem Sanga and editor Joshua Raymond Lee worked on their feature The Violent Heart, a romantic drama about the reverberations of a violent act outside Nashville. Dominican Republic–based writer/director Andrés Farías and editor Juanjo Cid came to the residency with their feature debut Candela, based on Rey Andujar’s novel about the intertwining lives of three Santo Domingo strangers.

The two teams worked on their picture edits with guidance from dedicated editing mentor Suzy Elmiger (Master of None, Little Accidents, Big Night) and other creative advisors at the lab, including editors Dylan Tichenor and Pamela Martin.

We sat down to chat with these artists about their experience this summer.

Describe where you were in the post process when you arrived at the residency.

Kerem: We were in an ideal place, about 12 weeks into the cut. I’d had enough time to review all of the dailies and do my pass through the film with the editor, but it was early enough that we were still open to changing the film dramatically.

Andrés: Before we went to the lab we thought we were almost finished with the picture edit, but from day one of the residency, we realized that we had a lot of work ahead.

What did you discover during the Directors Lab? Did anything surprise you?

Mónica: This is going to sound weird, but I learned the importance of being connected to the Earth and your surroundings in order to stay fresh and creative. That mountain [Sundance Mountain Resort] has magic. It reminds you why you love doing this and makes you want to keep going. I also learned how much I enjoy getting to know the crew that is working hard to give me all the pretty images I get to play with.

Andrés: Editing is the third time that a film is written—the first one is in the actual process of writing the script, and the second one is in the shooting. What surprised me the most was to actually experience how much a film can change for the better just by thinking out of the box and trying new paths.

Editing is the third time that a film is written—the first one is in the actual process of writing the script, and the second one is in the shooting.

Kerem: Our film has a lot of story threads that could be arranged in a number of ways. The editing residency taught us which threads were most important. I was surprised by how much the change of scenery and being in the mountains affected my mood and willingness to experiment.

Josh: After our initial screening, we received a lot of deep and diverse feedback from our advisor, Suzy Elmiger, as well as the other Sundance Institute mentors. This emboldened us to take some big experimental swings that might have been inconceivable had we remained back in our New York cutting room. We found ourselves developing new work methods, like making major changes to the plot and then playing the film at four-times speed to see if we could follow the new narrative structure, or screening the film silently in the theater and discussing it with Suzy as it played. It’s hard to overstate how completely transformational the work we did in one short week was for the film.

Juanjo: It was very interesting to see how people from a completely different culture reacted and read the film, especially things that are such an inherent part of our Dominican lives.

To the editors: How do you strike the balance between serving the director’s vision and infusing your own creative decisions—or are they one and the same?

Mónica: Editors are there to help the director’s vision come to life, but if you don’t have an opinion and only execute other people’s ideas, why are you there? Working together can only make a film stronger. That being said, knowing when to push for an idea and when not to is extremely important. Read the room.

Editors are there to help the director’s vision come to life, but if you don’t have an opinion and only execute other people’s ideas, why are you there?

Josh: The editorial process is a continuous conversation. As the editor, you provide a unique perspective for the director by being able to respond directly to the footage without the burdens and stresses of the production process. I try to work closely with a director and cinematographer during pre-production. We speak about the script, locations, and others aspects of prep so that I can understand how the script and vision are being adapted to the realities and limitations of production. As an artist, you bring your own sensibility to a project, and this kind of early dialogue allows you to provide the most robust possible foundation for post-production.

Juanjo: The editor’s job is not to make any creative decisions but to offer creative options guided by the director’s intent and whatever the material has to offer.

What’s one takeaway from the lab that you would share with an aspiring editor?

Josh: The importance of changing one’s perspective during the editing process. Sundance Institute provides a unique opportunity to make bold experimental moves in an environment shaped by creative mentorship. And while that’s obviously not always available, the techniques we observed (the openness to deep input from our more experienced mentors, screening for the other fellows and our editing residency peers, and the general spirit of total freedom and experimentation) are things I plan to implement in all of my future projects.

Andrés: I think one of the coolest things about the residency is working in a completely different environment, disconnected from our daily routines. That change of perspective did great things for us.

What’s one takeaway from the lab that you would share with an aspiring director?

Mónica: Don’t be afraid to take risks. Go shoot short films. Experiment with your ideas that sound crazy; you need to know if you can pull them off. It’s all about finding your voice. In an industry that is pushing for sequels and remakes, it takes courage to be original.

Don’t be afraid to take risks. … Experiment with your ideas that sound crazy; you need to know if you can pull them off.

Kerem: Let go and be bold. When anybody talks to you about your film, resist all temptation to explain yourself and just listen.

Andrés: Forget all the preconceived ideas you had before and during the shoot and be open to moving things around; try new paths and shake things up. You have to trust the process and your gut.