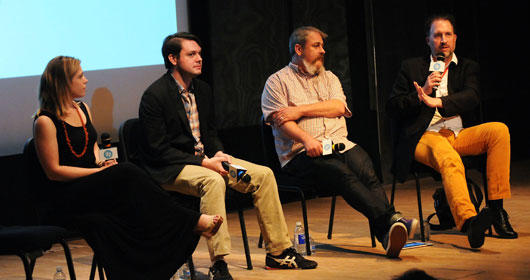 Few people go into the business of making films because of a passion for file conversions or frame rate quandaries. But the truth is that every filmmaker who wants his or her film to be seen, screened, distributed, or streamed needs to contend with these and other issues pertaining to the swiftly changing world of digital deliverables. Gone are the days when reels of 35mm film were all you needed to show your film; now you need to juggle between ProRes files, HDCAMs, and DCPs—and that’s just for starters. Yet solving for these matters can go a ways toward determining how easily and widely your film can make its way into the world.

As part of the #ArtistServices Workshop at IFP Week in New York, attendees took a crash-course in post-production dissemination from four professionals who work at different stages of the process at a panel cheekily but accurately entitled, “Everything You Wanted to Know About Digital Deliverables (But Were Afraid to Ask).” Jonathan Marlow, co-founder of online exhibitor Fandor, tried to soften the impact of what was in store, saying, “We won’t be dry or technical.” Which prompted Emily Eddey, Senior Producer at post-production house Light Iron, to level with the audience at Lincoln Center’s Bruno Walter Auditorium. “This is going to be very dry and technical,” she said. It was certainly the latter, but the panelists also managed to be entertaining enough to help the medicine go down.

Eddey started things off with a slideshow presentation of how to prepare films for a life outside of your home hard drive. She itemized the most requested deliverables (from sound files to BluRay masters) for both festivals and online streaming services like iTunes and Netflix, and estimated costs at reputable post-production houses such as her own. She also noted how festivals increasingly prefer DCP over ProRes and HDCAM, and advised against sending encrypted files. “The chances of your DCP not playing at a festival because it’s locked and the key doesn’t work are far greater than some guy taking a DCP hard drive and plugging it into a computer and stealing it,” she said. “The goal is to play in as many festivals as possible, and I can’t tell you how many times I’ve been woken up at 2 a.m. for a festival going on in Holland, and the key’s not working and they’re missing a screening, and there goes 500 viewers. It’s just not worth it.”

She also advised to budget for these post-production matters in the pre-production phase of your project, which was also echoed by Paul O’Neil of Premiere Digital, who helps disseminate films via the distribution portal Quiver. Beyond budgeting funds toward preparing deliverables, O’Neil said that you should set aside three months for the process. “It’s not a month-long process. Even though your movie is made and is sitting there, it’s going to make more money if you allot three months to the process,” he said. “If you’re trying to release your movie a month from today, I guarantee you’re going to have a headache and hate your distribution partner.” O’Neil walked attendees through a checklist of assets required for the major digital platforms, including a trailer, closed captioning, chapters, metadata, audio, subtitles and bonus content. As for what to submit to Quiver for getting things in order, “we want exactly what you shot in,” he said. “If your film was shot in 5.1, send us the 5.1. Let us do the conversion, so that if we mess it up we can go back and redo it without having to bug you about it.” He also talked about the need to submit art that’s clear of credits, pricing, and festival laurels, which are rejected by outlets such as iTunes who present films on smaller devices where legibility can be a challenge. “Do these minimal things for art, because if you want your feature to be promoted like every other studio feature, you need this stuff,” he said. “Make it look like the big boys.”

At the other end of the spectrum, Marlow talked about how Fandor takes a very different approach to digital distribution, accepting whatever format is most readily available—including even VHS—and absorbing the costs of transferring and disseminating. “We work with everything,” he said. “We’ll put up films that every other service has rejected, and sometimes for good reason,” yet it creates a platform for hard-to-see films and financially challenged filmmakers. “If you can do all of the things that have been said you should do it. These folks are professionals, you should definitely talk to them,” Marlow said. “And then when you realize you have no money you should talk to me.”