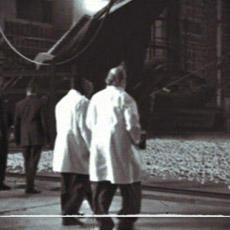 Super 8 is a film written and directed by J.J. Abrams and produced by Steven Spielberg.  The Bad Robot and Amblin Entertainment production was released by Paramount Pictures in the U.S. on June 10, 2011 and was the #1 grossing movie at the box office that weekend.  Project C was hired by Paramount Pictures to help craft the interactive portion of the marketing campaign.

While the film was made by two of the biggest names in the business, some elements of the Super 8 campaign took on a very independently minded approach.

Elements of the Super 8 campaign took on a very independently minded approach.

Do Not Speak Of This…

If you’ve ever seen J.J. Abrams’ TED keynote, then you know all about his affinity for mystery. The interactive campaign for Super 8 was going to be no exception.  Typically when marketing a summer movie of this kind, we have access to endless assets in order to craft a visually robust campaign.  Not in this case.  We knew from the get go that we may not have anything to work with at all in terms of tangible film materials. Yet the primary goals were the same: generate awareness, expand the demographic, be innovative and garner press. It’s hardly ever easy, even when we do have a huge war chest of assets to work with – but that’s what makes it so fun.

With the support of the team at Paramount Pictures, Bad Robot and Amblin, the gloves were off. Overt was out and covert was in.

We produced an abbreviated site (http://www.super8-movie.com) that featured the key art look of the film along with requisite film information such as trailers, tv spots, images, synopsis, cast information and so on. Even without all the bells and whistles, a web destination with a trailer and basic film info is essential for any marketing effort – regardless of budget and other resources.

For us, where things got really interesting, is when we decided to invite the audience to participate.  Leveraging user enthusiasm via engagement sets up boundless possibilities.

The campaign kicked into gear about 180 days ahead of the film’s release with the premiere of the first theatrical trailer worldwide.  At the end of this trailer, there was a very brief flash of a film leader that had 5 words written on it in grease pencil: SCARIEST, THING, I, EVER, SAW.  One could only see this by freeze framing the video, but it didn’t take long before this was all over the Internet.

If you punched the address, you discovered some sort of a remote terminal for a PDP-11 computer circa 1981.  By following along at this URL, you uncovered a series of print outs that contained thematic clues in line with the film’s plot.  For example, one was an old newspaper ad for ‘Rocket Poppeteers’.  If you look closely, there are two handwritten X’s on each page.  If you rotate the first page 180 degrees and line up the X’s, a secret message is revealed.

This was very quickly deciphered and shared by fans online. This created early buzz, fueled speculation about the plot and firmly rooted the film in its time period.

Several other items were available for discovery along the way including audio clips and scientist IDs from inside a secret military base.

Scariestthingieversaw.com continued throughout the campaign and concluded its storyline the week of release.  It gave viewers a peek into the mind of a scientist who had witnessed Top Secret things inside of this military base and thematically tied in to other digital initiatives.

The real backbone of the campaign was a 3-minute web exclusive clip.  This clip existed in the ‘Editing Room’ described below and started out visible to the public with only a few frames filled in, while the rest of it simply read ‘Clip Missing’.

Visitors to the site could track the progress of the clip as it was slowly revealed over the course of the campaign.  By engaging the various interactive features described below, users were able to participate and help uncover the mysteries of this clip.

The Super 8 Editing Room featured a series of film-strips released one at a time.  Each strip represented a grouping of frames that slowly unlocked the 3 minute clip and ended up consisting of over 100 unique strips of film.

The first wave was sent to the press as mysterious packages that included a specific strip of actual Super 8 film.  This strip of film corresponded to 1 second of footage from the 3-minute clip.  It was accompanied with a one-of-a-kind card that revealed a special code.  By sending this code back to us, it unlocked 1 more second of footage on the site.

As these film-strips were discovered, they showed up on the official site in a virtual carousel.  One could browse these strips as well as watch however much of the clip was revealed at that particular time.

As a companion to the Super 8 Editing Room, the audience was encouraged to participate in helping unlock the exclusive web clip by logging in at predetermined times in the weeks leading up to release. By doing so, they had the chance to claim their own exclusive frame as well as win a limited edition t-shirt, and also a one-of-a-kind print of the frame that they revealed.

There was such enthusiasm surrounding this feature that users worked together to unlock some clips in a matter of seconds.

Admittedly, we had great resources at our disposal to make all of this happen. But the basics of our approach can be applied to a project with a much more modest budget and scale. Our single concept of allowing users to pre-discover some basic plot and style elements of the film led to us to three game-like executions, each one more interactive than the one before. With each opportunity to engage with the Super 8 story in a more meaningful way, our audience became more invested in seeing the film itself and word of mouth grew exponentially.

Per usual, we also created a companion site for mobile devices.  The folks at Paramount thought it would be fun to offer iPad users something special and we agreed it was a great idea.

If you visited the Editing Room site on your iPad, you had the unique opportunity to unlock certain clips a week early.  You could do this by experimenting with the knobs on a Super 8 projector.

Another unique way to participate was via an iPhone App produced by QMx, Bad Robot and Paramount Digital that allowed you to take videos, edit, and apply effects that made it look like a Super 8 film.  By doing so, random frames from the 3-minute clip would appear within your films.

The culmination of these features resulted in the last portion of footage being revealed as a Yahoo! front page exclusive the day of release.

This completed the 3 -minute clips, which, in the end, turned out to be the extended view of a Super 8 reel discovered by the kids in the movie. It was shot in the infamous military base by the United States Air Force on April 8, 1963 and was essentially a prequel to the events which unfolded in the film.

Super 8 opened far above expectations and had a stellar performance as an original story in a summer movie slate filled with sequels, reboots and superheroes.  It has grossed over 177 million to date worldwide and is still going.

The online campaign no doubt played a part in a larger effort to build awareness and excitement around this film, as well as created an avenue for great word of mouth.  It was an honor to work on this campaign because Paramount Pictures, Bad Robot and Amblin Entertainment used the interactive space as the tip of the spear – which believe it or not – is not very common.

When crafting a virally focused campaign such as this, there is always the inherent challenge to reach a wide audience.  The notion that something is ‘too nerdy’ or ‘just to please the fan boys’ is something we always have to be cognizant of.  Our attitude is that if something is interesting enough and it delivers tangible content… this does not matter.  It will find its audience and its audience will find it.  Sometimes, it reaches beyond this.  You just never know.

When a filmmaker puts forth the effort to arm the campaign with real content directly related to the film itself, it respects the audience and puts the campaign in a great position to succeed.

Super 8 was one of the most challenging and rewarding campaigns that we have been a part of to date.  The virtual carousel that we built was so technically difficult that during the campaign we often joked internally that it would have been easier had we rented out some dingy warehouse space and built it practically.  We could set up a web cam and allow users to see it and move it real time in the real world.