An Army of Volunteers 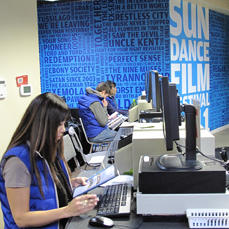 You may be aware that the Sundance Film Festival couldn’t operate without the army of volunteers who make it possible to produce the Festival every year. Anyone who’s been uncertain about which shuttle bus to board, which line to stand in at a Festival venue, or attended a Festival screening has been helped by a Festival volunteer.

The fact that the Festival enjoys a 70% return rate among its volunteers is no small benefit. “We just make sure they have a good time,” Aagaard says. The Festival hosted a volunteer appreciation party on Wednesday night and gives its volunteers easy access to Festival venues and many opportunities to attend screenings for free. But “the camaraderie is really something that creates the experience” of being a Festival volunteer, says Aagaard, who grew up in Salt Lake City and was a Festival volunteer (a transportation liaison, to be precise) before she started working for Sundance Institute.

“The Festival is about telling stories but its not just the story you see on the screen,” says Amanda Singer, a Festival volunteer who recently retired as the chief of staff of the Utah Department of Human Services. “It’s about the people who come together and create this community. Even if it’s just standing in line, you meet the most interesting people. People tell their stories and you develop this relationship with people … that is just kind of remarkable.”

This is Singer’s third year volunteering at the Festival, and she’s assigned to the Temple Theatre for the third year in a row. Her first year volunteering with the Festival, she and the rest of the volunteers at the Temple decided to welcome people to the venue as they arrived. “We said, ‘We’re so glad you’re here!’ And people said, ‘You are?’ I think people were taken back by the welcoming the volunteers did. You could do something mundane and people were so appreciative; you could improve their experience of the Festival in so many ways with simple civility.”

This is Aagaard’s third year managing the Festival’s volunteers, but a moment from her first festival still stays with her. It was the night before most Festival volunteers arrived, and she was busy working, checking off the little details that needed to be accomplished so that all the volunteers knew where they were supposed to be. She left the office to pick up dinner. “I saw all these volunteers at this table, and I saw more and more come in and it was like a reunion,” she recalls. “They hadn’t seen each other in a year. They were each other’s Festival family and to see them begin again that friendship, it was something I hadn’t appreciated until that moment.”

Every year the Festival honors exceptional service as a volunteer with the Gayle Stevens Award. On Wednesday night before the 2011 Festival kicked off, Jeff Aguirre was announced this year’s winner. Aguirre is the manager of the Eccles Theatre during the Festival, and has been a volunteer for Sundance for an astounding 21 years.