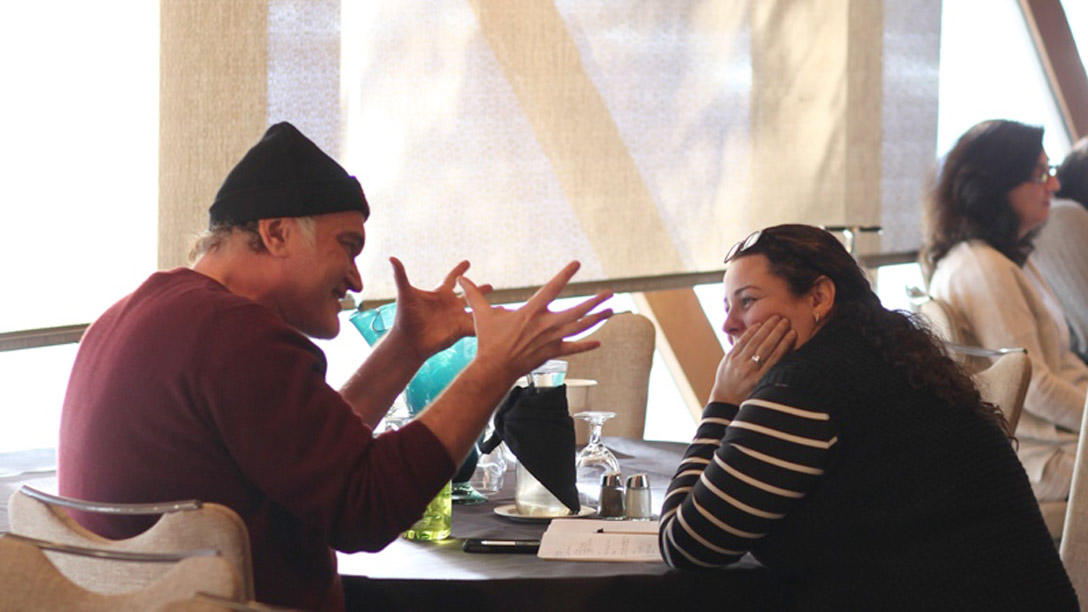 Los Angeles, CA — Sundance Institute announced today the 12 projects selected for the 2015 January Screenwriters Lab, an immersive, five-day writers’ workshop at the Sundance Resort in Utah taking place January 16 – 21. The Lab is one of the 24 residency programs the Institute hosts year-round, in addition to granting more than $2.5 million to independent artists each year.

Participating independent screenwriters – drawn from around the world, including the United States, Latin America, Europe, China, and the Middle East – will have the opportunity to work intensively on their feature film scripts with the support of established writers in an environment that encourages innovation and creative risk-taking. The fellows will work with a distinguished group of Creative Advisors at the Lab, led by Artistic Director Scott Frank, and including Naomi Foner, Rodrigo Garcia, Michael Goldenberg, John Lee Hancock, Erik Jendresen, Kasi Lemmons, Walter Mosley, Marti Noxon, Howard Rodman, Susan Shilliday, Zach Sklar, Elena Soarez, Peter Straughan, Joan Tewkesbury, and Audrey Wells.

Michelle Satter, Founding Director of the Sundance Institute Feature Film Program, said, “Together with my colleague, Labs Director Ilyse McKimmie, we are honored to welcome our new group of fellows to the January Screenwriters Lab. They represent a broad spectrum of independent vision with stories that reflect our complex world with emotional truth and urgency. The Lab is the beginning of our year-round support for these filmmakers.  We look forward to working with them throughout the life cycle of the project.”

The projects and fellows selected for the 2015 January Screenwriters Lab are:

Archive (USA) / Jonathan Minard (Co-writer/Director) and Scott Rashap (Co-writer)
In the wake of a virtual affair lived entirely through email and gchat, two lovers face the intangibility and distance that characterized their relationship. A search for the physical traces of their connection prompts a journey to the data center which holds their intimate messages. This project is the recipient of the Alfred P. Sloan Fellowship.

Jonathan Minard’s films examine our dreams of the near future through documentary and science fiction. He has directed a web series on the history of the internet called The Information Age, and created Clouds, an interactive movie presented in virtual reality which premiered as part of New Frontier at the Sundance Film Festival in 2014, and was awarded Best Interactive Film at the Tribeca Film Festival. Minard has received support through research fellowships and commissions from Eyebeam, the Studio for Creative Inquiry, NASA Ames, and the US Fulbright Program in Mongolia. In 2009, he founded Deepspeed Media, a production company with a focus on science and technology.

Scott Rashap is a screenwriter and director of live action and animation. Since graduating from NYU’s Tisch School of the Arts, he has written a series of historical and biographical films told through a nontraditional lens, including Toru, the story of a terminally ill baby who lives out his brief life in a simulation; Songs from a Room, a study of a dead man’s identity based on the items found in his office; The Epic History of Everyday Things for the History Channel; and Past Perfect, an interactive documentary directed with Jonathan Minard, which invited participants to back up their memories to the Cloud.

Eliza Hittman is an award-winning filmmaker, born and based in Brooklyn. Her debut feature film It Felt Like Love premiered at the Sundance Film Festival in NEXT <=> and the International Film Festival Rotterdam in the Tiger Competition in 2013. It was released in the US by Variance and was a New York Times, Village Voice, and Los Angeles Times Critics’ Pick. She was recently named one of Filmmaker Magazine’s 25 New Faces of Independent Film. Hittman was nominated for a Bingham Ray Breakthrough Director Gotham Award (2014) and for two Independent Spirit Awards (2015).

Beretta (Qatar) / Sophia Al-Maria, (Writer/Director)
Barraged by daily harassment from men on the streets of Cairo, a mute young woman is finally pushed over the edge when she is attacked and raped by a stranger. Transforming from victim to vigilante, her feelings of powerlessness and rage echo the complex dynamics unfolding in the Arab world today.

Sophia Al-Maria is a Qatari-American artist and writer based in London. Her memoir, The Girl Who Fell to Earth, was published in 2012 by Harper Collins and has been translated into Arabic. Her video work has been shown in galleries, biennales and museums all over the world from New Zealand to South Korea to the United Arab Emirates. She has been interviewed about her work on Gulf Futurism in Vice Magazine, Dazed and Confused and TANK.

Eggplant (China/Canada) / Yung Chang (Writer/Director)
A wedding photographer and his girlfriend drift across the country on the run from their pasts, when they encounter a young grifter who irrevocably changes the course of their lives. Eggplant follows three Chinese millennials who strive for a better, more meaningful existence in a society fixated on money, materialism and duty.

First Match (U.S.A.) / Olivia Newman (Writer/Director)
Hardened by years in foster care, a teenage girl from Brooklyn’s Brownsville neighborhood decides that joining the all-boys high school wrestling team is the only way back to her estranged father.

Olivia Newman is a writer/director from Hoboken, NJ. Her short film, First Match, premiered at the New York Film Festival, won Best Student film at the Aspen Shortsfest, and is currently airing nationally on PBS and internationally on ShortsHD. Newman was one of ten filmmakers selected for the 2012 IFP/Film Society of Lincoln Center Emerging Visions program and the 2014 Cine Qua Non Screenwriting Lab. She received her MFA in film from Columbia University and her BA in women’s studies and French from Vassar College.

Tramontane (Lebanon) / Vatche Boulghourjian (Writer/Director)
Rabih, a young blind man, travels across rural Lebanon in search of a record of his own birth after discovering that his identity card is a forgery. He gradually descends into a Kafkaesque encounter with a nation unable to retell his—or its own—narrative.

Vatche Boulghourjian is a Lebanese filmmaker with an MFA from NYU’s Graduate Film Program. Before attending NYU, Boulghourjian worked for several years throughout the Middle East on documentaries for television networks while also making independent shorts, experimental films, and his own documentaries. Fifth Column, his thesis film at NYU, received a production grant from the Hollywood Foreign Press Association and premiered at the 2010 Cannes Film Festival as part of the Cinefondation program.

I Was a Simple Man (U.S.A.) / Christopher Makoto Yogi (Writer/Director)
Like marionettes on a toy stage, the ghosts of Seiichi’s past haunt the countryside in this tale of a Hawai’i family facing the imminent death of their eldest.

Christopher Makoto Yogi was born in Hawai’i and raised on the ocean. Working in both fiction and documentary, his recent films Obake, Layover, on the Shore, and Makoto: Or, Honesty, have screened across the country and worldwide. He is a graduate of the USC MFA film program and currently resides in New York, where he is developing two features and a documentary, all of which explore his beautifully complex island home.

Little Woods (U.S.A.) / Nia DaCosta (Writer/Director)
While trying to make a life for herself in an oil town in North Dakota, Deb finds out she must undergo a medical procedure she can’t afford. With no other option, she turns to her childhood friend, Ollie, to help her illegally cross into Canada, jeopardizing her job, her son, and both of their lives.

Nia DaCosta is a writer/director based in New York City. She has written and directed projects for stage, film and new media platforms including the playlet Kingdom Come at the Leicester Square Theatre in London, the game show Sagmeister v Walsh for Adobe (Behance), and the documentary Shark Loves the Amazon.

Mustang (France) / Laure de Clermont-Tonnerre (Writer/Director)
Roman Coleman is halfway through an 11-year sentence for attempted murder when he is offered the chance to participate in a rehabilitation program that trains inmates to break captured wild mustangs. Based on a real-life program, Mustang is a portrait of one man’s unique connection to these wild animals that forces him to confront his past.

Mark F. Kindred grew up as an immigrant in the projects of Boston. He earned his bachelor degree in philosophy at Harvard University and has lived and traveled all over the world. He is currently a graduate thesis student at the NYU Tisch School of the Arts, where he is the recipient of the Williard T.C. Johnson Fellowship and the 2014 Faculty Commendation Award. His short film America premiered at the SXSW Film Festival.

Untitled Loveless Fable (U.S.A.) / Brent Green (Co-writer/Director) and Michael McGinley (Co-Writer)
A young boy living on a farm begins inventing strange, hand-made machines to ease the family’s hard labor, but his ambitions quickly grow. When his most daring invention backfires and changes life on Earth forever, the townspeople struggle to understand whether he has done them harm or shown them what they have been missing.

Working in the hills of rural Pennsylvania, Brent Green is a self-taught filmmaker, storyteller, and visual artist whose films have screened, often with live musical accompaniment, at the Rotterdam Film Festival, the Sundance Film Festival, the San Francisco Film Society, MoMA, The J. Paul Getty Museum, The Walker Art Center, The Hammer Museum, as well as at warehouses, galleries, and rooftops across the globe. He serves on the board of Rooftop Films, is a 2005 Creative Capital grantee, and the recipient of 2014 MAPfund grant. Green’s work is in permanent collections including the Progressive Collection, the Hammer Museum and MoMA.

Michael McGinley is a musician and painter from Chicago. He has performed with members of Fugazi, Dirty Three, and Califone. His work has been featured in the Chicago Reader, Doris, and Dead or Dying.

What They Had (U.S.A.) / Elizabeth Chomko (Writer/Director)
When her mother, suffering from Alzheimer’s, wanders into a blizzard on Christmas Eve, Bridget Ertz flies back to her hometown. Through stepping into her past, she finally realizes what’s missing in her present.

Elizabeth Chomko is a writer, director and actress whose plays have been part of The Kennedy Center’s New Plays Festival, Inkwell Theatre LAB, and The Blank Theatre’s Living Room Series. She recently wrote and directed a short film, Adoptation, and has appeared as an actress in numerous films, television series, and in theaters across the country and in London.