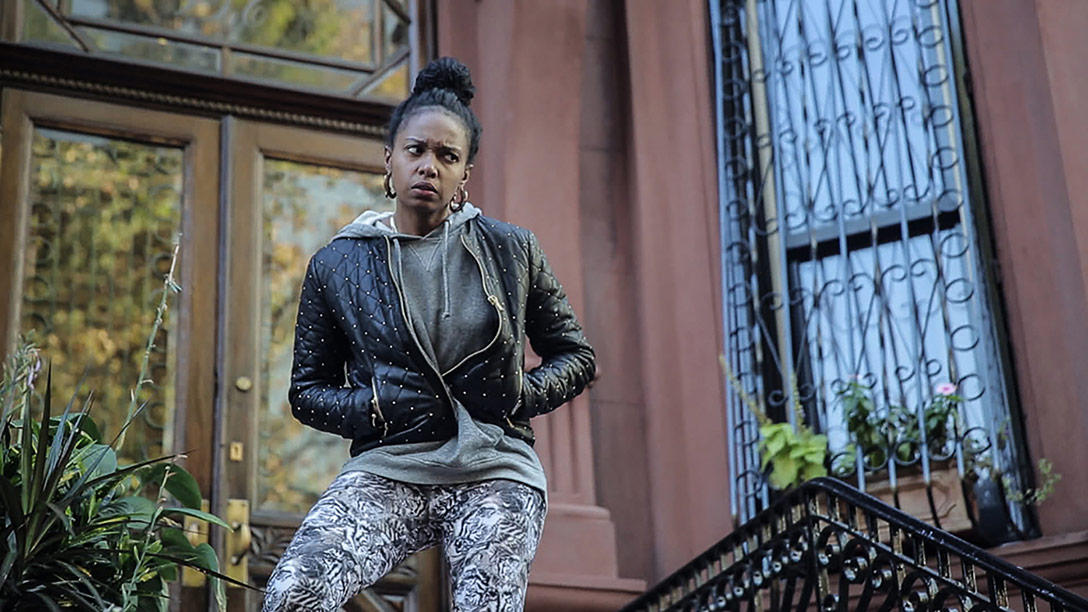 Park City, UT — Sundance Institute announced today the program of short films selected to screen at the 2015 Sundance Film Festival, January 22 to February 1 in Park City, Salt Lake City, Ogden and Sundance, Utah. The 2015 Short Film program is comprised of 60 short films selected from 8,061 submissions. The Festival is the centerpiece of the year-round public programs for the Institute, which also hosts 24 residency labs and grants more than $2.5 million to independent artists each year.

Mike Plante, Senior Programmer for the Sundance Film Festival, said, “This year’s short filmmakers have broken through their limited timeframe with a high level of artistry and story that will resonate with audiences long after each film has ended.”

Sundance Institute and the Festival have long supported the creation and exhibition of short films. A record 8,161 short films were submitted for consideration for the 2014 Sundance Film Festival. Notable Institute alumni who started their careers with short films include Wes Anderson, Todd Haynes, Spike Jonze, Debra Granik, Paul Thomas Anderson, David O. Russell, Trey Parker and Matt Stone, Tamara Jenkins and Jason Reitman. In addition to the short film program at the Festival, the Institute also hosts daylong workshops for short filmmakers and a program of short films that screens in theaters across the country.

Actresses / U.S.A. (Director and screenwriter: Jeremy Hersh) — The film follows the relationship between a young, aspiring actress and an established off-Broadway star.

A.D. 1363, The End of Chivalry / U.S.A., New Zealand (Director and screenwriter: Jake Mahaffy) — A little-known historical catastrophe leads to the definitive end of the era of chivalry and questing.

Dog Bowl / U.S.A. (Director and screenwriter: Gordy Hoffman) — A heartbroken girl spiraling through life stumbles upon the true nature of her existence after stealing the vest off of a service dog.

A Million Miles Away / U.S.A. (Director and screenwriter: Jennifer Reeder) — Melancholy as survival strategy: A woman on the edge of failing and a pack of teenage girls simultaneously experience a supernatural coming-of-age. The transformation unravels to the infectious beat of a heavy metal anthem rearranged as a lamentation.

Myrna the Monster / U.S.A. (Director and screenwriter: Ian Samuels) — A heartbroken alien dreamer from the moon transitions into young adult life in Los Angeles just like any other 20-something.

Rabbit / France, U.S.A. (Director: Laure de Clermont-Tonnerre, Screenwriters: Laure De Clermont-Tonnerre, Brady Corbet, Mona Fastvold) — A therapist working in tandem with a correctional facility’s Pet Partnership Program entrusts a small rabbit to a female prisoner. In the confinement of her cell, will the inmate be able to transcend her circumstances and connect with the animal?

SMILF / U.S.A. (Director and screenwriter: Frankie Shaw) — A young single mother struggles to balance her old life of freedom with her new one as mom. It all comes to a head during one particular nap-time when Bridgette invites an old friend over for a visit.

Stop / U.S.A. (Director and screenwriter: Reinaldo Marcus Green) — A young man’s livelihood is put to the test when he is stopped by the police on his way home.

Superior / U.S.A. (Director and screenwriter: Erin Vassilopoulos) — A stranger passing through town sparks a teenage girl’s desire to distinguish herself from her identical twin sister. As one sister struggles to break free, the other insists on preserving their distinctive bond.

Back Alley / France (Director and screenwriter: Cécile Ducrocq) — Suzanne, a prostitute for 15 years, has her turf, her regular johns, and her freedom. One day, however, young African prostitutes settle nearby, and she is threatened.

The Chicken / Germany, Croatia (Director and screenwriter: Una Gunjak) — The day-to-day life of a six-year-old girl growing up during unstable times in Sarajevo is shaken up when a chicken joins her family.

Followers / United Kingdom, Australia(Director and screenwriter: Tim Marshall) — Lynn, an elderly woman stricken with grief after her husband’s death, finds solace in an apparition of Jesus on the swimming trunks of a young gay man at her adult swimming class.

Greenland / Israel (Director and screenwriter: Oren Gerner) — Oren packs his belongings at his parents’ house before moving in with his girlfriend. Through seemingly simple interactions, family dynamics are revealed. The house constitutes the space in which past, present, and future mix into a chronicle of separation.

Hole / Canada (Director and screenwriter: Martin Edralin) — A daring portrait of a disabled man yearning for intimacy in a world that would rather ignore him.

I AM HONG KONG / China (Director and screenwriter: Flora Lau) — The Umbrella Movement shows how citizens’ passion for a more just future brings about a peaceful but powerful social movement, in the midst of defamation and attacks. This film documents what Hong Kong means to the interviewees, without any political intention.

Northern Great Mountain / Sweden (Director and screenwriter: Amanda Kernell) — Elle, 78, doesn’t like Sámi people — even though she is Sámi. Pressured by her son, she returns north for her sister’s funeral. When she realizes he’s planned for them to stay with their relatives, Elle checks into a hotel.

Out of Sight / United Kingdom (Director: Nick Rowland, Screenwriter: Joe Murtagh) — To clear a debt with a loan shark, Martin, a recoverimg drug addict, agrees to lock a stranger in his spare room while they go cold turkey. As the days pass, Martin suspects something far worse is at play.

Take Me / Canada (Directors and screenwriters: Anaïs Barbeau-Lavalette, André Turpin) — A nurse working at a center for the disabled is confronted by his principles when he’s asked to accomplish a particular task.

VOLTA / Greece (Director and screenwriter: Stella Kyriakopoulos) — As a mother and daughter start out from downtown Athens and head to the northern suburbs, little Nina thinks they’re simply going for a walk.

The 414s: The Original Teenage Hackers / U.S.A. (Director: Michael T. Vollmann) — In 1983, a group of Milwaukee teenagers gained notoriety when they broke into dozens of high-profile computer systems. The ensuing media frenzy terrified a nation previously ignorant of the capabilities of computer interconnectivity.

The Collectors: Beekeeper / U.S.A. (Director: Steven Cantor) — Dennis van Engelsdorp, former state apiarist for Pennsylvania and current entomology professor at the University of Maryland, is worried that bees — a crucial part of humanity’s ecosystem — are dying.

Every Day / U.S.A. (Director: Gabe Spitzer) — At 86, Joy Johnson was the oldest woman to run the 2013 New York City Marathon. The story of an inspiring athlete with an uncommon passion for her sport, and for life.

Hotel 22 / U.S.A. (Director: Elizabeth Lo) — Each night in Silicon Valley, the Line 22 public bus transforms into an unofficial shelter for the homeless. This film captures one dramatic night on the “Hotel 22” bus.

It’s Me, Hilary: The Man Who Drew Eloise / U.S.A. (Director: Matt Wolf) — This portrait of Hilary Knight, the artist behind the iconic Eloise books, sees him reflecting on his life as an illustrator and his relationship to his most successful work.

Making it in America / U.S.A. (Director: Joris Debeij) — A Salvadoran immigrant who fled to the United States as a teenager is now a single mother striving to build a future for her family in Los Angeles.

{THE AND} Marcela & Rock / U.S.A. (Director: Topaz Adizes) — Exploring the intimate spaces of modern-day relationships, {THE AND} is the best couples therapy session you’ll ever witness.

Object / Poland (Director: Paulina Skibińska) — A creative image of an underwater search in the dimensions of two worlds — ice desert and under water — told from the point of view of the rescue team, of the diver, and of the ordinary people waiting on the shore.

Papa Machete / U.S.A. (Director: Jonathan David Kane) — Two hundred years ago, Haitian slaves defeated Napoleon’s armies with the same tool used to work the land: the machete. Papa Machete explores a martial art evolved from this victory through the practice of one of its few remaining masters.

Starting Point / Poland (Director: Michał Szcześniak) — Aneta rebelled at age 19 and wound up in prison for murder. Nine years later, her daily routine takes her from behind prison walls to a nursing home.

Beach Flags / France (Director and screenwriter: Sarah Saidan) — Vida, a young Iranian lifeguard, is determined to be the one to participate in an international competition in Australia. However, when Sareh, who is as fast and talented, joins the team, Vida faces an unexpected situation.

OM Rider / U.S.A.(Director and screenwriter: Takeshi Murata) — In a vast desert bathed in neon hues, a misfit werewolf tears full speed ahead over forbidding terrain while his hoary counterpart awaits.

Palm Rot / U.S.A. (Director and screenwriter: Ryan Gillis) — An old Florida fumigator discovers a mysterious crate in the Everglades that ruins his day.

The Sun Like a Big Dark Animal / U.S.A. (Directors: Christina Felisgrau, Ronnie Rivera, Screenwriters: Ronnie Rivera, Bernardo Britto) — A computer and a woman fall in love, only to be torn apart because of their inappropriate feelings for each other.

Symphony no. 42 / Hungary (Director and screenwriter: Réka Bucsi) — The film applies an unconventional narrative. It presents a subjective world through 47 scenes. Small events, interlaced by associations, express the irrational coherence of our surroundings. The surreal situations are based on the interactions of humans and nature.

teeth / United Kingdom, U.S.A., Hungary (Directors and screenwriters: Daniel Gray, Tom Brown) — Things of worth are often neglected in favor of that which is more immediately gratifying. Unfortunately, things that are neglected are often lost forever. In teeth, a misguided and intensely focused man’s life is chronicled through his oral obsessions.

Tupilaq / Denmark (Director and screenwriter: Jakob Maqe) — The Tupilaq is both a symbol of the spirit of a forefather and a curse. This personal and moving short film revolves around the themes of cultural alienation, abuse, and the contrast between mythological Greenlandic nature and Western urban culture.

World of Tomorrow / U.S.A. (Director and screenwriter: Don Hertzfeldt) — A little girl is taken on a mind-bending tour of the distant future. 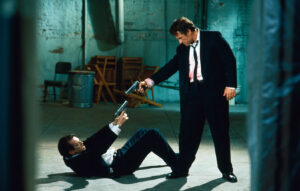 Steve Buscemi (on floor) and Harvey Keitel face off in “Reservoir Dogs.” By Vanessa Zimmer Thirty years have passed since Quentin Tarantino became an overnight