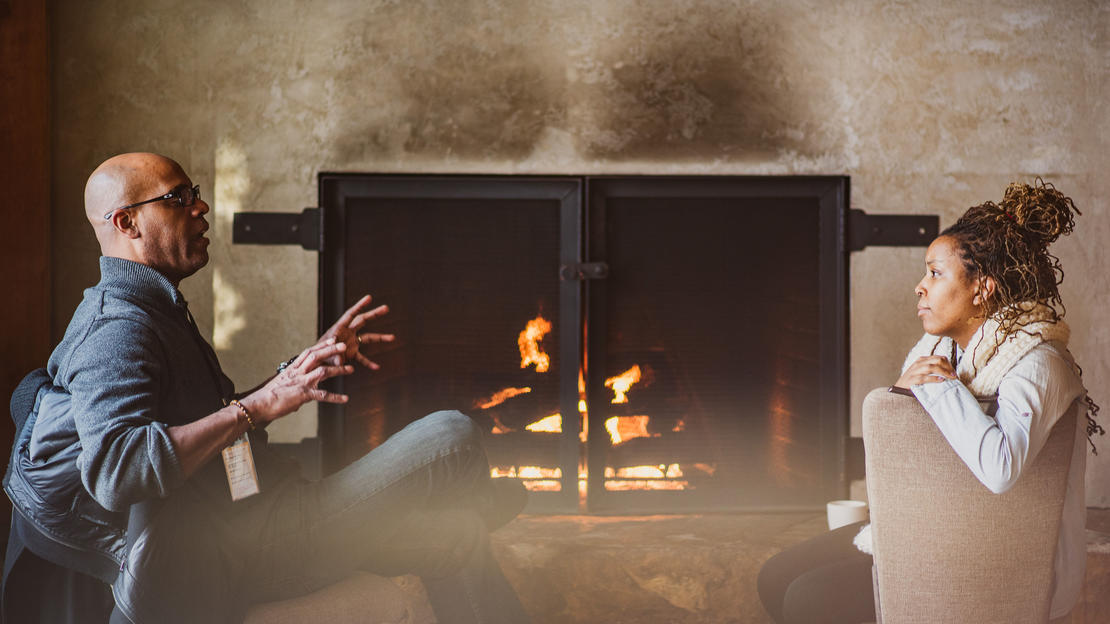 LOS ANGELES — Fifteen screenwriters will convene to advance their independent projects at Sundance Institute’s January Screenwriters Lab, taking place at the Sundance Mountain Resort in Utah from January 17–22, 2020. At the Lab, the screenwriters will immerse themselves in a rigorous and holistic creative process, working to further develop their scripts with the mentorship of accomplished creative advisors.

“We’re so excited to welcome this singular and bold group of artists to our January Screenwriters Lab,” said Satter. “Our program provides a safe and protected space for writers to be rigorous in their creative process as they develop new work that’s a true reflection of their unique voice and power as storytellers. Our Labs are the beginning of a long-term commitment to these writer/directors, who we will continue to advance with a robust, ongoing suite of customized support.”

The projects and fellows selected for the 2020 January Screenwriters Lab are:

A young father and his 11-year-old daughter have impossible expectations of themselves and each other on a week’s holiday at a resort in the Mediterranean, forcing them to confront the disconnect between who they are as a family and who they are apart.

Charlotte “Charlie” Wells is a Scottish filmmaker based in New York. Her first short film, Tuesday, was nominated for a London Critics’ Circle Award, two BAFTA Scotland New Talent Awards, and won special mention at the Glasgow Short Film Festival. Her second short film, Laps, won awards at the Sundance Film Festival and SXSW, screened online as a Vimeo Staff Pick Premiere, and was featured on Short of the Week, Topic, and Nowness. Wells’ most recent short, Blue Christmas, premiered at TIFF, screened at the Sundance Film Festival, and won awards at festivals in the US and UK. She is a graduate of the MBA/MFA dual-degree program at NYU and was featured in Filmmaker Magazine’s “25 Faces of Independent Film” 2018.

In this all-female reimagining of the Frankenstein story, a grieving maternity nurse and an obsessive morgue technician are unexpectedly bound together in a quest to successfully re-animate a deceased child.

Laura Moss is a filmmaker from New York City whose work has screened at MoMA, Tribeca, Rotterdam and SXSW. She was named one of Filmmaker Magazine’s “25 New Faces of Independent Film” in 2017 and her short film, Fry Day, which is currently available on the Criterion Channel, premiered at SXSW in 2017. Her latest project, the pilot of the sci-ﬁ/comedy series neurotica, starring Karen Gillan and Jon Bass, premiered at the 2019 Tribeca Film Festival and won Best Director for a Comedy Pilot at Seriesfest.

Brendan O’Brien is a writer and producer whose films have screened at SXSW, Rotterdam, Tribeca and Clermont-Ferrand. His work has been included in the London Review of Books and the Zombie Movie Encyclopedia.

Chalino tells the true story of Chalino Sanchez, the originator of the narcocorrido, who immigrated from Sinaloa to Los Angeles in the early 1990s and started a musical revolution with his songs about the lives of Mexican outlaws. Recipient of the Sundance Institute Latinx Fellowship.

Jesus Celaya is a Mexican American genre writer raised between the mountains of Washington State and the deserts of Sonora, Mexico. He finally settled in Los Angeles for film school, where he now resides. Celaya comes from a storytelling family born of a storytelling culture, marrying his love of history and folklore with his passion for cinema.

An Asian American teen raised in a volatile household wrestles with complex familial relationships while carving his own path toward independence and self-worth. Recipient of the Sundance Institute Asian American Fellowship, made possible in part by the A3 Foundation.

Bing Liu is a Chicago-based filmmaker best known for the Academy Award and Emmy-nominated documentary Minding the Gap, which premiered at the 2018 Sundance Film Festival and went on to win a Peabody Award. He directed three storylines on America To Me, a 10-hour series from Steve James that examines racial inequities in the U.S. education system. Liu is a 2017 Film Independent Fellow, a Garrett Scott Development Grant recipient, and graduated from the University of Illinois at Chicago. He is in post-production on his second feature documentary, following two young men and their mentors transforming lives in two Chicago neighborhoods affected by gun violence.

Two adolescent Navajo cousins from different worlds bond during a summer herding sheep on their grandmother’s ranch in Arizona, as they learn about their family’s past and themselves.

Luna Ramirez, a melodramatic Mexican teen, is Anthony Bourdain’s biggest fan, and she knows it is her destiny to become the next great culinary/travel documentarian extraordinaire! The only issue: Luna is undocumented, and her family doesn’t understand or support a career they see as fraught with risk. Recipient of the Sundance Institute | Comedy Central Comedy Fellowship.

Danya Jimenez is a Mexican American writer who learned English by repeating everything Lizzie McGuire said. Hannah McMechan was raised in a small tourist town beneath Yosemite National Park before moving to LA to pursue her dream of fulfilling that cliché. Together, their first pilot earned them a place in the 2017 Black List x Women in Film Episodic Television Lab. Since then, they have co-written and co-directed the 2018 Black List Release Video, punched up movies for Universal and Disney, and made The 2019 LatinX List for their feature, Luna Likes. Currently, the two are working on an upcoming Sony feature and writing on the Disney Channel show Gabby Duran & The Unsittables.

Phillip Youmans is a filmmaker from the 7th Ward of New Orleans. At 19, he became the youngest and first African American director to win the Founder’s Award for Best Narrative Feature at the Tribeca Film Festival for his feature-length debut, Burning Cane, which he wrote, directed, shot, and edited during his final years of high school. Distributed by Ava Duvernay’s ARRAY Releasing, Burning Cane opened in select theaters and on Netflix in fall of 2019, and Youmans was nominated for a Gotham Award for Breakthrough Director for his work on the film.

Aisha is an undocumented nanny in New York City, caring for the privileged child of an Upper East Side family. As she prepares for the arrival of the child she left behind in her native country, a violent presence rattles her reality, jeopardizing the American Dream she has so carefully constructed.

Based on true events, a single mother fights to uncover the truth after her son dies in a subway station in China. Over the course of the investigation, she confronts an impenetrable bureaucracy but also rediscovers herself.

Estranged brothers Tito and Kgabane struggle to make a life on the fringes of Johannesburg. During a mercilessly dry winter, their dead mother suddenly arrives in the flesh, bringing childhood pain to the surface and forcing the brothers to confront the trauma that pulled them apart.

Set in 1966 Los Angeles, Tiger Girl is a coming of age fantasy about a repressed Chinese American teenage girl haunted by a tiger lurking in her attic. When pressured by her immigrant mother’s rigid social expectations, the girl must learn that the beast upstairs is the tiger within that will set her free.

With a background in fine art, visual effects, animation and puppetry, Andrew Thomas Huang is a visual artist and filmmaker whose collaborators include Björk, FKA twigs and Thom Yorke among others. Huang served as creative director for the immersive traveling VR exhibit Bjork Digital and his work has been shown at The Museum of Contemporary Art, NYC, the Sydney Opera House and The Museum of Contemporary Art, LA. Huang is an IFP filmmaker, a Cinereach fellow, a participant in the Film Independent Screenwriters & Directors Labs, and a recipient of the K Period Media Grant. His most recent narrative short Kiss of the Rabbit God premiered at the 2019 Tribeca Film Festival.

Documentarian Melissa feels compelled to invite Tarek, a Yemeni asylum-seeker and the subject of her latest film, into her London home. As Tarek brings the outside world crashing into these close quarters, it is Melissa’s trauma that begins to surface in unexpected and terrifying ways.

Nadia Latif is a theatre maker and film director, originally from Sudan. She has worked at theatres including the Almeida, Royal Shakespeare Company and Royal Court. She was Associate Director of the Young Vic from 2018-2020, where she most recently directed the sold out production of the Pulitzer-prize winning Fairview. Her first short film, White Girl, written by Omar El Khairy, was produced with BFI support, is currently in festivals, and was nominated for Best Short at the 2019 London Film Festival.

Omar El-Khairy is a former Leverhulme Associate Playwright at the Bush Theatre and an alumnus of The Old Vic 12. His plays include Burst, Sour Lips, The Keepers of Infinite Space, The Chaplain: or, a short tale of how we learned to love good Muslims whilst torturing bad ones, Homegrown and The Mob Reformers. His first short film, No Exit, received its world premiere at the Dubai International Film Festival 2014. White Girl, his latest short, supported by BFI NETWORK, premiered in competition for the Short Film Award at the BFI London Film Festival 2019. He is also co-directing a feature-length documentary with Ana Naomi de Sousa and Hakawati.

In addition to the Lab projects, the Feature Film Program will host Michelle Latimer as an Artist in Residence at the January Screenwriters Lab:

Michelle Latimer is the showrunner and director of the breakout Indigenous resistance series RISE (Viceland), which premiered at the 2017 Sundance Film Festival and won the 2018 Canadian Screen Award for Best Documentary Series. Her latest film Nuuca (Field of Vision) premiered at the 2017 Toronto International Film Festival, and screened at the 2018 Sundance Film Festival and Berlinale Film Festival. Latimer is currently showrunning and directing a six part scripted series, Trickster, that she co-created and adapted from bestselling author, Eden Robinson’s trilogy Son of a Trickster. She is also completing production on the documentary feature adaptation of Thomas King’s book Inconvenient Indian (Bell/HBO Canada) produced by 90th Parallel Productions and the National Film Board of Canada, for BellMedia. Michelle’s Métis/Algonquin heritage informs her filmmaking perspective, and much of her work is dedicated to the pursuit of Indigenous rights and sovereignty.