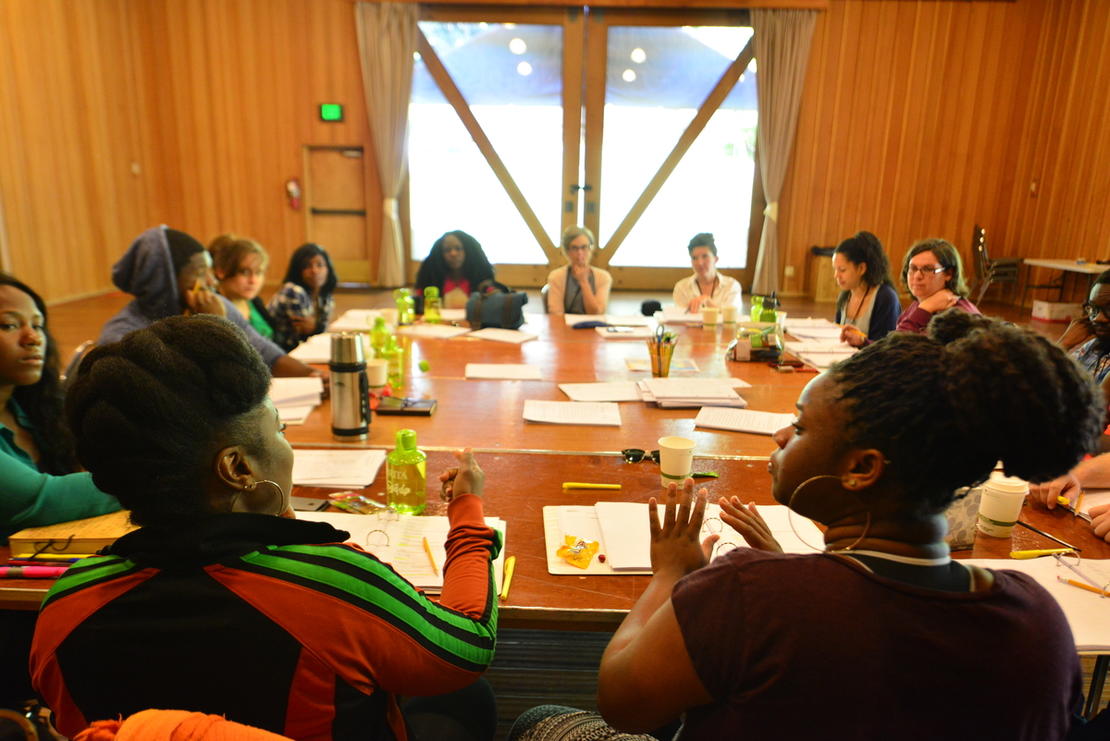 New York, NY— Today, Sundance Institute’s Theatre Program announces the nineteen artists who represent the creative teams that will convene to develop new work at the annual Lab at the Sundance Mountain Resort in Utah July 8-28.

Eight genre-spanning pieces, encompassing plays, musicals, and interdisciplinary work for the stage, are among the works being developed by fifteen Fellows and four Artists-in-Residence. This year’s cohort was selected by Theatre Program Artistic Director Philip Himberg, with support of a six-member Advisory Committee and in partnership with Producing Director Christopher Hibma.

The Lab offers these emerging and established theatre makers the opportunity to evolve their work with the benefit of a full acting company, a robust group of experienced dramaturgs and advisors, and the context of an intimate artistic community. The Lab is the centerpiece of the Institute’s year-round work with the theatre community, and for nearly four decades has creatively supported artists including Jackie Sibblies Drury, Heidi Schreck and Lynn Nottage, and projects including Indecent, Appropriate, and Fun Home.

Himberg said: “Sundance founder and President Robert Redford has noted that “Sundance deepens the resolve of artists by bringing them together in a creative community, so that they know they are not alone.” Curating the 2019 Theatre Lab’s particular community has been among the most rewarding duties of my time at Sundance; this year’s fellows, and their projects, represent the beauty and originality of global creative work for the stage.”

As previously announced, Himberg leaves the Institute today to assume the Executive Director role at the MacDowell Colony. Christopher Hibma has been tapped to helm the Theatre Program as its Director through an interim year of examination and listening, and is joined by Ana Verdein her new capacity as Manager. This new team will work closely with Institute Executive Director Keri Putnam to envision and explore the future of the Theatre Program, a vital element of Sundance Institute’s work supporting storytellers since its founding. At the 2019 Lab, Hibma will collaborate with director and Theatre Lab alumna Lisa Peterson, who will serve as Guest Artistic Director and Jumana Al-Yasiri continues in her capacity as Manager for the Program’s Middle East / North Africa year-round initiatives.

Hibma said: “I’m excited to serve as interim Theatre Program Director, and to lead the team in our year round support of theatre artists during this reflective year. We’re celebrating and building on Philip’s legacy as we explore new pathways for 21st century storytellers to innovate their creative practice. It is our ambition that Sundance remains a trusted resource for theatre-makers while we actively listen to the field and evolve our work to best support artists.”

This is one of 24 residency Labs the Institute hosts each year for independent artists in theatre, film, new media and episodic content. The Theatre Program’s international activity supports mentorship and cross-cultural exchange, focused on Arabic artists from the Middle East, North Africa and the diaspora, and has included programming in Lebanon, Germany, Morocco, France and the U.S.

Additional Lab participants, including the acting company, stage management, dramaturgs and creative advisors will be announced at a later date.

The 2019 Sundance Institute Theatre Lab Fellows and projects are:

A renowned male playwright has written a play about the ignominious downfall of a powerful business magnate. But when the lead actress meets with him to discuss a small problem with his writing of her character, the problem builds and magnifies and eventually unleashes a pandora’s box of issues plaguing America in this frightening and deeply precarious historical moment. The Blind King is a play about the nature of tragedy, and the nature of human nature.

Definition is a new musical that takes a surrealist look at a contemporary African American woman’s monotonous, disconnected city-existence. A visit to the museum breathes life into her inner world, and she falls in love with a Magritte painting. A look at delusion and how we walk with our demons every day.

Don’t Eat the Mangos tells the story of three sisters living outside of San Juan, Puerto Rico. The sisters are faced with the daunting task of caring for their cancer-stricken Mami and their wheelchair-bound Papi. Despite being paralyzed, Papi still rules his family through fear, intimidation, and the ringing of a small bell. Over the course of a hurricane ravaged night, family secrets surface, relationships are tested, and the sisters are forced to contend with a legacy of trauma.

Dreaming Zenzile is a play with music based on the extraordinary life of late South African singer and political activist Miriam Makeba. Dreaming Zenzile is set in Castel Volturno, Italy on the night of Makeba’s final performance and her death. Throughout the play, Makeba moves between the memory and evocation of real and dreamed experiences about her life journey while weaving through a musical landscape of modern jazz and South African musical traditions. ‘Zenzile’ is Makeba’s true first name. In her mother tongue Xhosa, it means “you have done it to yourself.” In short, Dreaming Zenzile is an exposition of the burdens and freedoms that accompany the gift of song and a meditation on the lasting power of the disembodied voice.

Dreaming Zenzile is made with the permission and courtesy of Miriam Makeba Foundation, Miriam Makeba Estate, and Mama Africa Cultural & Social Trust.

The Garden explores the relationship between an elderly African-American mother, Claire Rose, and her middle-aged daughter, Cassandra. Set in Claire Rose’s precious vegetable garden outside her tidy little house, the play runs in real time for an hour and a half of their lives. Claire Rose loves her daughter. With tough love and self sacrifice, she has prepared Cassandra, creating an achiever, an overcomer – a bulldog, in her own image. At the same time she’s at odds with Cassandra’s lifestyle, her life choices, and even her success as a film editor – all opportunities that Claire Rose never had. Two alpha women, who give as good as they get, take us on rollercoaster ride full of humor and pain: Mother and daughter shine a light on their secrets and betrayals.

Large is the distance between the city of London and Jenin. Jenin is the small grey city, where every bit of a life is an endless Sisyphean battle, crowded streets cracked like wrinkles on an old skin, sieged by the gazes of paddlers that stopped wondering. Dark are the roads of Jenin. The distance between London and Jenin lies by the difference between the great city of fog, and the small city of dust. In an immigration office in East London, Faisal and Alaa, two actors from Jenin with big dreams for success in the City of theatre, wait to apply. They practice for their interview, asking all the bureaucratic questions, and they find themselves struggling with fear, love and longing.

On That Day in Amsterdam

Two young men, an American backpacker and a Syrian refugee, meet in a gay club in Amsterdam and spend a day together knowing their paths will never cross again. As they visit the homes of Rembrandt, Van Gogh, and Anne Frank, they discover the meaning of love, art, and escape in the context of Europe’s migrant crisis.

This is a one-man show that follows the unusual story of a heart surgeon turned satirist in the wake of the Arab Spring. Bassem Youssef takes the audience on a funny — yet scary — journey to show people the cost of laughing in the face of tyranny. The show follows Bassem as he escapes from Egypt to land in America at a very unwelcoming time for an immigrant. Through storytelling, standup, multimedia and music, Bassem tells a unique story in a unique style.