Behind the Scenes of HITS' "Pay What You Want" Film Release

With a heady mix of naivety and cockiness, around a year ago, we (Honora) made a move into distribution (read about Honora’s recently announced involvement with the pilot program BitTorrent Now here). David Cross’ feature directorial debut HITS premiered at the 2014 Sundance Film Festival and on its opening night we fielded (what in retrospect) was a generous offer from a well-known distributor. The offer included a plan that would see the film theatrically distributed in 10 major markets with a reputable distributor brand behind it. We asked what the marketing plan would be and the response was that the film’s release would come complete with a trailer and a poster and some paid ads. This cookie cutter indie film release took the wind out of our sails and like many a delusional producer we felt that the film deserved more.

We talked to our director about a couple of different plans. One was to take the traditional offer and the other was to try something completely different by working with BitTorrent to be the first transactional film on the platform. David, being untraditional, threw his lot into the alternative approach. He was an incredible partner, completely devoid of ego and even fronted a Kickstarter campaign to help us release the film. Whoever got his beard trimmings in a box paid quite handsomely for them!

As we developed the distribution plan, there was a pretty consistent response to the idea of selling the film on BitTorrent. The argument was that people would simply pirate the movie, so we decided that we would release it as a Pay-What-You-Want Campaign on as many platforms as possible. We’d then conduct a study into where the most generous audiences are located both geographically and also across platform! Alas, only BitTorrent and about 50 movie theaters decided to get on board the PWYW initiative. We did manage to distribute across all VOD channels and also concurrently had a more traditional theatrical release.

Here’s a bit of an update, a year on. This is how it went down or at least what we remember. The plan was as follows:

Pay What You Want

Launch the film as a Pay-What-You-Want release, in theaters and on platforms anywhere. We researched various studies into PWYW pricing and understood that you need 3 variables at play to make it work:

1. Something of value – we had a film, so we figured that must have some value.

2. A time limit on the offer to create the idea that the offer is going to expire.

The average price paid on BitTorrent was around $6.00. We discovered that there are paying customers on BitTorrent and at a mean level that produced higher returns back to the film than any other VOD platform. Geographically across theaters the average price paid varied – Los Angeles being on the stingier side of donators and Minneapolis being quite generous. See below. 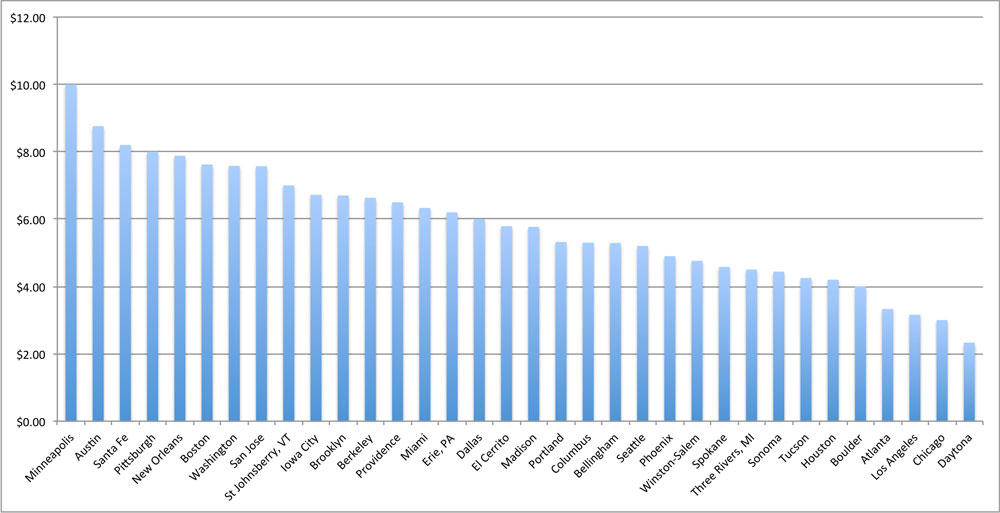 The Power of Press

We generated over $1M of editorial value with our experiment. It was a news story. It’s hard to understand what the conversion rate to actual transactions would be but it’s clear that by having a story – and having a well-known figure tell that story – there are publications that will spread the word for you. The Wall Street Journal, Vanity Fair, Rolling Stone, Vice and many more publications gave us coverage on the story that we would release a film everywhere, at the same time, at a price that anyone can choose.

In spite of being told otherwise, we were still able to work more traditionally with existing transactional platforms. iTunes supported the film with some good merchandising, as did other partners. Theaters actually ended up contacting us to be a part of the PWYW initiative and David made a surprise trip to Oklahoma to have some beers with the audience after watching.

There are some things we didn’t do so well. Timing was very much a part of the puzzle. We generated most of our press on announcing what we were planning to do vs. when we were doing it! We should have collapsed all of the masses of publicity around the point in time in which you could buy the film so we could capitalize on that moment in time. Instead, we launched 2 weeks later and as we all know from our relationship with cell phones, everyone is attention deficit and we’re not sure if we capitalized fully on it. All of that press earlier on probably did some good for us by way of awareness, but I think we could have been more aggressive around the launch. Also, we left some money on the table with Cable TVOD. We simply couldn’t wrap our heads around how to farm that out most effectively.

No doubt though, we hustled and learned so much and in doing so we became a boutique distributor in 2015. Our efforts with HITS did not go unnoticed and we were asked to distribute and market a film called Kajaki that was nominated for a BAFTA. We renamed it Kilo Two Bravo, took it to TIFF, successfully launched it theatrically and across all VOD platforms including iTunes where it was featured in the top 12 spots for over a week, surrounded by studio fare. We successfully identified an audience and marshaled creative and partnership efforts around the launch. Most of all we have become better producers from understanding the challenges of distribution and the need for independent films to understand their audiences and have genuine care and passion behind the marketing and distribution efforts. We also recently brought on a new member to the team to shore up our distribution efforts, Abe Schwartz, who joined us from the The Orchard.

If you haven’t seen it, HITS is on Netflix... um I mean, you should buy it on iTunes! We’re creeping over our MG offer from Sundance so we’re starting to feel a bit better about the efforts from a commercial perspective.