Sacred Storytelling, Zellner Style: Catching Up with a Family of Sundance Vets 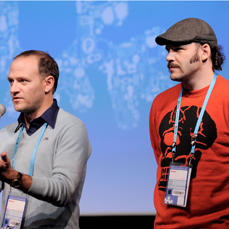 David and Nathan Zellner at the Festival | Photo by Jemal Countess

When asked about his favorite Festival experience thus far, veteran filmmaker David Zellner is quick to respond: “Sharing our feature Goliath with an enthusiastic audience. A close second was eating hamburgers on Main Street with Magic Johnson, Gaspar Noe, and Louie Anderson.”

To call the Zellner Bros (David and Nathan) “seasoned vets” doesn’t fully summarize how crazy and uncommon their run has been. Coming close to breaking a Sundance Film Festival record for most films ever in the Festival, the Austin-based “film family” has nearly become a Park City staple.

After screening five shorts and one feature (Goliath) at the Fest, the talented duo is back this year with their newest short film Sasquatch Birth Journal 2, which is about…well, how does one put it best…a Sasquatch Birth Journal. It’s strange, odd, absurd, and true to the Zellner SFF “legacy”—very unique in its own hysterical way.

Circumcision. Cats. Monkeys. Explosions. Tall tales. Shark attacks. In the Zellners’ world, no animal, subject, or person is too sacred to explore for storytelling. And though each film is remarkably different from the next, there’s something wicked and weird—and nearly inexplicable—that ties them all together. Almost like a trademark tone without a particular formula. In other words, a Zellner film has no equal, only friends, furry ones included.

“We’ve been obsessed with the noble Sasquatch since watching In Search Of… as children–right up there with Little House on the Prairie as my all-time favorite TV show,” recalls David. “We want to believe, so yes, we believe. Overall we think of the sasquatch as a friend, but we also have the unhealthy, unrealistic desire to pet and cuddle wild animals.”

He continues: “We don’t typically like to brag, but feel this is quite possibly the most important piece of sasquatch material ever produced. True story—we recently tried to present our film at a Bigfoot convention, and they flat-out refused, presumably out of jealousy and/or sexism toward the subject matter. One other thing we should mention is that SBJ2 is a companion piece to Sasquatch Birth Journal 1, a yet to be completed 24-minute fully immersive installation on a similar theme.”

When asked what it’s like to work with his brother, and how their work process actually breaks down as co-directors, David lays it out fairly simply: “I approach the material from more of a creative standpoint. Nathan is more technical, but everything overlaps. We meet in the middle and crank out magic.”

Many people have seen this Festival evolve as patrons. Others as staff. Only a limited—and lucky—few have seen the Festival change as filmmakers. To that effect, David notes, “The main thing we’ve noticed personally is that each time we have more and more pals screening work here, which is really exciting.”

Up next for the Zellner Bros? “We have a couple of features underway that we’re really excited about,” David comments. “We love making shorts but it’s time for some more feature work.” In other words, if I were a betting man, one shouldn’t declare this the last time you’ll see these guys in town.