Watch This: 12 Women-Directed Films That Have Gone Through the Sundance Labs 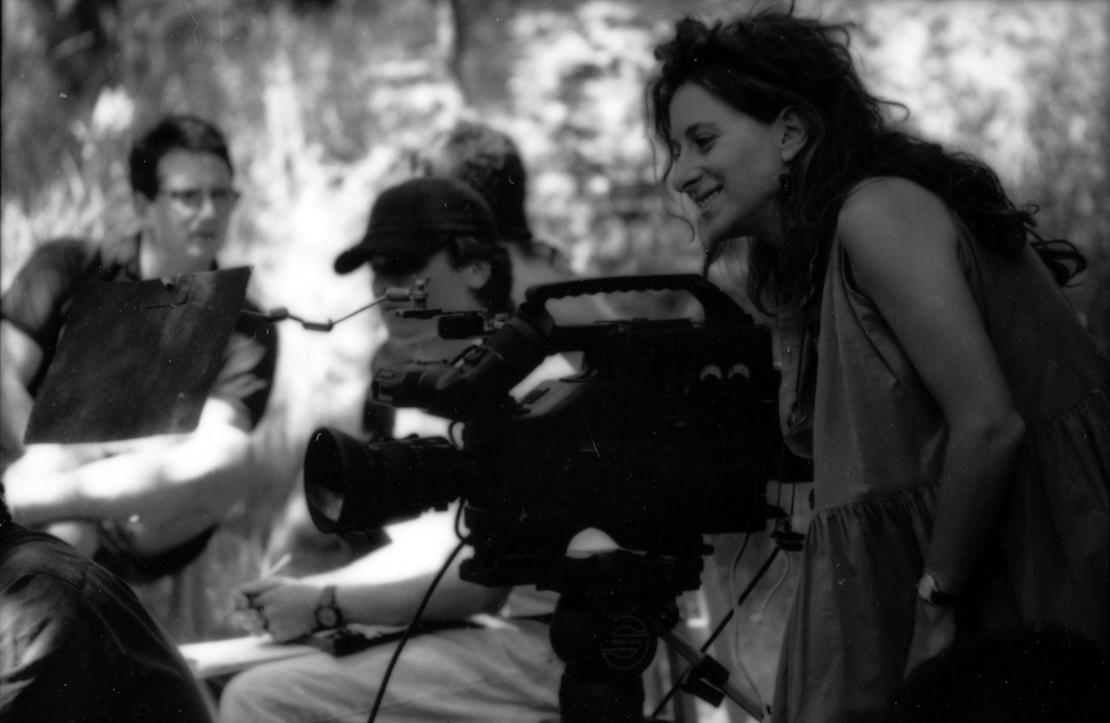 In June 1982, a group of independent filmmakers arrived at the Sundance Mountain Resort to attend the then-fledgling Sundance Institute’s second-ever Directors Lab—among them, a Harvard undergrad named Marisa Silver, who was there to workshop her coming-of-age story Old Enough. Working with a group of advisors that included Institute founder Robert Redford, actress Mary Beth Hurt, and Street Music director Jenny Bowen, Silver laid the groundwork for a project that would eventually introduce young actresses Rainbow Harvest, Sarah Boyd, and Alyssa Milano to the world.

To kick off Women’s History Month, we dug through the Institute’s archives to get the stories behind 11 such projects that have since been produced, offering up a peek behind the scenes and celebrating the careers of these groundbreaking women directors. From Silver’s ’80s debut to ’90s triumphs like Gina Prince-Bythewood’s Love & Basketball to recent films like Nia DaCosta’s Little Woods (which screened at the 2019 Sundance Film Festival), these projects span a wide range of genres and thematic concerns, but have one thing in common: They started take shape one summer at the Sundance Mountain Resort.

P.S.: Don’t miss out on our recent story celebrating a long line of visionary black women directors with ties to Sundance Institute.

Marisa Silver was still a student at Harvard University when she attended the 1982 Directors Lab to work on her debut feature, Old Enough, about a close friendship between two teenage girls living in New York City. After the lab, Silver and her sister, producer Dina Silver, secured a $50,000 investment from Sundance—a first for the Institute. The finished film, shot in New York City on a budget of $400,000, eventually made its premiere at the 1984 Festival, where it won the Grand Jury Prize: U.S. Dramatic. Thanks to a wave of rave reviews at Cannes and other Festivals that same year, plus a national release by Orion Pictures, the 24-year-old director was given a bigger budget for her second feature, Paramount’s Permanent Record. [WATCH OLD ENOUGH]

Sundance Institute founder Robert Redford personally invited French West Indian filmmaker Euzhan Palcy to participate in the 1985 Directors Lab after being impressed by her debut feature, 1983’s Sugar Cane Alley. Palcy arrived at the resort ready to work on her follow-up, A Dry White Season, which would eventually be released by MGM in 1989, making 32-year-old the first black woman director to helm a major Hollywood studio title. Filmed in Zimbabwe, the project—based on André Brink’s book about apartheid in South Africa, and starring Donald Sutherland and Marlon Brando—was made on a $9 million budget. [WATCH A DRY WHITE SEASON]

Writer-director Nicole Holofcener has shown three feature films at the Festival over the years, but her very first trip to Park City was for the world premiere of her 1991 short, Angry. A few years later, she was tapped to bring her debut feature, Walking and Talking, through the 1992 Directors Lab (as seen above). It eventually had its world premiere at the 1996 Festival. Since then, Holofcener has brought Friends with Money (2006) and Please Give (2010) to Sundance, in addition to serving as a creative advisor in a number of Institute labs. In 2018, she received an Academy Award nomination for Best Adapted Screenplay for her script for Can You Ever Forgive Me? [WATCH WALKING AND TALKING]

A few years after she graduated from film school at UCLA, Gina Prince-Bythewood brought her coming-of-age romantic drama through the 1997 Directors and Screenwriters labs. But as she later told the Calgary Herald, she wasn’t initially convinced about casting actress Sanaa Lathan, who accompanied her to Park City that summer for the labs: “I loved what she did at the reading, but she had never touched a basketball.”

After auditioning more than 700 actresses, Prince-Bythewood returned to Lathan, who had spent time sharpening her skills via pickup games and by intensively training with a coach, and the rest is history. The Spike Lee–produced film later had its world premiere at the 2000 Sundance Film Festival and went on to attain cult status. Since then, Prince-Bythewood has also served as a creative advisor, artist trustee, and panelist for the Institute, and her episodic project, Shots Fired, premiered at the 2017 Festival. [WATCH LOVE & BASKETBALL]

Back in 2003, Miranda July—then an acclaimed multimedia performance artist—brought her debut feature, Me and You and Everyone We Know, through the Sundance Institute’s Directors Lab. The film later had its world premiere at the 2005 Festival, hipping the world to the meaning of ))<>((. Since then, she’s gone on to write and direct acclaimed projects like 2011’s The Future as well as Kajillionaire, which played last year’s Festival. [WATCH ME AND YOU AND EVERYONE WE KNOW]

In 2006—the same year her acclaimed debut feature, Treeless Mountain, premiered at the Sundance Film Festival, writer/director So Yong Kim brought her follow-up, In Between Days, through the Institute’s Screenwriters and Directors labs. The latter project, a moving drama about two young sisters who have been abandoned by their mother, made its debut at TIFF in 2008 and was released by Oscilloscope stateside. Kim has since brought In Between Days (2009, Special Jury Prize for Independent Vision), For Ellen (2012) and Lovesong (2016) to Park City for the Festival. [WATCH TREELESS MOUNTAIN]

Maryam Keshavarz offered audiences a rare glimpse of forbidden love in today’s Iranian youth culture with her debut feature, Circumstance. Incubated in the 2007 Screenwriters and Directors Labs, the project went on to have its world premiere at the 2011 Sundance Film Festival. “Splendidly constructed and saturated with a sumptuous sense of style and sensuality, Circumstance marks the arrival of an exciting, original talent,” wrote programmer Shari Frilot in that year’s Festival catalog. [WATCH CIRCUMSTANCE]

Sydney Freeland’s debut feature came through the Institute’s 2009 NativeLab and 2010 Screenwriters and Directors Labs. Conceived as a personal response to a news story that characterized her hometown of Gallup, New Mexico, as “Drunktown, USA,” the film observes the Navajo Nation from the inside out through the eyes of three unlikely characters. “Shot against a mesmerizing New Mexico landscape, Drunktown’s Finest portrays such a strong underlying tradition of acceptance and family that we start to wonder whether the outside world these characters crave is truly the answer,” wrote Indigenous Program director Bird Runningwater when the film premiered at the 2014 Sundance Film Festival. [WATCH DRUNKTOWN’S FINEST]

Marielle Heller’s relationship with Sundance Institute began in 2012, when she brought her ’70s-set coming-of-age drama The Diary of a Teenage Girl through our Directors and Screenwriters labs. The film—based on the graphic novel of the same name by cartoonist Phoebe Gloeckner—had its world premiere at the 2015 Sundance Film Festival, where we awarded Heller with our Vanguard Award, and the project eventually picked up the Independent Spirit Award for Best First Feature. Since then, Heller has racked up numerous awards and nominations for her follow-up features, 2018’s Can You Ever Forgive Me? and 2019’s A Beautiful Day in the Neighborhood. [WATCH THE DIARY OF A TEENAGE GIRL]

In an interview with Indiewire, writer/director Nia DaCosta explained that she began thinking through ideas for her debut feature, Little Woods, back in 2014, amid a raging national debate over women’s healthcare issues. “I was really struck by what felt like a total lack of any real connection being made to people’s actual lives,” she said. “And so I wanted to tell a story about that, but from the perspective of women who lived in rural America, particularly those who are living in poverty.” The film went through the Institute’s Writers and Directors labs in 2015, and the film had its premiere at the 2019 Festival. The industry has clearly taken notice: DaCosta was tapped by Jordan Peele to write and direct an update on the 1992 cult classic Candyman, set for release later this year. [WATCH LITTLE WOODS]

“In her knockout feature debut, Radha Blank writes, directs, and delivers a devastatingly endearing onscreen performance,” wrote our programming team when The 40-Year-Old Version premiered. “The quintessential plight of an artist selling out or being true to oneself has never felt so fresh. Shot on black-and-white film, Blank features New York City and in turn claims it all for her own.” Blank brought her comedy through the 2017 Screenwriters and Directors Labs, and took home the Directing Award: U.S. Dramatic at the 2020 Festival. [WATCH THE 40-YEAR-OLD VERSION]

In 2013, writer-director Tayarisha Poe brought an early draft of Selah and the Spades through our Screenwriters Intensive in Philadelphia. In 2017, she attended the Screenwriters and Directors Labs at the Sundance Resort, and in 2019, the film had its world premiere in the Festival’s NEXT section. Poe’s compelling drama takes viewers inside the halls of an elite boarding school where tensions between student cliques play out in a Shakespearean fashion. “This searing character study encapsulates just how intoxicating power can be for a teenage girl who acutely feels the threat of being denied it,” wrote our programmers. “Exciting newcomer Lovie Simone’s performance beautifully embodies both Selah’s publicly impeccable command and the internal fears and uncertainty that drive it.” [WATCH SELAH AND THE SPADES]