What to Watch: Sundance-Supported Films Offer Perspective Into Reproductive Rights 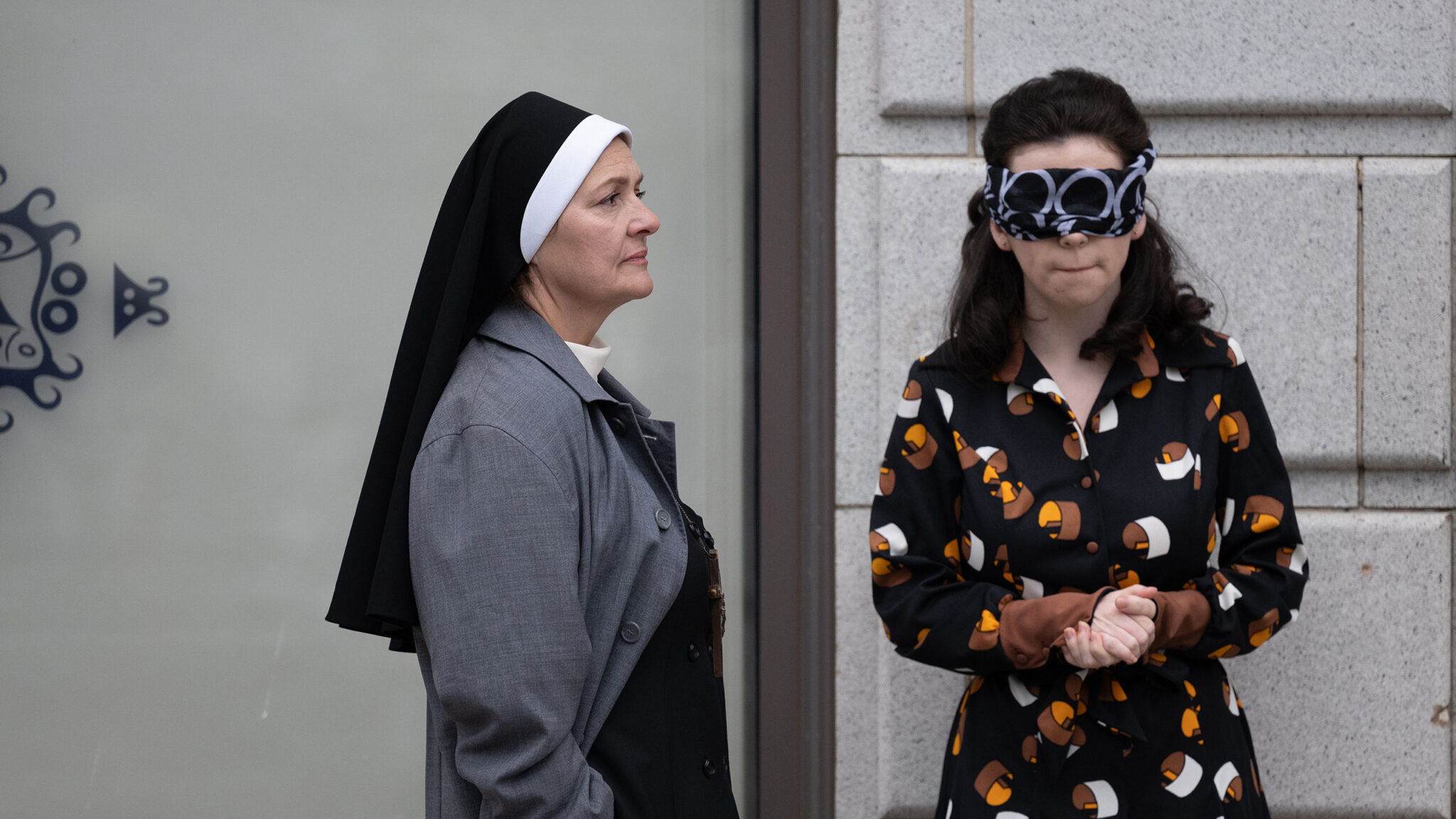 Sometimes you have to let art speak for itself. As 2022 Sundance Film Festival favorites hit theaters and streaming sites, several new releases tackle issues surrounding reproductive rights. It was a clear theme this year when filmmakers Audrey Diwan, Tia Lessin, Emma Pildes, and Phyllis Nagy told harrowing stories of what can happen when a woman’s reproductive rights are taken away.

Movies aren’t solely meant to entertain; they’re also designed to help us understand important issues — like reproductive health — more clearly. With The Janes releasing in just days, Happening hitting theaters last month, and Call Jane coming in October, we’re spending this month looking back at the powerful Q&A panels that followed their premieres in January. Check back weekly to hear from the artists as they discuss intellectual freedom, challenging policymakers, Roe v. Wade, and more.

But first, let’s take a look at the films centered on reproductive rights that premiered at past Sundance Film Festivals and/or were supported by the Sundance Institute. From tales of filmmakers and activists coming together to ignite change, to real-life accounts from women involved in a Chicago-based underground clinic, here are 20 Sundance films to help you stay informed on reproductive health and rights.

Aftershock (documentary, 2022 Sundance Film Festival) — A disproportionate number of Black women are failed every year by the U.S. maternal health system. Shamony Gibson and Amber Rose Isaac died due to childbirth complications. Directors Paula Eiselt and Tonya Lewis Lee follow Gibson’s and Isaac’s bereaved partners, along with their grieving families, as they fight for justice and build communities of support. (Coming soon to Hulu)

Call Jane (fiction, 2022 Sundance Film Festival) — Phyllis Nagy directs this film about suburban housewife Joy (Elizabeth Banks) who lives an ordinary life with her husband and daughter until her pregnancy leads to a life-threatening condition. Now she must navigate a medical establishment unwilling to help. Her journey to find a solution to an impossible situation leads her to the “Janes,” a clandestine organization of women who provide Joy with an alternative — and in the process, change her life. (Coming to theaters this October)

Happening (fiction, 2022 Sundance Film Festival) — In Audrey Diwan’s award-winning feature based in 1963 France, a promising young university student is devastated to learn she’s pregnant. She immediately insists on termination, but her physician warns of the unsparing laws against either seeking or aiding abortions, and her tentative attempts to reach out to her closest friends are nervously rebuffed. As weeks pass, an increasingly desperate Anne persists in seeking any possible means of ending the pregnancy in hopes of reclaiming her hard-fought future. (Now in theaters)

The Janes (documentary, 2022 Sundance Film Festival) — In the spring of 1972, police raided an apartment on the south side of Chicago, where seven women who were part of a clandestine network were arrested and charged. Using code names, fronts, and safe houses to protect themselves and their work, the accused had built an underground service for women seeking safe, affordable, illegal abortions. They called themselves “Jane.” Through The Janes, co-directors and Sundance Film Festival alumni Tia Lessin and Emma Pildes offer firsthand accounts from the women at the center of the group, many speaking on the record for the first time. (Coming to HBO Max June 8)

Just Another Girl On The I.R.T (fiction, 1992 Sundance Film Festival, Collection screening in 2022) — Director Leslie Harris’ coming-of-age chronicle tells the story of an intelligent high schooler who aspires to get out of her poor neighborhood, go to college and become a doctor. But her dreams begin to slip away as she discovers she is pregnant. (Available to stream on Hulu, The Roku Channel and Starz)

Abortion Helpline, This Is Lisa (documentary short, 2020 Sundance Film Festival) — At a Philadelphia abortion helpline, counselors answer nonstop calls from women who seek to end pregnancies but can’t afford to. In this documentary by filmmakers Barbara Attie, Mike Attie and Janet Goldwater, audiences see how economic stigma and questionable laws determine who has access to abortion. (Available to stream for free on Amazon Prime and The Roku Channel)

Never Rarely Sometimes Always (fiction, 2020 Sundance Film Festival) — Director and screenwriter Eliza Hittman’s film follows Autumn, a stoic, quiet teenager in rural Pennsylvania facing an unintended pregnancy. Left without viable alternatives for termination in her home state, she and her cousin board a bus to New York City. With only a clinic address in hand and nowhere to stay, the two girls venture into the unfamiliar city. (Available to rent on Apple TV)

Premature (fiction, 2019 Sundance Film Festival) — In director Rashaad Ernesto Green’s film set in Harlem, a 17-year-old poet begins a romance with a music producer who has just moved to the city during her last months at home before starting college. When she becomes pregnant, she’s faced with a difficult decision that could change her life forever. (Available to stream on Hulu, The Roku Channel and Amazon Prime)

Lucia, Before and After (documentary short, 2017 Sundance Film Festival) — Anu Valia’s award-winning Sundance short follows a young woman who, after traveling 200 miles, waits out the Texas state-mandated 24-hour waiting period before her abortion can proceed. (Watch now on Vimeo)

Motherland (documentary, 2017 Sundance Film Festival, DFP grant) — This stirring vérité portrait directed by Ramona Diaz takes viewers into the heart of the planet’s busiest maternity hospital in the Philippines. Unseen observers in this frenetic and understaffed landscape, we enter hectic birthing rooms and pass through overcrowded hallways bursting with life. Through her sensitive documentation of these personal journeys to motherhood, larger truths about the lack of reproductive health-care policy are revealed in one of the most populous countries in the world. (Available to stream for free on Peacock)

Trapped (documentary, 2016 Sundance Film Festival) — Since 2010, nearly 300 TRAP (Targeted Regulations of Abortion Providers) laws have been passed by conservative state legislatures. Unable to comply with these far-reaching measures, clinics have taken their fight to the courts. As the U.S. Supreme Court was getting ready to decide in 2016 whether individual states may essentially outlaw abortion (Whole Woman’s Health v. Hellerstedt), director Dawn Porter’s Trapped followed the struggles of the clinic workers and lawyers who were on the front lines of a battle to keep abortion safe and legal for millions of American women. (Available to rent on Amazon Prime)

Grandma (fiction, 2015 Sundance Film Festival) — Director Paul Weitz’ comedy-drama follows Elle (Lily Tomlin), a lesbian poet and widow, as she gets a visit from her teenage granddaughter (Julia Garner) seeking money for an abortion. Over the space of a day, they visit numerous people from Elle’s past to call in favors in an effort to raise the money. (Available to stream on Hulu and Amazon Prime)

Obvious Child (fiction, 2014 Sundance Film Festival) — A 27-year-old Brooklyn comedian’s unplanned pregnancy forces her to confront the realities of independent womanhood for the first time. As her date with Planned Parenthood draws near, she must confront her doubts and fears. Director Gillian Robespierre delivers an unlikely yet effective combination of scatological humor, raw human honesty, and sweet romance. (Available to stream on Fubo, Showtime, Kanopy and Direct TV)

After Tiller (documentary, 2013 Sundance Film Festival) — Only four doctors in the United States continue to perform third-trimester abortions since the assassination of Dr. George Tiller in Kansas in 2009. All colleagues of Dr. Tiller, they sacrifice their safety and personal lives to help the women who come into their facilities. But for many in the pro-life movement, these doctors must be stopped. Directors Martha Shane and Lana Wilson offer audiences an unprecedented perspective: After Tiller gives an intimate look into each of the four physicians’ private and professional struggles. (Available to rent on Apple TV).

12th & Delaware (documentary, 2010 Sundance Film Festival) — Using cinema-vérité observation that allows us to draw our own conclusions, directors Rachel Grady and Heidi Ewing expose the molten core of one of America’s most intractable conflicts. At 12th & Delaware in Fort Pierce, Florida, is both a for-profit abortion clinic and a Roman Catholic Church-supported pregnancy clinic whose mission is to prevent women from obtaining abortions. (Available to stream HBO Max; rent on Apple TV)

Young Lakota (documentary, 2007 Sundance Documentary Film Grant) — Marion Lipschutz and Rose Rosenblatt’s film tells the story of three young Lakotas on the Pine Ridge reservation who are swept into a high-stakes tribal election that hangs on sovereignty, representation, and abortion politics. (Available to stream for free on Kanopy)

Life, Liberty & the Pursuit of Happiness (documentary short, 2003 Sundance Film Festival) — Tiffany Shlain’s updated version of the 1950s school documentary Life, Liberty and the Pursuit of Happiness offers political and social commentary on the state of reproductive rights. The film follows the fictional stories of a conservative politician, a young couple, a fundamentalist activist, and a Chinese dry cleaner, to illuminate the erosion of reproductive rights in the United States. (Watch now on YouTube)

The Pill (documentary, 2003 Sundance Film Festival) — In May 1960, the FDA approved the sale of a pill that arguably would have a greater impact on American culture than any other drug in the nation’s history. The Pill follows the key players in the development of the drug: two elderly female activists who demanded a contraceptive women could eat like aspirin, and then paid for the scientific research; a devout Catholic gynecologist who believed a robust sex life made for a good marriage and argued tirelessly that the pill was a natural form of birth control; and a brilliant biologist who talked a pharmaceutical company into risking a possibly crippling boycott to develop this revolutionary contraceptive. In describing the obstacles they all hurdled, producer, director and screenwriter Chana Gazit presents a compelling account of a society in transition. (Access the film’s full transcript on PBS)

Citizen Ruth (Meet Ruth Stoops) (fiction, 1996 Sundance Film Festival) — Alexander Payne’s dark comedy follows Ruth (Laura Dern), a reckless, drug-addicted, recently impregnated woman who soon becomes the unwitting symbol in a pro-life versus pro-choice tug-of-war. Ruth finds herself in the middle of an abortion debate when both parties attempt to sway her to their respective sides. (Available to rent on Apple TV).

Jane: An Abortion Service (documentary, 1996 Sundance Film Festival) — The documentary recounts the response of activist Heather Booth and several other female activists to the crisis of unsafe, illegal abortions. They created an abortion collective that would be known by its code name: Jane. Unfolding in intimate recollections by the women who were involved with Jane, Jane: An Abortion Service, directed by Kate Kirtz and Nell Lundy, relates a dynamic story of female activism. (Available to stream for free on Kanopy)