What to Watch at the 2022 Festival: Films Examining Religion 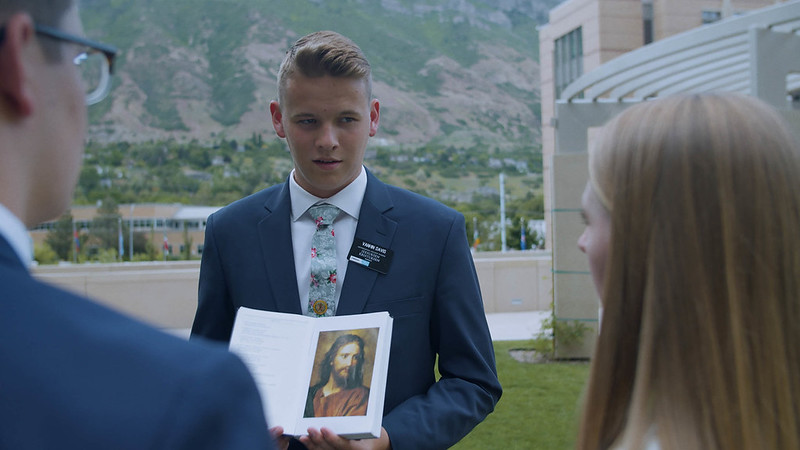 Elder Tyler Davis appears in The Mission by Tania Anderson, in the World Documentary Competition.

Religion can be a delicate subject. For some, it is a guiding light and source of solace; for others, it has become a source of discrimination and persecution. For better or for worse, religion has the power to shape individual lives and entire cultures. The influence of religion is evident in the 2022 Sundance Film Festival lineup in both fiction and nonfiction, from laugh-out-loud satire, to quiet meditations, to heartbreaking testimonies.

Read on for selections from the 2022 lineup in which religion features prominently. And you don’t have to be religious to connect with the characters and subjects of these films; it’s enough to be a human looking for purpose.

Honk For Jesus. Save Your Soul. (Premieres) — Trinitie Childs (Regina Hall) is the first lady of Wander To Greater Paths, a Southern Baptist megachurch preparing to reopen after a very public scandal involving her husband, Pastor Lee-Curtis Childs (Sterling K. Brown), forced a temporary closure. Filmed partly in a faux-documentary style, this feature debut directed by Adamma Ebo and produced by her twin sister, Adanne Ebo, is a bold satire that juxtaposes the flashiness of prosperity gospel with the ugly truths lurking behind the scenes.

The Mission (World Documentary) — Tania Anderson’s debut feature follows four American missionaries as they travel to Finland to spread the teachings of The Church of Jesus Christ of Latter-day Saints. With unprecedented insight into the daily lives of these young individuals, this documentary sees beyond the neckties and nametags to share the missionaries’ hopes, goals, fears, and doubts as they navigate an unfamiliar country. The Mission is a journey of lows and highs, from tough Finnish language lessons, homesickness, and a dismissive populace to successful baptisms, friendships, and a renewed sense of purpose.

Midwives (World Documentary) — Hla, a Buddhist, operates a makeshift clinic in a village in western Myanmar, where the Rohingya, a Muslim minority group, are persecuted and deprived of rights and resources. Nyo Nyo is a Muslim and an apprentice midwife studying under Hla. Despite the chaos and violence surrounding her, Nyo Nyo has ambitions to provide health care to her community. Snow Hnin Ei Hlaing’s debut feature-length documentary observes the complicated relationship between these two women who work together to help bring new life into a harsh environment.

Nothing Compares (World Documentary) — Sinéad O’Connor emerged from an abusive childhood with an undeniable talent and a strong refusal to conform to the societal expectations imposed upon her in predominantly Roman Catholic Ireland. Kathryn Ferguson’s debut feature documentary focuses on O’Connor’s life in the late 1980s and early 1990s, when the singer was building her career and establishing herself as a voice on issues such as abuse in the Roman Catholic Church, sexism, abortion rights, and racism. Archival footage and exclusive interviews paint a powerful portrait of a young artist determined to use her talent and platform to speak truth to power.

Tantura (World Documentary) — In the 1990s, Teddy Katz submitted a graduate thesis positing that a massacre had taken place in the Palestinian village of Tantura during the war in 1948. Although he was initially academically successful, Katz’s work went on to be heavily criticized by former Israeli soldiers, who eventually sued Katz for libel. In Tantura, director Alon Schwarz reexamines Katz’s claims, which relied on hours of audio testimonies. Schwarz’s interviews with former soldiers and Palestinian residents, interspersed with the 20-year-old recorded testimonies, reveal a contradictory narrative that speaks to the power of silencing, self-preservation, and the rewriting of history.

Three Minutes – A Lengthening (Spotlight) — In 2009, Glenn Kurtz unearthed a 16mm home movie from his parents’ closet. The film consisted of footage that his grandfather had shot while on a European holiday in 1938 — including what would turn out to be the only extant footage of Nasielsk, Poland, a predominantly Jewish town destroyed by the Nazis a year later. Directed by Bianca Stigter and narrated by Helena Bonham Carter, this film essay delves into the context and history of those three minutes of footage, granting its subjects new life with every replay.