Tusi Tamasese Captures His Native Samoa in “The Orator” 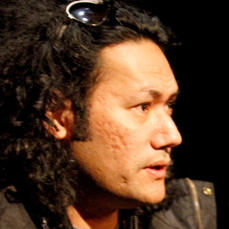 Director Tusi Tamasese will trade in South Pacific sand for Sundance snow when he makes his first trip to the U.S. to screen his film The Orator. This is just one of many firsts for Tamasese’s film which premiered at the Venice Film Festival last year.

The Orator is the first Samoan-language feature film shot entirely in Samoa using mostly local nonprofessional actors. Although Tamasese now resides in Wellington, he was born and raised in Samoa and for his directorial debut he wanted to return to a world that he knew well — a world that the rest of us know not so well.

Tamasese recalls that the idea to study filmmaking occurred to him because it was the course page he turned to in a university catalog. If he shrugs off how he came into filmmaking, he still seems destined to have made this film. It also seems the distance of leaving Samoa when he was 18 was the right amount to gain some perspective on the indigenous culture.

“I had a foreign view and a Samoan view… and I tried to imagine the script with the sensual images of the culture,” explains Tamasese, whose filmmaking is meticulous with sensory details — the overwrought green of a taro plantation, rain pouring down the faces of villagers, the slapping of mats unfolded as death offerings. “It’s a hard process to dissect a culture that is very rich,” he acknowledges. “But I think from the feedback I’ve received from foreigners is that they are able to understand the Samoans.”

The film follows the story of a Saili, a little person and taro farmer who tries to protect his land from poachers and his wife from the family who banished her many years before. But first Saili must reclaim his father’s chiefly title by persuading the elderly village chief of his great physical strength and oratory skills. Through the various rounds of negotiations among the villagers, we begin to see the spirituality and humanity of this culture in life and death.

Rendering this authenticity was, well… “It’s bloody hard,” Tamasase warns of shooting in a country without any filmmaking infrastructure, going into the thick, battling the weather, and invading people’s everyday lives. “But the people were very accommodating and generous,” says Tamasase who had to kindly ask many locals to turn down blaring radios while shooting. He eventually found his ideal location. “I wanted the old village formation which is before the missionaries arrived,” recalls the director. “There are only a handful of those villages left, but I managed to use one.” And so his film also becomes a documentation of a fading tradition.

He noted how Samoa is not as commercialized as Fiji or Tahiti in terms of tourism. But as more skyscrapers are appearing and the usual internet cafés have popped up, the conflict between old and modern has become more apparent. As the main character of his film fights to preserve what is sacred about his home, his stepdaughter resists those traditions—she has an affair with a rugby player and wants to escape in her uncle’s fancy S.U.V.

“I used a lot of wide shots,” Tamasese says of his holistic approach. “To see a Samoan you need to see him in his environment.”

But even as he captured his homeland’s changing landscape, he knew that ultimately the film was about holding on to the past. “Samoa is a very spiritual culture—we are very connected and we hold on to that [familial] bond. We bury our loved ones in front of our homes.”

The great humanity of this film — and the Indigenous culture it captures — has clearly struck a chord: New Zealand has submitted the film as its Best Foreign Language Film nomination for an Academy Award. This type of international support is proving to be less of an anomaly for indigenous films, notes Bird Runningwater, the director of Sundance Institute’s Native American and Indigenous Program.

“Sundance has been advocating for these films over the last 20 years and these films are now reaching wide audiences,” he added. “There is an internalization of Indigenous film happening in the world, including Sterlin Harjo’s Barking Water (which also played in Venice), and Taika Waititi’s work that has won awards at the Berlinale, and Andrew Okpeaha MacLean’s On the Ice, which just opened in France last December.”

This type of cultural exchange is a vital part of the film’s deep and lasting impact — one he hopes will continue at Sundance.