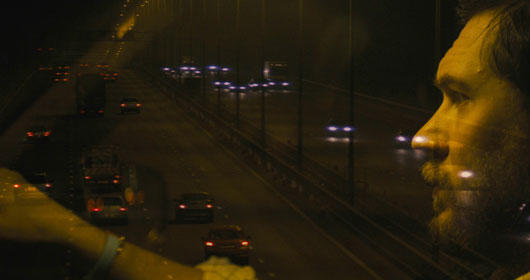 Can the merits of a man become unhinged by one moral misstep? In Steven Knight’s Locke, protagonist Ivan Locke’s (Tom Hardy) fate teeters on that overloaded question.

Director Knight’s latest effort is one of assured minimalism and stripped down artistry, featuring Tom Hardy in a role without the cinematic safety nets offered in his prior films. Hardy plays the titular Locke, a man of the highest moral esteem and a construction foreman with a wife and two children. But on this night, which also happens to be the eve of the most important day of his career, Locke faces the fallouts of a past mistake that may irrevocably haunt him.

Shot entirely in and around the confines of Ivan Locke’s BMW, our protagonist’s vulnerable condition is dictated to us through a series of Bluetooth phone calls with bosses, colleagues, wives, children, and one mysterious woman. Ultimately, Locke’s pillar of integrity is revealed to have one severe fracture, and he must choose to act in the interest of self-preservation or the interest of everyone but himself. Director Steven Knight recently spoke with us on the fascinating logistical challenges presented by the film and how he secured some of the UK’s best talents for less than glamorous roles.

Locke screened in the Spotlight section of the 2014 Sundance Film Festival. The film opens in theaters Friday, April 25.

With a film like this one there is an intimacy with the lead character that the viewer must engage with in order for the idea to succeed. Despite his transgression (which we won’t disclose here),  Ivan Locke is easy to sympathize with because he is by all other accounts a man of integrity. Can you talk about that dichotomy at play?

The original thought was that I wanted to create a really ordinary person. He’s married, he’s got two kids, he works in construction. He doesn’t have a backstory that involves prison or murder or anything like that. This is an ordinary tragedy–it’s something that could happen to anyone. I wanted something that an ordinary man may do that would have huge consequence on his life but that’s not gonna’ get him in prison, it’s not fraud or a crime. It’s a simple mistake, and we see how he responds to that when his life begins to unravel.

I admired the veracity in the film. I kept waiting for the scene where–

Yes!  And it never came, which was pleasant. In writing the script, did you have to check yourself often to not compromise authenticity?

I really didn’t want the car to crash or the baby to die. I wanted to keep it real so that an audience would recognize that this is something that happens in life and do the story justice. It’s shot in a certain way that in the end of the film when you pull away and you see all these other cars and you think, “Well in each one of those bubbles of light there’s another story.” Everybody’s living through these things and we all have these dramas. Isn’t that what film should be made about as well as well as all the other stuff?

How do you cast for a role that won’t appear on screen?

We just got so lucky. We decided to go for the best first, because you always do.

As was the case with Tom Hardy…

Exactly. This was one of those projects–and there’s no explanation for it–where everything came together. Every door flew open. With the cast, they’re not so well known over here, but they’re pretty much the best the UK has to offer in character actors. And what were we offering? They were going to sit in a hotel conference room from 9 p.m. ‘til 4 a.m. with just some biscuits and some red wine and not be seen. And they all bought into it.

It was a mere two weeks that you spent shooting, correct? And I believe you mentioned how that affected the film; it was conducive to the stripped down approach to the script itself.

The way we shot it, was to shoot it from beginning to end. The calls are real, the time is real, and Tom can calibrate his own performance because it’s actually happening. What that meant was that once we had shot the whole film 16 times, that was it. That’s all you can get inside that car. When it’s such a short shoot, there’s a fizz of excitement that lasts all the way through. It doesn’t die out.

In retrospect, the subplot playing out with the construciton job crisis definitely feels figurative, but it’s never heavy handed. Why did you choose that as the parallel storyline?

I wanted to go quite heavy on that because people are afraid of it, I think. But only where it’s offered to you. He works in concrete, and concrete is this solid, formless thing. That is Ivan. He believes in solidity, he believes in practical solutions. Just like John Locke the philosopher, which is the reason I chose the name. Locke was a rationalist, he also believed in the separation of the self. Ivan makes his own decision and sticks to it. So yeah, the metaphor is deliberately there.