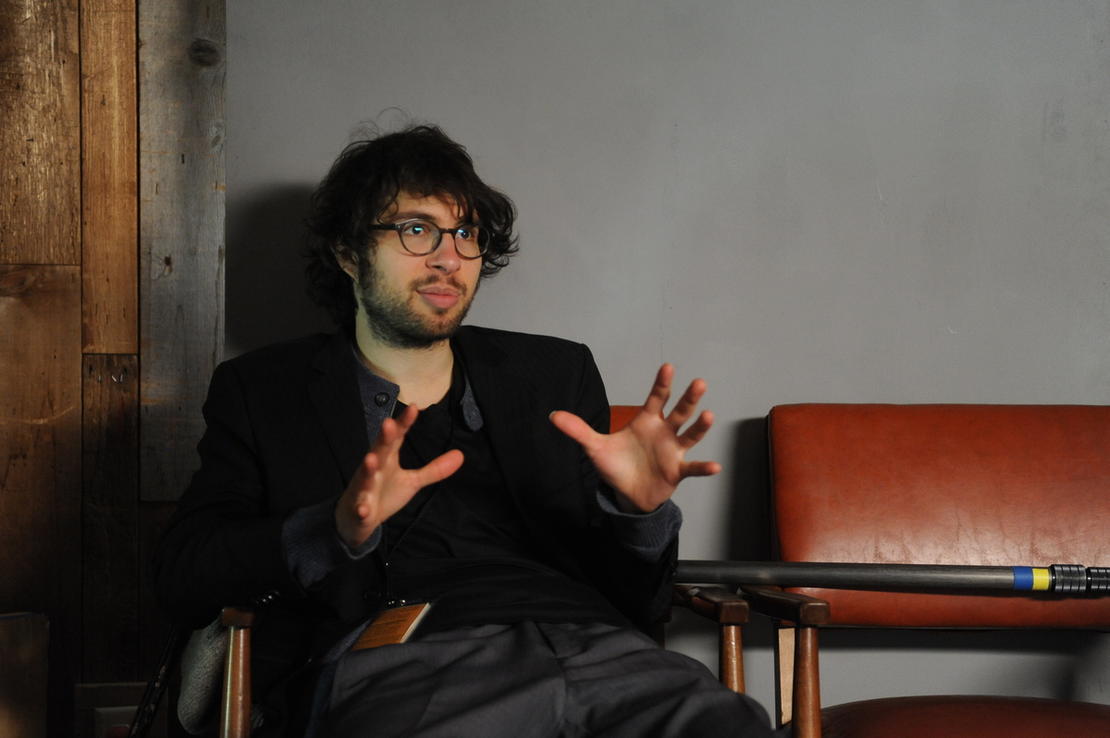 Carlo Mirabella-Davis on the set of the 2011 Directors Lab. Photo by Fred Hayes.

Writer/director Carlo Mirabella-Davis participated in our 2011 Directors Lab with his project The Storm King. Each fellow has the opportunity to rehearse, shoot and edit selected scenes from his or her screenplay in a workshop environment, where the focus is completely on creative exploration and discovery. Below, Carlo chronicles his experience at Sundance and discusses the magic of this storytellers community.

If filmmaking is my religious denomination, then the Sundance Institute is our Westminster Abbey. Nestled in the craw of a Utah mountain range, every corner of this place exudes an arcane, electromagnetic romance. A pitch perfect hum. Yesterday, I took a ride on the ski lift with a fellow Fellow, the brilliant and talented Liliana Greenfield-Sanders. I soon found myself sky high, dangling off a rickety metal seat, suspended across a treacherous mountain face.

As multi-phobic, hypoglycemic New Yorkers, Lily and I were utterly petrified, fervently bargaining with God. I was convinced the lift would dislodge and we’d be crushed like beer cans on the jagged rocks below. Squinting, I scanned the undergrowth for the bleached bones of previous directing fellows.

We desperately tried to make peace with our imminent demise. “Well… at least we made some good short films,” Lily pointed out. “True, true… and I spent a lot of time indoors. Watching movies and raising chickens. Which is definitely a life well spent.”

As we neared the summit, I realized that making stuff was profoundly important to me. Telling stories. Crafting film. Carving motion pictures. And here I was, at a workshop, an enclave, a sanctuary completely devoted to story and storytellers. Perfect. Profound. But why do we perform, write, edit, film, photograph, paint, conjure, imagine, sing, contort, and regurgitate reality?

Imagine the thrill and terror of the first Homo sapiens. Cowering from a murderous sky, only scraps of words to communicate hunger, loss, and overwhelming alienation. How rare and unique it must have been to be human then. The odd species out. Freaks of nature.

But after the hunt, to dip your hand in crimson dye and mark the wall of your murmuring cave. Streaking out the symmetry of that thundering herd animal. Your brother, a few lines in jagged succession, you with a spear, the wooly mammoth, downed. Gasping, heaving blasts of hot air. And there, on the wall, the hunt preserved in pictures. It must have only made sense on the wall. Upon reflection. Through the lens of rock.

Scientists are experimenting with teaching robots to tell stories in order to make them more lifelike. It’s called N.I. or Narrative intelligence. Diane Ackerman calls the human brain a “pattern-mad supposing machine.” We tell our children stories to help them sleep. We write our futures before they happen.

Creating an organization like Sundance Institute which exists solely for the cause and craft of the storyteller is not only a revolutionary act, it’s a deep evolutionary imperative. Needless to say, Lily and I made it back to earth bathed in sweat, vowing to shoot more film and never set foot on a ski lift again.