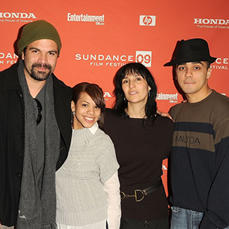 What, exactly, is a Sundance Lab movie? People sometimes talk about Lab films as if they constitute a genre — like they’re all romantic comedies or horror films — or share some stylistic agenda, narrative pattern, or set of themes. Insiders flatly reject that idea.

“I hope that there’s no such thing as a ‘Lab movie’ because, to me, that connotes a sense of sameness,” says Michelle Satter, Founding Director of the Sundance Institute Feature Film Program. Satter oversees the year-long series of workshops that begins in January with the Screenwriters Lab, where screenwriters meet for an intensive five-day session with advisors and colleagues to develop their scripts. The series continues in June with the three-week Directors Lab, a sort of filmmaking boot camp in which directors work closely with Advisors to rehearse, shoot, and edit several key scenes from their films. The Directors Lab is then followed by a second Screenwriters Lab.

Next comes the Film Composers Lab, in which composers are paired with filmmakers to craft compositions for specific films. The Independent Producers Conference, held at the end of July, gives participants a snapshot of the independent film industry’s business side, while the Theatre Lab gives playwrights an opportunity to rehearse scenes and work on crafting a play. In addition, there are more Labs yearly for documentary filmmakers as well as filmmakers outside the U.S. In all of the Labs, participants work in small groups with Creative Advisors. The goal is always to help artists realize the full potential of a project.

“What I think distinguishes these projects is the diversity, both in the stories and in the genres,” Satter continues. “The common thread is the authenticity of voice and a singular vision, but these are projects from all over the world by filmmakers with very different perspectives.”

Films that received Lab assistance screening at the Festival this year confirm Satter’s claim. Ranging from Cary Fukunaga’s Sin Nombre, a fast-paced thriller set on a moving train in Mexico; to Najwa Najjar’s Pomegranates & Myrrh, a conflicted personal drama of a woman whose husband is imprisoned in Ramallah; to the unusual coming-of-age story at the center of Victoria Day, directed by short story writer David Bezmozgis; the 10 films that received support from the Sundance Labs are as wildly eclectic as the filmmakers and their journeys to the Festival.

Cruz Angeles and Maria Topete, who began working with Sundance Institute at the 2005 Screenwriters Lab with Don’t Let Me Drown, about a troubled romance inflected by the events of September 11, offer just one example of the kind of transformative support the Labs can offer.

“It was so incredibly valuable to work with established writers like Walter Mosley because they bring up points that you’d never think about,” Topete says.

“For me,” adds Angeles, who attended the Directors Lab the following June, “the most important thing was that while film school was a competitive environment that didn’t allow me to grow as an artist, the Lab was the opposite. In the end, the support and nurturing allowed me to evolve, and later it was like having a little angel watching my back.”

Angeles and Topote’s empathic portrait of young lovers contrasts vividly with Cold Souls, written and directed by Sophie Barthes, who attended the 2007 Sundance Directors Lab. Her wry story stars Paul Giamatti as himself, an actor struggling with how best to play the part of Uncle Vanya. He finds a very curious solution to his overwrought interpretation, which in turn triggers a soul-searching journey. While Don’t Let Me Drown finds gritty poetry in the slang of its two urban lovers and a visual style that underscores both the beauty and harshness of the city, Cold Souls is often visually spare and elegant, perfectly capturing the smooth, rounded edges of a world untroubled by angst.

International films also benefit from the Sundance Labs. Zion and His Brother, directed by Eran Merav, takes us to the streets of Haifa, Israel for a story about fraternal allegiance in a world that threatens it at every turn. Tibet in Song, directed by Ngawang Choephel; Kimjongilia, directed by N.C. Heiken; and El General, directed by Natalia Almada, all benefited from the Institute’s Documentary Film Program, receiving financial and creative support. Amreeka, directed by Cherien Dabis, and Pomegranates & Myrrh, both illustrating the hardships faced by those living in the Palestinian Territories, were supported through the 2005 Middle Eastern Lab.

In answer to another longstanding rumor — that Lab films automatically screen at the Festival — John Cooper, Director of Festival Programming, quickly dismisses the notion.

“We treat Lab films like every other film,” he explains. “They must go through the same vetting process. If anything, there are moments when I fear we judge them more critically. That said, it stands to reason that a good deal of films that go through the Sundance Labs would make it into many festivals because they were vetted so rigorously on story and originality in their early stages of development.”

Cooper’s assertion is again supported by this year’s eclectic Lab projects, which demonstrate tight storytelling and originality, and enhance the breadth of stories throughout the Festival.