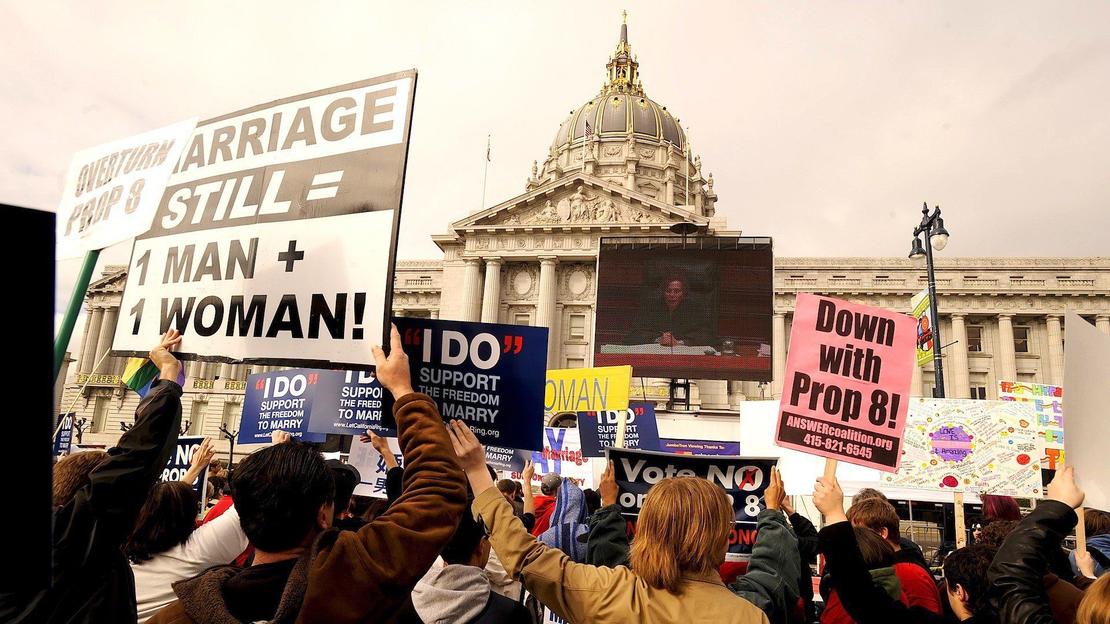 A still from ‘8: The Mormon Proposition,’ a doc that premiered at the Sundance Film Festival.

A federal appeals court ruled on Tuesday that the voter-approved ban on same-sex marriage in California is unconstitutional. In light of today’s decision, we revisit a documentary most pertinent to the issue of equal marriage rights, particularly the passing of Prop 8 in California. Reed Cowan and Steven Greenstreet’s “8: The Mormon Proposition” premiered at the 2010 Sundance Film Festival.

There’s something undeniably powerful about documentaries and their ability to deliver a message topical, emotional, political, and personal. And make me weep like you wouldn’t believe.

Yesterday I met up with my friend Channing — who happened to be in town for the Festival — to see 8: The Mormon Proposition. Channing has roots here in Utah, and was eager to see this film in particular. We waited together in the snaking ticket line to enter the Racquet Club Theater.

Other people in the line were already discussing the topics addressed by the film: separation of church and state, civil unions, the meaning of marriage. The crowd already seemed to be largely on the side of the filmmakers, but as director Reed Cowan mentioned in his introduction once we were inside, he’s not immature enough to think that the entire audience agreed with him. Producer Steven Greenstreet made a statement as well, and was overcome with emotion before the film had even begun. I figured right about then that I was in for a bit of an emotional rollercoaster.

Hoo, boy. They started early, the tears. I handed Channing a napkin from the coffee concession stand outside the theater and kept two for myself. Throughout the movie, you could hear the sobs echoing from different corners of the cinema. This film, or its message at least, certainly had an affect on so many who were there.

At the Q&A, the directors echoed what they’d said in their introduction: “every life has a story, every story has a lesson.” They had mentioned before the film that they welcomed the disbelievers and wanted us to be united in dialogue, and that taking part in the dialogue is what’s most essential.

A questioner asked what legal options we have to reverse what’s happened in California and Maine. San Francisco Mayor Gavin Newsom — who was present in support of the film — was invited to the mic to address this question. He said that like a good politician, instead of answering the question directly, he would instead borrow the words of Dr. Martin Luther King, Jr.: “the arc of the universe is long, but it bends back towards justice.”

I said goodbye to Channing, who was as shaken as I was, and left the theater weak from trying to stifle my own emotion. I was unsure of how I could process what I’d just seen into words. Rather than try to turn the emotions into more words than I can handle in one little blog post, I’ll just say this: the emotional impact of these films is measurable and immense, if my wobbly knees and multiple trips out of the office to have a good cry in the snow are evidence enough.