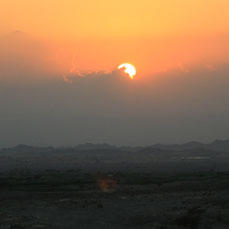 The Jordanian desert hills, a storybook setting in itself, provides a perfect backdrop for storytellers to gather. The RAWI Middle East Screenwriters Lab took place earlier this month in Jordan. The lab is an initiative of the Royal Film Commission of Jordan, and this year, one of the fellows is Haifaa Al-Mansour.

Al-Mansour is the first woman filmmaker in Saudi Arabia, and her project Wajda follows the story of a young girl who tries to break free of societal obstacles to pursue her own dreams. Haifaa talked about her role as a history maker and storyteller and her plans to revisit the third act of her script following the intensive lab experience.

Where did you grow up? What does it mean to be the first woman filmmaker from Saudi Arabia?

I grew up in a small town on the east coast of Saudi Arabia. I don’t want to make it sound like we were totally isolated from the outside world, but we weren’t exactly jet-setting around. All of my young life was centered around our town. The concept of the big world ended at the cities a few hours away.

I always read books and watched films and wanted to be a part of the bigger world though. Saudi Arabia is a country without movie theaters and bans cinema, but my father made film accessible to us and we had family nights where we would all watch films together.

I loved films so much, but I never thought I would be a filmmaker, let alone the first female filmmaker in Saudi Arabia. I’m proud to make history, but my dream is to be known more for the quality of my work. I’m working on honing my skills and hoping to earn the reputation of a filmmaker with passion, vision, and a distinctive style.

How does this “first female filmmaker” influence your filmmaking and how you tell stories?

The title carries a lot of political implications, regarding the status of women in the country and all of that. Since I broke a boundary, or at least people believe I did, I hope to live up to that and make memorable films that matter and have an impact on the way people view the world. I aspire to make films that celebrate life and encourage people in my country to be more tolerant. I also want to provide a window for the world to my culture. Nonetheless, I have no intention of sacrificing the entertainment aspect of storytelling for a political message. I always thought the balance between entertaining the audience and engaging them intellectually is what makes a film stand out.

How did you arrive at the idea for your screenplay for Wajda?

I think the conflict between modernity and the traditional, conservative values in Saudi is a very interesting topic, especially in the emerging youth culture. Putting that in mind, I tried to create a character of a young person who is full of joy, love, and laughter, and who wants to fully embrace life but finds herself dealing with conservative forces that go against all that.

Talk about your experience at the Screenwriters Lab in Jordan.

It really helped me see the potential of my script and work through a lot of issues. It sparked a lot of ideas in me and inspired me to work through some of the tougher structural concerns I had, particularly in terms of the tone and pacing of the story.

Before the lab, I knew I had a problem with the structure, as I wasn’t able to bring the third act together, particularly in terms of hitting the right dramatic points at the right time. The advisers confirmed my concerns, and helped me see that the third act didn’t fit in with the tone of the overall story. It appeared as a functionality to end the protagonist’s struggle. I started to pay attention to the rhythm of my story and came up with an ending that flowed more naturally out of the previous acts.

The advisers also directed my attention to how the subtext of the script could help me find the tone and add emotional complexity and depth to the plot. It wasn’t easy for me to take in all of the advice I received at first. It took me a while to figure out how to show the theme of the story in a subtle and profound way without actually stating it.

The lab helped me see how the subtext is embedded in every detail. Even the characters’ actions should be colored by the undercurrent themes to achieve an effective emotional arc. It ‘ hard!

What was it like working so closely with a group of Middle Eastern filmmakers in Jordan?

Being set in the Arab world, it made me feel like I’m a part of the new generation of Arab filmmakers who are changing the face of Middle Eastern cinema. Every one of them is full of energy and there is a great sense of excitement. Every one of them has something to say about where they came from and where they are heading to. The serenity of the surroundings really gave me time to think. Jordan is such a friendly country, and at peace with all its neighbors. It has a sense of calmness and tranquility that’s rarely felt in other Arab countries.

How are you thinking differently about your screenplay now?

I’m changing the whole third act! Writing is such an emotionally straining process, because, as a writer, you want to give your characters the lines they deserve and actions that truly reveal who they are. Sometimes a writer is too close to his or her characters and having someone else with experience read it, and point out what is working and what is not, is really priceless.

What’s next for you and your first feature film?

My plan at the moment is to explore the full potential of the script. I feel like getting a good working draft will be a real milestone. Then I’ll shift my efforts into finalizing co-production deals and moving into pre-production.