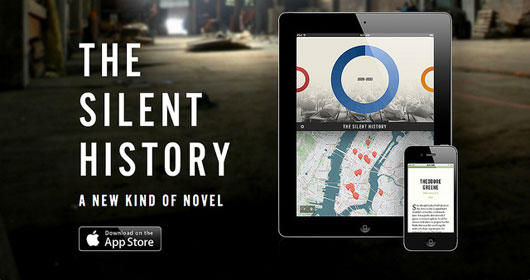 I remember taking a walking tour of Berlin many years ago, where the guide stopped every 10 meters to share a new and dramatic story about the surrounding space. The experience climaxed in the middle of an old city square, where she revealed layers of history: the Cold War, the Third Reich, World War I, Prussian aristocracy, even 9th Century Slavs. I visualized the atoms in my feet vibrating with the atoms of that well-trodden ground. It gave me a visceral feeling of connectedness, because those same atoms vibrated with those of history’s heroes, villains, and commoners — those who stood and died on that same spot.

There have always been metaphysical geo-caches left by history that vibrate with us when we walk in real space; some more powerful than others, some true and some conjured by our imagination. Now technology allows us to decode those geo-caches in incredible ways: mobile devices give us access to information, content and virtual experiences based on our GPS location, augmented reality apps are triggered by specific architecture, and Google Glass allows one eye to see the world through a transparent virtual lens. These are just a few ways new technology lets us peak into other dimensions of a real space.

At the Sundance Institute’s New Frontier Story Lab we ask the question: How will storytellers leverage this technology to tell great stories?  At the 2012 Lab, two Fellows sought to answer that question with The Silent History.

Eli Horowitz and Russell Quinn brought this very compelling serialized novel, designed exclusively for iPads and iPhones, to the New Frontier Story Lab to explore how it would drive readers to GPS locations around the country and give them a new experience of story. Their goal was not only to layer the narrative over real architecture and landscapes, but to allow others to do the same by generating Field Reports that expand the story and further integrate it with that unique place.

The novel tells the story of a generation of children born silent, who are pushed to the margins by society’s unfounded fears.  Through testimonials of characters in the story and Field Reports by the novel’s readers, we peer into the mysterious community of Silents and are surprised by what we find.

Excerpt of a Testimonial:

“I remember one time Becca and I were at the store, both trailing Mom. Becca was ignoring me, keeping her head down. Becca at the grocery store wasn’t the same Becca. I’d heard Mom talking to Dad earlier about how she was having a hard time in her class at school and how she’d started to, in general, withdraw — I had to ask what withdraw meant. They said take away. Each time we went to the grocery store, more people had started to notice Becca and comment to our mom about her. Maybe they were more aware of silent kids, or maybe Becca was more noticeable. The time I’m remembering, just as we were going into the store, an elderly woman said, “I’m so sorry,” when she saw Becca. “For what?” our mom asked. “Oh, I shouldn’t have said anything,” she said before scooting off. “I’m starting to hate people who mean well,” our mom said. After we were done shopping the woman behind us in the checkout line started talking to my mom, telling her how pretty both her daughters were, and so on. The woman looked at Becca and said, “Wouldn’t it be incredible if she just snapped out of it one day?” “What do you mean, snapped out of it?” my mom asked. “Like, what if a doctor figured out a word or a method that would unhypnotize them? Wouldn’t that be amazing?” “You should stop thinking out loud,” my mother said. Yelled. Everything sort of stopped. The cashier clenched a bunch of trembling grapes. It was the first time I’d ever heard my mom yell. It wasn’t the last.”

Description of a Field Report:

“The Field Reports are short, site-specific accounts that deepen and expand the central narrative, written and edited in collaboration with the readers of the Testimonials. To access and comprehend a Field Report, the reader must be physically present in the location where the Report is set. Reports are deeply entwined with the particularities of their specific physical environments — the stains on the sidewalk, the view between the branches, a strangely ornate bannister, etc. — so that the text and the actual setting support and enhance each other.” (silenthistory.com)

Ironically, their initial motivation to create The Silent History came from a love of book art and a disappointment with its slow demise as Kindles and Nooks started taking over hard copy publishing. In trying to bring the lost aesthetics of reading tangible books to the digital age, they actually innovated the experience of reading so we are even more immersed in the tangible. For example, when you stand in Grand Central Station you can unlock a geo-cache of the narrative that references the building’s specific architecture; you can almost feel the presence of a colony of Silents living in its catacombs.

Since coming to the New Frontier Story Lab, The Silent History completed a six-month daily serialization of the narrative, drove devoted readers around the country to the places where its plot unfolds and earned critical acclaim as a “revolutionary” way to tell (co-create) great stories with geo-locative technology.