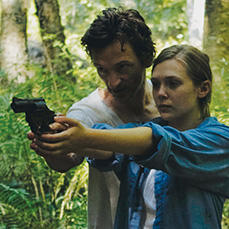 From the way Hollywood deals with matters of faith, you’d think it was a closed case. Either belief is passively assumed, an unchallenged fact of existence—think of all those hackneyed, string-scored, skyward-glancing, safely vague happy endings—or it’s something to be feared and vilified. In other words: inspirational treacle or horror. But the truth is that for most people, including many who believe, faith is far from settled. It’s fluid, evolving, something to be grappled with and questioned.

Clearly diverging from the industry norm, three features in this year’s Festival interrogate the complexities of faith. In these films, belief isn’t simply good or bad for individual people, but an essential, and often difficult, aspect of being human. In Higher Ground, the directorial debut of Academy Award–nominated actress Vera Farmiga, a woman is led to a life of Christian belief but finds herself wrestling with doubts and the expectations of her church.

In The Redemption of General Butt Naked, a documentary by Eric Strauss and Daniele Anastasion, a former warlord who claims to have killed thousands of his countrymen during the Liberian civil war converts to Christianity and tries to atone for the lives he’s destroyed. In Martha Marcy May Marlene, a debut film by Sean Durkin, a young woman escapes from a criminal cult only to find herself confused and ambivalent about returning to the outside world.

“Everyone’s looking for an answer to questions,” Durkin says. “Looking for a larger purpose for themselves, for the earth, for existence. It goes from the smallest to the largest idea.” All three films reflect this universality, depicting singular spiritual journeys that echo with larger, irresolvable queries of being.

To Thine Own Self Be True

What happens when you start to doubt what you’re certain of? What happens when leaning about yourself leads you astray from who you thought you were? In Higher Ground, based on This Dark World: A Memoir of Salvation Lost and Found by Carolyn Briggs, Corinne, after marrying and having a child at a very young age, finally comes into her own as a practicing Christian. It’s how she finds a greater purpose and community, as well as confidence in herself as a leader and thinker.

But those thoughts—about God, sex, and justice—eventually stray further afield than her congregation is willing to accept: her personal journey starts splitting from her spiritual one. At heart, says Farmiga, “It’s a coming-of-age story. How Corinne becomes a woman physically, emotionally, sexually, and spiritually.” Though Corinne struggles to reconcile all those ways of becoming—particularly since an inflexible patriarchy rules both home and church—it’s never a matter of simple incompatibility. She finds hardship on her path, but also real joy and fellowship.

According to Farmiga, it was important to maintain both sides of Corinne’s truth, exploring both her “great faith, and the great doubt that comes along with it.” Since she challenged herself to direct as well as act in the film, it’s unsurprising that she was drawn to Corinne’s moment of becoming. Yet she was also able to identify with her protagonist’s unresolved frustrations, with spiritual yearnings that persist despite the failures of religion and society. “As a community we’ve lost faith in government, politics, pastors, you name it,” she says. “We all feel out of control.” Higher Ground neither promotes faith nor condemns it, but rather aims to serve as a clear-eyed reflection of why people both find and lose their way through spiritual quests.

Redemption to the Extreme

We all know the story: A man commits great misdeeds but comes to see the error of his ways, for which he seeks forgiveness and redemption. It’s the classic Christian conversion story, serving as the basis of many, if not most, narratives of Western history. It’s all about the turnaround, the comeback, the bad guy Terminator turned civilization-saving good guy, and the bigger a man’s turnaround the better. But if there were ever a story to challenge these notions, to suggest that some pits might be too deep to climb out of, it’s The Redemption of General Butt Naked.

When we first meet Joshua Milton Blahyi, he’s a committed, charismatic preacher. But then we learn his back-story. Joshua used to go by the name of General Butt Naked, and he used to lead a child army of naked, cutlass-wielding warriors who murdered thousands upon thousands of Liberians in the early 90s. Then, like Saint Paul, who switched from Christian-murdering Saul to the main architect of Christianity, Joshua saw the light, and has been trying to atone for his sins ever since. But as co-director Strauss points out, “It’s a lot easier to accept when you’re reading about something that may have happened 2,000 plus years ago,” rather than encountering actual, living victims, or watching still recent video recordings of homicide and mutilation.

As directors Strauss and Anastasion discovered over several years of filming, Blahyi is a divisive figure in Liberia. Some want justice for his many crimes (he remains a free man), while others appreciate his contrition and candor—unlike many of his fellow fighters, he spoke openly about his actions before the Truth and Reconciliation Committee—and see him as a positive force for the future of the country. Others are overwhelmed with emotion at the sight of this onetime monster as a simple man asking for forgiveness. “I honestly don’t know that I could forgive if this were done to a family member of mine,” says Anastasion. “It makes the victims who appear in the film equally as fascinating as he is.”

Both Strauss and Anastasion describe how their opinions of Blahyi see-sawed over the course of shooting and editing the film, from sympathy to horror and back, and sometimes within a single sequence. Neither doubted the sincerity of Joshua’s beliefs (“something happened for him in the midst of this war,” says Strauss, “and it was an issue of faith”), but it wasn’t easy to accept his present incarnation in light of the immensity of his crimes. “It’s really hard to know what’s in somebody’s heart,” Anastasion says. “Even if you go through the motions, and you follow through on actions that would seem to suggest that you’re genuine, at the end of the day it’s really difficult to tell what someone’s actually feeling.”

Rather than forward any kind of conclusion, the directors hope audiences will ponder and debate these issues long after the film has ended. “We wrestle with issues of faith just like anybody else,” Anastasion says. “We want viewers to be able to look at the story and say, ‘Is this enough for me? How far does he have to go?’” The story of General Butt Naked interrogates some of the deepest notions of society, asking us to weigh, and then re-weigh over and over again, a man’s heart against his actions, his present against his past, a new beginning against calls for justice.

On the Other Side, But Still In Between

In Martha Marcy May Marlene, there’s little doubt that the twentysomething protagonist (Elizabeth Olsen, who at various times goes by each of the names in the title) is safer and saner outside of the cult-like community from which she’s escaped. But director Durkin was intrigued by what a person would feel during the first few weeks removed from such a situation, when a person hasn’t been deprogrammed, hasn’t stopped wanting what drew them to the community in the first place, hasn’t come to reaccept the imperfections of the outside world.

“Someone I’d interviewed told me that when she came out, she knew what happened was wrong but couldn’t feel that it was wrong,” Durkin says, and as a filmmaker he mines that feeling—or rather that lack of feeling—to bring viewers into a subjective zone of conflicting beliefs and assumptions. What seems right (a safe environment, a loving family) feels wrong, and what’s wrong (a manipulative and abusive cult leader, a dangerous alternate morality) still feels right. But the experience can’t entirely be blamed on inverted perceptions. On some level, there’s truth in how she sees things, and in how the cult had originally identified what she was missing in her life.

“The way that these groups get people is there is truth to it,” says Durkin. “They’re finding a void in somebody and filling it with a truth. Then once that truth makes sense, they manipulate it a step further and a step further. And before you know it you’ve rewritten yourself.” Un-writing oneself after such an experience can be a daunting and painful task, especially if there are aspects of the experience that one still longs for. The community in Durkin’s film is comprised of young, attractive, intelligent idealists who maintain a self-sustaining house and farm. Members have a purpose, and receive the kind of positive reinforcement that everyone craves. “I think there’s a desire in everyone, at some level, to sort of be able to drop out,” Durkin says. “There’s some basic human desire to just live a simpler, more in-the-moment life. Like any utopian idea, it’s got great principles but gets used in an abusive way.”

By contrast, the protagonist readjusts to the real world in the company of her older sister and new brother-in-law (played by Sarah Paulson and Hugh Dancy), a classically bourgeois couple whose lives feel a million miles away from the warped utopia she so recently knew. Durkin uses a parallel structure to alternate between hazy present and warped past, ultimately exposing the horrors of the latter while still complicating the former. Answering one question often just begets another. She’s destined to wrestle with what to believe, who to be and how to live. Which, despite the particulars of her situation, puts her alongside characters in Higher Ground and The Redemption of General Butt Naked as flawed, conflicted searchers.

None of the films flinch from the spiritual aspects of their stories, and never falsely uplift us past conflict or doubt. Yet what Eric Strauss says about his documentary holds for the fiction features of Durkin and Farmiga. “These aren’t only issues of faith,” he says. “These are human issues.”