The New War Documentaries: 3 Films About the Human Cost of War 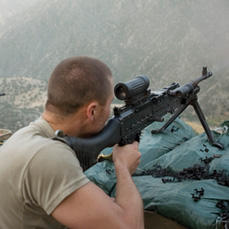 A still from Sebastian Junger and Tim Hetherington’s ‘Restrepo.’

Three documentaries in this year’s Festival approach America’s overseas conflicts from very different angles, yet at heart they are all stories about the human costs of war. For all their differences, these three films—Sebastian Junger and Tim Hetherington’s Restrepo, Amir Bar-Lev’s The Tillman Story and Laura Poitras’s The Oath—represent an evolution of the contemporary war documentary.

Eight years after the beginning of the conflict in Afghanistan and nearly seven years after the invasion of Iraq, none of these films concern themselves with questions over the wisdom or justifications for these missions, and instead focus on the complex realities of what’s happened since. If modern war remains an abstract concept to many Americans—battles are fought overseas and media coverage is now only a fraction of what it was when the current conflicts began—these documentaries are powerful correctives, reaching out to American audiences through deeply intimate, universally relatable narratives.

Each combines a dogged pursuit of documentary veracity with classic storytelling, marshalling the forces of drama and character to make compelling, engaging films. These are three films for our time, but like the notions of conflict, struggle, and resilience that they explore, they are also timeless. Beneath their reportage and verité footage are thoughtful inquiries into cultural mythologies that continue to influence the ways in which we view and interpret the world.

In some ways Restrepo couldn’t be more circumscribed. About one platoon filmed over a single year in a single, singularly violent valley in Afghanistan, the film would seem to be an unlikely vessel for discussions of universality. But by shearing away all extraneous information and tightly focusing on the day-to-day, hour-by-hour struggle of American soldiers in the Korengal Valley, directors Tim Hetherington and Sebastian Junger arrive at a document of pure experience, thrusting the viewer into an unrelenting battle for survival and sanity.

“We wanted the camera to be a surrogate for the viewer,” says Junger. “As if the viewer were there and were a soldier. So once you think of the movie in those terms, a lot of things fall by the wayside.” Junger and Hetherington not only decided against interviewing generals, politicians, and experts, they strictly limited their footage to men on the ground in the Korengal, offering the viewer no escape from the stark reality of combat. For young men engaged in a constant battle for survival, political context is literally beside the point.

Minus the handling of artillery, the filmmakers lived the life of solders. They bunked at a camp that received daily fire, endured ambushes and IED explosions, and suffered various injuries. By stubbornly returning to the most dangerous valley in Afghanistan, knowing full well the dangers that awaited them, veteran war correspondents Junger and Hetherington, making their first feature film, won the trust of habitually press-shy soldiers.

“By trip number two or three,” says Junger, “I think the guys just decided, ‘Okay, you guys aren’t going away.’” In turn, that trust and staying power affords audiences unprecedented access to men at war, and makes Restrepo a landmark in embedded filmmaking.

Although The Tillman Story investigates and retraces the events surrounding the death of Pat Tillman—he soldier and former professional football player who was killed by friendly fire while serving in Afghanistan in 2004—Amir Bar-Lev carries the somewhat familiar narrative much further. He focuses on the events that followed Tillman’s death, and the way the American government, media, and citizenry willfully elect fiction over fact when it comes to understanding war.

“The film ended up being equal parts who Pat Tillman was and who we as a society needed him to be,” says Bar-Lev. “From the moment he entered the public eye people claimed him.” The remarkable irony of The Tillman Story is how different Tillman the man was from the gung-ho poster-boy of the popular imagination. “There’s this image of Pat Tillman as a square-jawed paragon of moral certitude,” says Bar-Lev, “when in fact he was a seeker, a thinker, a complex guy who tried to challenge himself to see things from different points of view.”

By trying to set the record straight about Tillman’s death and interrogate his mythologized afterlife, Bar-Lev hopes to honor a man whose heroism is only enhanced by his complications. “When you get down to who he actually was and what he did, Pat was extremely heroic,” Bar-Lev says. “But not in any of the ways that the media or military would like you to believe.”

According to the U.S. military, Tillman was killed by enemy fire during an intense standoff. Given the fact that he gave up a million dollar football career to die a soldier’s death, Tillman was quickly painted as a martyr and made into a recruiting tool. But after pressure from the Tillman family, the military eventually admitted that Tillman was killed by friendly fire, and at close range. But they never admitted to what Bar-Lev and the family have determined was willful, opportunistic deceit. The mythology, as it happens, was scripted.

“It’s a story about truth-telling,” the director says, and in the film the Tillman family, led by Pat’s mother Marie and motivated by a no-nonsense belief in clarity, arise as dogged heroes in their own right. They want Tillman to be seen and understood for the complicated man that he was, and according to Bar-Lev, avoided telling on-camera anecdotes that could make Tillman seem larger than life. The conversion of the man into a symbol—a symbol incompatible with the truth of the man—proved doubly painful for those who loved him. “They lost him once to death and a second time to mythology,” Bar-Lev says.

The main character of Laura Poitras’s film is also a soldier, yet one of a very different stripe from Pat Tillman. When we first meet Abu Jandal in The Oath, he’s congenially chatting up passengers from the front seat of his taxicab. A man struggling to make ends meet and raise a young son, his sly smile and big personality make him an engaging screen presence. But gradually Poitras unravels the full truth of Abu Jandal: that he was a pledged member of Al Qaeda and that he loyally served as Osama bin Laden’s bodyguard.

“We were interested in taking the audience on that journey,” says Poitras. “Of understanding him one way in the beginning of the film and having that understanding unraveled as the film progresses.” Poitras’s strategy has both a dramatic purpose and a moral one. As with Bar-Lev and The Tillman Story, Poitras was interested in presenting the complexities of her character and of the world in which he lives. She alternates between Jandal’s story and that of his brother-in-law, Salim Hamdan, a man who was never a member of Al Qaeda but was nevertheless apprehended for his associations. He languishes in Guantánamo while Jandal moves about freely, if fearfully, in Yemen.

As she did with her last film, the Academy Award–nominated My Country, My Country, which tracked a doctor caught between resilience and resignation in occupied Iraq, Poitras brings a fearlessly attentive approach to tell the story of men snagged in the net of America’s foreign entanglements post-9/11.

“Abu Jandal and Salim Hamdan kind of walk us through the history of the last nine years,” Poitras says. “From within this family dynamic you can understand an extraordinary amount about 9/11, Al Qaeda, interrogation techniques, Guantánamo, and the suspension of law.”

The emotions stirred by The Oath are bound to be strong and conflicting. The more the audience learns of Abu Jandal, the more difficult it is to reconcile presentation with politics. Granted access to Jandal’s private life, watching him raise his son and discuss jihadism with impressionable young men, Poitras herself had to negotiate complicated feelings and impulses. With access came a journalistic imperative to push back at her subject more than she normally would.

“We didn’t want to just be a spokesperson,” she says. “We wanted to be clear that we had the reigns. It’s a delicate balance to keep the reigns but also let him be who he is, which is charismatic, and to let the audience be sucked into his character.”

In the end, Abu Jandal is one of the more fascinating characters ever presented by a documentary film. Rather than present audiences with an easy-to-root-for protagonist, she focuses on a person who’s hard to trust, believe, or dismiss.

“It’s an antihero film,” Poitras says. “It’s a trope that’s used in fiction cinema all the time, but not as often in documentary. He’s a classic bad guy.”

Like the filmmakers behind Restrepo and The Tillman Story, Poitras expresses a particular, and particularly important reality, through the language of classic narrative. “It’s tried-and-true storytelling,” she says. “For me, the most important goal is to make people feel.”