The Great Park City Heist: A Conversation with Matt Adams of Blast Theory 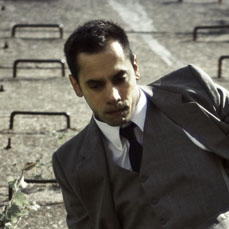 A Machine to See With

The 2011 edition of New Frontier has just been announced for the Sundance Film Festival, and it’s evident that Park City will be transformed. New Frontier, a quasi festival within the Festival, highlights work where film and art intersect, and offers a pilgrimage into a third dimension of cinema. One of the 2011 artists, Blast Theory, a Brighton-based group, have spent the last decade working in the field of mobile experiences. Blast Theory will present their new project A Machine to See With, where Festivalgoers will get the chance to enter into an alternative reality where you experience the scene of a robbery as you walk the streets of Park City with your cell phone. We recently caught up with Matt Adams of Blast Theory to discuss virtual mayhem.

Can you introduce the readers to Blast Theory?

We are a group of three artists, and a team of six total. We show our work internationally, usually in the context of galleries, museums, theaters, and festivals. We try to create new artworks that are interactive and often use hybrid space to be realized. We’ve been making games that are highly participatory and playful and look to make links between popular culture and social and political reality. We also attempt to combine a strong narrative with a structure that allows members of the public to interact on their own terms.

Artistically speaking how did you become interested in gaming?

We were always interested in making interactive work, and we only arrived at using computers as tools to enable that. We then stumbled into the structure of games and making virtual spaces. We realized that games are one of the baseline forms of interaction—they’re something that we all naturally understand. It became an open and embracing way of engaging with an audience.

At what point did you incorporate film into your tool set?

Film has always been an important part in the way that we make our work. One of the key members of our group in the 90s was a filmmaker himself so we had a very strong cinematic component. We moved into virtual spaces where there is still a cinematic grammar in some kind of way, and you are placing a camera in a virtual world and you’re giving it certain properties.

Can you describe A Machine to See With, the project you’re bringing to the 2011 Sundance Film Festival?

It’s a work where you book a screening, which starts every 15 minutes, and you hand over your cell phone number. On the day of the screening you get a call telling you where to be and at what time. At that given time your phone rings and a voice begins to talk to you. The voice guides you around the city as you explore various places and undertake a number of tasks. You do these quiet kinds of challenging things as you’re talked through a real-life heist movie which is focused around the robbery of a bank. We build up to this robbery, and then you deal with the aftermath of that robbery as the climax of the work.

Is the “screening” developed for any city, or is it specific to Park City?

It’s going to be mostly tailor-made for Park City. We’ve presented the work once in San Jose, and our original conception for the work was that it could be played in any city quite easily. But as we got closer to the work we found so many great things about making it very tailored to a specific location. Clearly San Jose in September is a very different proposition than Park City in January.

How do you imagine the contrast between this individual “isolated” experience and the bustle of the “communal” Festival experience to play out?

I think it will work brilliantly. The project is predicated on the idea that when you see someone walking on the street with a cell phone pressed to their ear, it’s just another member of the public going about their regular day. We’ve emphasized that you’re doing this secret mission and it’s quite a high adrenaline experience. You walk around the street feeling like you’re doing things that you really shouldn’t be doing, and the fact that the people around you are oblivious is a big part of the thrill.

All of your projects have a playful fun factor to them, but they also provoke serious thought about our current social and political worlds. What’s the importance of that dynamic in your work?

We try to make work that is very open and engaging. Cinema has this enormous breadth and openness in terms of how it draws you in, but then these deep and complex experiences can be had within that. The title of [A Machine to See With] comes from a Godard film, but it’s also a reference to the fact that this whole work is experienced by automated phone calls. The work in some ways is a comment on the way in which computers attempt to give us personal experiences through highly automated sets of procedures. The work has a fascination with how machines structure our experiences.

So much of your work addresses media saturation and yet you use media in your art. What is your relationship to media?

I suppose I can only answer that personally because it would be different for the others from Blast Theory. I would say it’s a relationship acutely aware of the limitations of technology and of the prices that are paid through the new technological developments, particularly around social interaction. In some ways these technologies are open, connecting, and democratizing. On the other hand, I find social networking very troubling, I have very mixed emotions about it. The work we are making attempts to bring those critiques into focus.

What are you looking forward to at the Festival?

I’m fascinated to experience Sundance and be in this very lively atmosphere. I’m very curious to see the spectrum of responses to our work from people who are both interested in interactive practice as well as people who are skeptical of the kind of work we’re making. I expect some people will find that the work we’re doing as being entirely disconnected from cinema, while others will see interesting connections and possibilities in the work we’re making.