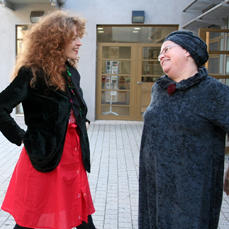 Outside the handful of cities with thriving film industries, there are cultural hot spots where artists are actively creating, but their locations may lack a formal support system for filmmaking. Take Tel Aviv: a complex history, rich culture, city blocks ripe with cafes, galleries, and shops. There is clearly an artistic pulse thumping through Tel Aviv, but like in many places there are also challenges to advancing the work of filmmakers who live there.

In a new venture to respond to the needs of these filmmakers, Sundance Institute’s Feature Film Program hosted a mini-lab in Tel Aviv this past March that brought together three Israeli fellows with creative advisors for three days to get down to work on their scripts. There was an additional day of workshopping with wider participants, including 23 Israeli filmmakers and other members of the Israeli film community.

“The mini-lab in Israel was a natural extension of Sundance Institute’s commitment to working with filmmakers from the Middle East, which we have been doing for the past seven years, both at the labs in Utah and at the RAWI Screenwriters Lab in Jordan,” says Sundance Institute’s Alesia Weston, who oversaw the Lab. “In partnership with Tel Aviv–based Philippa Kowarsky—who in addition to being a producer and sales agent is a tireless advocate of Israeli and Palestinian film—we expanded our support in Tel Aviv because it felt like the right moment to support these projects as well as recognize the flourishing of Israeli cinema on the world stage.”

Rama Burshstein, one of the lab fellows, has taught film at a girls’ school in her Orthodox community for many years as she raised her own family and worked on side film projects for women only. She had been invited to participate in other Sundance Institute Labs, but was unable to travel, so this new Lab in Tel Aviv was the perfect opportunity for her.

“I wrote my script four years ago, and you start to forget why you wrote it,” Burshstein says about her project Fill the Void. “There were things I overlooked because I had problems I didn’t know how to solve, and I was dealing with them in those [lab] days, and things got back into place.”

Burshstein finds inspiration from real life. Her script is about an Orthodox family whose young daughter is set to marry the widow of her sister even though she is in love with someone else. Burshstein first got the idea to write this story after she heard about a similar engagement between a young girl and a widower at a wedding she was attending in her own Orthodox community.

“I could not stop looking at the girl and wondering how could it be? How do you make that change? Was there love?” Burshstein ultimately landed on a love story about impossible inevitabilities.

Confronting such emotional subjects for Burshstein was made easier by the immediate bond between the Lab Fellows, who also included Hagar Ben Asher and Shira Geffen. Since the Lab, the women have formed a tight-knit group and have stayed in touch.

Asher describes the benefit of their new friendship as “having great partners just across the corner.” Asher has been working in film for the last 10 years in Tel Aviv as both an actor and director. Her script “The Slut” was first developed at the Residence du Festival de Cannes in 2008 and she has been revising ever since.

“I must admit, I have entered this journey being rather skeptical. I have been working on the script for two years and I am heading to shoot in two or three months. I am tired of sitting in front of words and papers.” But by the end of the intensive Lab, Asher found the labor to have paid off because of her interaction with the Creative Advisors—Hagai Levi, Ira Sachs, and Joan Tewkesbury. “They eventually brought me closer to myself,” she says.

Her script is quite controversial depicting topics of sexuality, religion, family, and abuse, and she is still absorbing all of the feedback she received at the Lab. “I am going to adjust accordingly,” she says of her current revision plans, but of her long term goals, “I will simply make a film.”

Leaving the Lab with a fresh eye has been the outcome that both Asher and Burshtein emphasized when reflecting on their experiences. Burshtein, who is currently in the middle of casting and plans to be shooting in three months, is pleased with her post-Lab perspective, “I’m beautifully refocused.”