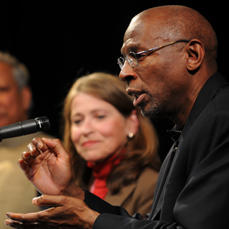 Even if you attended all 10 days of the 2010 Festival, 186 movies (even if 73 of them are shorts) is a lot of movies, and that doesn’t include everything else the Festival and Park City offer: the panels, the trippy, immersive New Frontier on Main installations, the parties, and the snow begging you to frolic in it.

There’s a way to not let the Festival’s wealth of culture overwhelm you, though: it’s entirely possible to make your own mini festival from the Festival at large. In a film festival that surrounds you with many ways to experience what’s going on in the world beyond just attending movie screenings, it’s easy to pick a topic and follow its thread throughout the Festival. The crowds won’t be any smaller in your mini-festival, and no one will make you a badge, but you can create a comforting mini-festival of your own nonetheless.

On Wednesday, about halfway through the Festival, the director of Waiting for Superman, Davis Guggenheim, opened the Q&A after his film by congratulating the audience for being so “hard-core” and staying beyond opening weekend to watch a documentary about education. But it’s no big surprise that both documentaries are packing them in past the Festival’s opening weekend: both movies are strangely thrilling and suspenseful about a subject usually found exciting only by policy wonks.

It’s a tragedy that the suspense, in both documentaries, hinges on whether the films’ subjects are selected to receive a good education. In Kenya, students in a small village who receive an excellent score on the national, pressure-cooker standardized test are eligible for a scholarship that would let them receive free middle- and high-school education before heading off to college (in Kenya, children whose families can’t pay the school directly can’t go to school, and in an impoverished nation such as Kenya, whether or not you get to attend school isn’t a fleeting concern).

The children in Waiting for Superman, in New York, L.A., and south of San Francisco, have parents who do all they can to get their children into charter schools that have a track record of sending an overwhelming number of their students to college (Guggenheim cites a statistic that only 20% of American students in public schools are performing at grade level). Because there are far more applicants for spaces in high-performing charter schools than there’s room for, there’s a lottery system in place for those spots; like Jennifer Arnold, Guggenheim profiles a handful of kids trying to get into good schools. Not all of them do.

One of the amazing things about Waiting for Superman is that it allows even die-hard liberals who have always supported unions an easy out when it comes to teachers’ unions (Guggenheim has a knack for reorienting our politics on a given issue—his previous documentary is An Inconvenient Truth). After his screening, Guggenheim said that he’s in a union, the Directors’ Guild of America, and thinks unions can protect workers. But as someone in the audience today pointed out, the DGA wouldn’t provide cover for Guggenheim if he was an incompetent director; it’s all too clear from Waiting for Superman that teachers’ unions protect bad teachers and make it possible for the large-scale, original ideas about transforming the American educational system to be squashed, dead-on-arrival.

It’s easy to feel depressed about the educational system, both in America and in Kenya, when there are intransigent and powerful institutions forbidding change. The more difficult task is to figure out what to do about it. One of the most encouraging results from A Small Act’s Festival premiere is the fact that at press time, $81,000 had been raised, partly from Sundance Institute Patrons Circle members and partly from Festivalgoers who got to see the film (to donate to Kenyan students via the trustworthy nonprofit profiled in A Small Act, text HBEF, a space after that, and the dollar amount you’d like to contribute to 27138 and you will be contacted the next day to arrange the contribution).

The Festival’s ironically titled Can’t Be Done! panel featured three “human tipping points,” as the panel’s moderator, Sally Osberg, called them, who have managed to effect big, transformative changes: Lester Brown, a leading environmentalist; Nobel Prize-winning Muhammad Yunus, who pioneered microfinance; and education reformer Geoffrey Canada, the creator of the Harlem Children’s Zone, which has raised students’ test scores in a 97-block area of Harlem. All of them had striking observations, but the topic of my mini-festival was education, so I confess I listened most closely to what Geoffrey Canada had to say.

Canada created an initial charter school in Harlem that, despite his critics’ opposition, raised students’ scores and helped them at every step along the way to eventually attend college (and most of his students come from families whose parents hadn’t been able to attend college). Just when you start feeling defeated about the possibility of change, someone like Canada, who is featured in Waiting for Superman, shows up at the Festival to tell you otherwise.

“There are a group of very talented young people who are studying everything we’ve written, everything we’ve said, and they’re going to improve on our work,” Canada said at the panel. “And I think that people are kind of trapped into what exists right now and forget that there is this creative genius out there of folks trying to say, ‘That was the old way, let me make this thing even better.’”