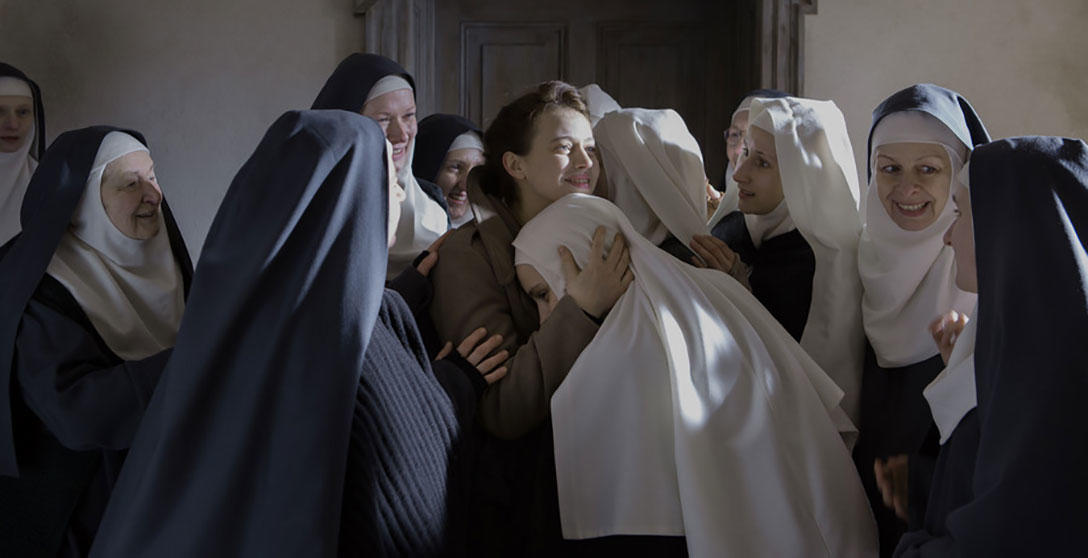 Sundance.org is dispatching its writers to daily screenings and events to capture the 10 days of festivities during the 2016 Sundance Film Festival in Park City, Utah. Check back each morning for roundups and insights into our experiences throughout the Festival.

Though it’s already day six, with the Festival more than halfway through, there are still films premiering in Park City. And so long as there are premieres, there are films that can sneak up on you. That’s what happened last night at the Eccles Theater during the screening of Agnus Dei. As the lights dimmed at the beginning of the movie, I heard a group of people groaning over the realization that Anne Fontaine’s follow-up to Adore would be subtitled. By the end, that same group of people leapt to their feet for a sustained standing ovation.

Based on true events, the film follows a young and beautiful French doctor, Mathilde (Lou de Laâge) working for the Red Cross in Poland during the months immediately following the cessation of WWII. One night a panicked nun entreats her to a convent for a medical emergency, and what she finds truly shocks her – a pregnant sister about to give birth. Soon she learns that there are others in the same condition, and no one else is on hand to reckon with their needs. Between the looming threat that the occupying Soviet army could return and violate them further, the culture of severe shame and secrecy that defines that convent, and the official work that she must return home for in the dark of night, Mathilde has her work cut out for her.

During the post-screening Q&A, Fontaine talked about the true-life, diaristic source material that served as the basis for a script by Sabrina Karine, Alice Vial, and Pascal Bonitzer. “It was from a diary of the French doctor – a very scientific diary. Very dry. No psychology. No romanticism. But the situation was incredible. I was so moved by it,” she said. Fontaine and the writers expanded this tightly focused material into a classic and emotionally exacting narrative. “I imagined who were these characters, which kind of relationships she had with the pregnant ladies. And I mixed two or three realities in different wars. This happened in Poland and it also happened at a convent in Vietnam. It’s not one story,” she said. “And today it’s the same situation in many countries. Even though it’s 1945 [in the movie], it hasn’t changed. [Rape], a weapon of war.”

But even if it’s a phenomenon that’s greater than this particular story, Fontaine still had to film in Poland to put this historical moment on the screen. Which proved to be a challenge, since she couldn’t speak the language. “To be a French director with a Polish crew – I thought I would go mad after one week. Imagine 30 actresses speaking Polish between themselves, and I couldn’t understand one word,” she said. “I had to be very controlled. And to have confidence. Even if I didn’t understand, I knew what I wrote.” Helping matters was that she was able to recruit some of the best actresses in the country, notably Agata Kulesza, unrecognizable in her severe nun’s habit from her indelible turn as the melancholic and sensual aunt in the Oscar-winning film Ida. “After a while I was okay with Poland,” she said, but still had one major complaint. “It was very cold.”

Maya Angelou: And Still I Rise

Maya Angelou: And Still I Rise, the first non-fiction look at the incredible life of the late author, poet, and civil rights activist from co-directors Rita Coburn Whack and Robert Hercules, was four years in the making and was greeted with a big pay-off following its premiere at the Marc Theatre Tuesday. A sold out crowd, including Dr. Angelou’s grandson, rose from its feet to offer a prolonged standing ovation and sustained applause.

The filmmaking pair revealed they began work on the film in 2012, two years before Angelou passed away and with her blessing and the maxim “you can do this film, but if you take it take it all the way.” The directors did just that with a revealing, unflinching portrait.

Besides an abundance of archival photos and incredible video footage (including Angelou’s early career as a singer-dancer) the filmmakers uncovered, they use new interviews with a number of powerful women she influenced, including Oprah Winfrey and Hillary Clinton, as well as former President Bill Clinton, who recalls the importance of the poem “On the Pulse of Morning” that he had Angelou write and recite at his first inauguration in 1993. “This poem will still be relevant 100 years from now,” he says. Angelou’s notable activism is given full coverage here, from her friendships with persuasive writers such as James Baldwin and work alongside important political figures, including Dr. Martin Luther King and Malcolm X.

Angelou herself provides the most candid reflections of her life, including events that inspired her seminal work I Know Why The Caged Bird Sings. She speaks frankly about being abandoned by her mother and being sent with her older brother to live with her grandmother in rural Arkansas. Here she was subjected to vicious racism, including a rape as a seven-year-old, a traumatic event that led to her decision to go not speak for a number of years. Of course, when she did decide to end her silence, her impact was almost incalculable.

After the film, Coburn Whack spoke to the authenticity of how Angelou evolved as a person and offered a lesson she’d learned from working on the film with her. “She really learned to love everybody and have a sincere compassion, even when people were unkind,” she told the audience. “She’d say to me ‘Don’t pick that up because you’ll have to put it down somewhere.’”

Angelou’s grandson Colin Johnson joined the filmmakers on stage and was at times overcome with emotion, but wanted to make it clear that this documentary “isn’t a eulogy. It’s a celebration of an amazing life.” The audience applauded again in agreement.

Equity, a suspenseful female-focused Wall Street drama, premiered Tuesday at the Library Theatre. The film depicts the cutthroat life an investment banker (Breaking Bad’s Anna Gunn) striving to a promotion at a controversial tech IPO while also grappling with an ambitious junior (Sarah Megan Thomas, also serving as one of the film’s producers) and an aggressive prosecutor (Orange Is the New Black’s Alysia Reiner) in post-financial crisis Manhattan.

Nearly three decades after Working Girl, Equity has received a lot of attention as one of the few films set on Wall Street that’s driven by female protagonists. The suspenseful drama is also notable that it was financed, produced, written and directed by women.

Screenwriter Amy Fox shared that she’d intended to create the cinematic equivalent of a page-turner that would keep audiences at the edge of their seats. In reference to the female cast and crew, she added, “Our goal is when you leave the movie theater, you talk about it – that it was directed by women, produced by women, written by women, starring women. It’s not there when you watch it, it’s just there after.”

The film marks the second feature for director Meera Menon, who said she sees the movie as being about the way “personal ambition and self interest can sabotage… upward movement for women in these industries.” She added, “I think the message is ultimately that they need to work together.”

Sarah Megan Thomas said the film was partly inspired by her husband, who works on Wall Street, and the types of women she’s encountered there who are never reflected in any of the other Wall Street-set movies. “We wanted to show a side of the world that I saw personally,” she noted. “So we interviewed many, many people on Wall Street. And to hear their stories and to incorporate the essence of the real Wall Street, that was intentional in the development of this film.”

British actor James Purefoy, who has the most significant male role in the drama, agreed, adding that he wanted to be involved purely because the film was breaking new ground. “We never see women in the workplace on Wall Street who aren’t hookers or housewives,” he said to the audience. “I know loads of female bankers in London and [wondered] why aren’t their lives up there on the screen?”