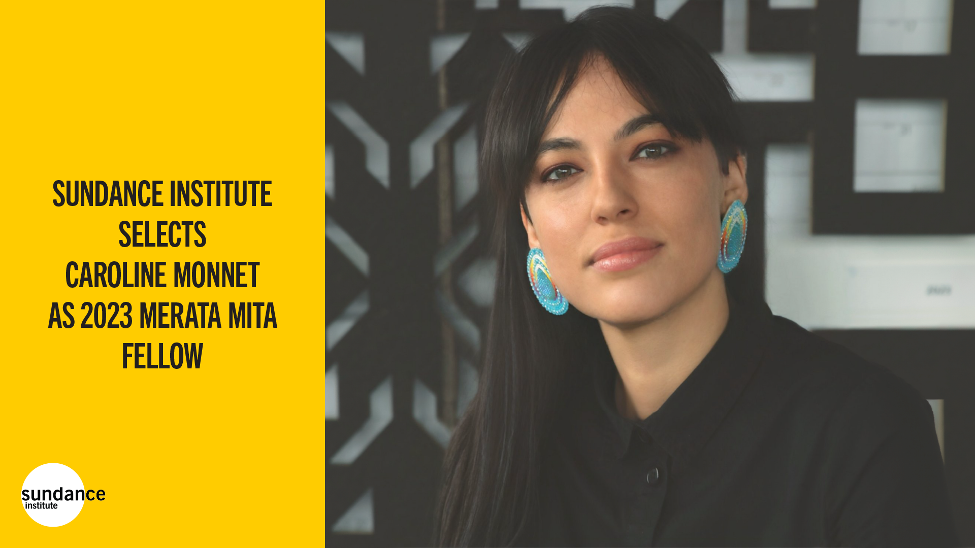 Caroline Monnet (Anishinaabe/French) is a multidisciplinary artist from Outaouais, Quebec. She studied Sociology and Communication at the University of Ottawa (CA) and the University of Granada (ES) before pursuing a career in visual arts and film. Her work has been programmed extensively in exhibitions and festivals internationally, including Sundance, Palm Springs (USA), TIFF, Cannes (FR), and the Whitney Biennale. In 2016, she was selected for the Cinéfondation residency in Paris. She is based in Montréal.

Merata Mita (Ngāi Te Rangi/Ngāti Pikiao) broke new ground as the first Māori woman to write and direct a dramatic feature film. She was an advisor and artistic director of the Sundance Institute Native Lab from 2000 to 2009, championing emerging Indigenous talent. In continuation of her legacy, the Sundance Institute is in its eighth year of awarding a fellowship in her name to an Indigenous woman-identified filmmaker from a global applicant pool. The Fellowship includes yearlong support with activities, including attendance at the Sundance Film Festival, access to strategic and creative services offered by Sundance Institute’s artist programs, a cash grant and mentorship opportunities.

“After years of watching her work evolve across many mediums, selecting Caroline Monnet as this year’s Merata Mita Fellow not only made sense, but her oeuvre also echoed Merata’s own creative spirit of breaking the mold and demanding that the work of Indigenous artists be met on its own terms,” said Adam Piron, Director, Sundance Institute Indigenous Program. “We’re beyond thrilled to be supporting Caroline in this next step in her creative journey and are elated to be a part of the creation of her film.”

“I am honoured to be named this year’s Merata Mita’s fellow and to be following in the legacy of such talented Indigenous women that have accomplished groundbreaking work,” said Caroline Monnet. “This acknowledgement from the Sundance Institute comes at a pivotal time for me. This recognition will allow me to continue on my cinematic journey and enable me to strengthen and further define my cinematic voice. This acknowledgment inspires me to continue to challenge myself and to strive for greater heights. I recognize that this would not be possible without the support of the indigenous filmmaking community and my community as a whole.”

Last year’s Merata Mita fellow, Fox Maxy, will be premiering their debut feature Gush as part of the New Frontier selection at the 2023 Sundance FIlm Festival.

The Sundance Film Festival, a program of the non-profit, Sundance Institute, is the preeminent gathering of original storytellers and audiences seeking new voices and fresh perspectives. Since 1985, hundreds of films launched at the Festival have gone on to gain critical acclaim and reach new audiences worldwide. The Festival has introduced some of the most groundbreaking films and episodic works of the past three decades, including Fire of Love, Cha Cha Real Smooth, Flee, CODA, Passing, Summer Of Soul (…or, When the Revolution Could Not Be Televised), Clemency, Never Rarely Sometimes Always, Zola, O.J.: Made in America, On The Record, Boys State, The Farewell, Honeyland, One Child Nation, The Souvenir, The Infiltrators, Sorry to Bother You, Top of the Lake, Won’t You Be My Neighbor?, Hereditary, Call Me By Your Name, Get Out, The Big Sick, Mudbound, Fruitvale Station, Whiplash, Brooklyn, Precious, The Cove, Little Miss Sunshine, An Inconvenient Truth, Napoleon Dynamite, Hedwig and the Angry Inch, Reservoir Dogs and sex, lies, and videotape. Its vibrant program platforms fiction and non-fiction features and short films; series and episodic content; emerging media, and performances, as well as conversations, and other events. The Festival takes place both in person in the state of Utah and online, connecting audiences across the U.S. to bold new artists and films. The 2023 Festival takes place January 19 – 29. Be a part of the Festival at Sundance Film Festival and follow the Festival at Facebook, Instagram, Twitter and YouTube.