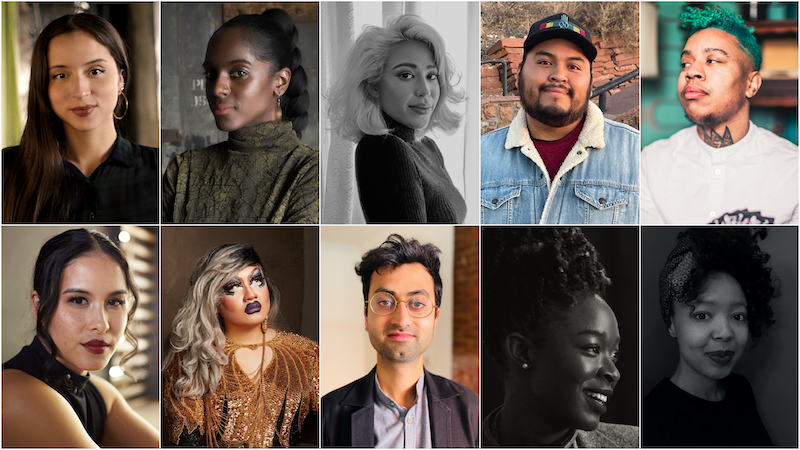 Los Angeles, CA – The nonprofit Sundance Institute announced today ten US-based artists of color selected for the 2022 Uprise Grant Fund. The grant supports the livelihood and career sustainability of BIPOC emerging artists and was founded in 2021 to help storytellers disproportionately harmed by the COVID-19 pandemic. The group selected for the 2022 grant will receive $10,000 each as well as community building artist development activities such as peer mentorship through monthly fellow meetings. Participants will be supported year-round so they can sustain a creative practice, helping to amplify critical stories and intersectional voices during a time when they are most needed.

For the 2022 group, over half identify as Queer/LGBTQ+ with Northern California, Seattle, Hawai’i, Kentucky, New Mexico, Los Angeles and New York represented as areas of residence for the artists receiving grants. Grantees were chosen after a thorough review process by a panel of external reviewers. Nominations were intentionally collected from the Sundance Outreach & Inclusion Department’s outreach efforts, Sundance staff, allied organizations, and nonprofit partners. Writer-Actor Henry Alexander Kelly (2021 Uprise Grantee) will be acting as an artist development consultant for the cohort this year.

“The Institute has a responsibility and ongoing commitment to support artists of color and our Uprise Grant Fund has been one of the ways in which we’ve celebrated BIPOC artists while they are in their state of becoming and discovery,” said Amber Espinosa-Jones, Manager, Outreach & Inclusion Department. “Providing funding for projects in development plays an important role in empowering these vibrant and inspiring storytellers to continue putting their work forward. It is so rewarding and a pleasure to uplift this incoming group.”

The Uprise Grants are supported by the Sundance Institute | Maja Kristin Granting Fund, which offers unrestricted grants to women and BIPOC filmmakers, producers and editors working in film, theater and emerging media. The nonrecoupable grants will focus on critical support for project advancement, career sustainability and living stipends. These grants are part of a continuum of support provided by our Feature Film, Documentary, Outreach & Inclusion and Interdisciplinary artist programs.

The fellows selected for the 2022 Uprise Grant Fund are:

Briana “Bree” Nieves (director/producer) with Arise! My Beloved (U.S.A): On the sleepy shores of Carmel, CA a group of elderly cloistered Catholic sisters live, never leaving their homes for the sake of silence and prayer for their entire lives. Arise! My Beloved is a rare access (by way of the Vatican) verité driven film that opens the doors to a hidden—expansive, yet dying world. Documentary.

Briana “Bree” Nieves (b. Oklahoma) is an emerging documentary and fiction filmmaker and producer. Her work addresses motifs of gender, faith, the body and the asian and black diaspora. Her short film Malditas, a co-production with WORLD channel, Asian Documentary Network and Center For Asian American Media, is available on the PBS App.

Naveen Chaubal (director / cinematographer) with Pinball (U.S.A): Pinball is an observational coming-of-age journey that follows 19-year-old Yosef in suburban Louisville, Kentucky as he navigates adulthood in the shadow of a war that displaced his family from their Iraqi homeland. Documentary.

Naveen Chaubal is a Louisville based director, producer and cinematographer whose films focus on the profound stories of immigrant suburbia. His work has been supported by ITVS, the Southern Documentary Fund, and New Orleans Film Society. He’s a fellow of Film Independent’s Project: Involve and BAVC’s MediaMaker programs.

Dillon Chitto (playwright) with Pigeon (U.S.A): Pigeon is about the chosen family a group of queer Urban Natives have formed to survive the world of white heteronormativity and white queerness in the northside of Chicago. The family is shaken when a mysterious figure appears, causing them to question their role in the family and society. Play.

Dillon Chitto is an Indigenous playwright of Mississippi Choctaw, Laguna, and Isleta Pueblo descent from New Mexico. There, he learned the importance of art, culture, and traditions from his family. In his playwriting, he connects these ideas using storytelling techniques learned throughout his life. He is currently in Chicago, Illinois.

Kyle Casey Chu (writer) with Go Back Home (U.S.A): In search of a new home, a newly-widowed Chinese-American mother moves with her son to the only San Francisco apartment she can afford, wherein a mysterious horror soon threatens their lives.

Kyle Casey Chu (Panda Dulce) is a San Franciscan Writer and Drag Queen. Her work has appeared on NPR, MTV, Condé Nast, Paramount+, at Harvard & MIT’s Broad Institute and more. She is the creator and star of Chosen Fam web series, featuring an all-Queer and Trans People of Color cast.

Kristine Gerolaga (writer/director) with Lamok (U.S.A): A cursed Filipino woman begins to perform underground abortions to repent for the killing she commits as a fetus-eating creature known as the manananggal. Narrative.

Osinachi Ibe (writer/director) with Tales From Under the Sun (U.S.A): During their first summer apart, two childhood best friends discover they have fallen in love with each other and embark on a spiritual journey that changes them forever. Narrative.

Osinachi Ibe is a Nigerian-American filmmaker and artist based in the San Francisco Bay Area. She creates intimate, feminine portraits that meditate on the complexities of the spirit, heart, and the divine. Osinachi received her MFA in Film Directing from Chapman University. She is currently developing her first feature film.

Arielle Knight (director) with Counting Down (U.S.A): A family grapples with uncertainty when a loved one is arrested and held in the carceral system against the backdrop of an unfolding global pandemic. Documentary.

Arielle Knight is a New York-based documentary filmmaker and producer. Mining the absurd, the mythological and the mundane, the work of her life and practice seeks to center and recover the multiplicity of Black experiences. Arielle aims to inundate the world with the dreams, visions, and beauty of Black lives on screen.

J Mase III is a Black/Trans author and filmmaker. He’s co-director of the forthcoming documentary, the Black Trans Prayer Book and finishing his latest solo work, Is Your God a Violent God? Finding a Theology for Survivors. He believes in dismantling religious violence, creating spaces to heal and reparations.

April Maxey (director/writer) with Work (U.S.A): A young artist sabotages her Park Slope engagement and returns to a gig as a lap dancer in a desperate search for control and self-love. Narrative.

April Maxey is a queer mixed Chicana filmmaker from San Antonio, Texas. She is an alumna of Berlinale Talents and the AFI Directing Workshop for Women. Her work often centers connection within the queer experience and characters who challenge mainstream culture. Her short film Work premiered at Sundance in 2022.

Phumi Morare (director/writer) with There Is Salt In The Water (U.S.A): A Senegalese surfer living on the coast of South Africa, tries to start a surf school for Black children from the slums. His life is complicated when his former lover haunts him and his daughter develops a mysterious, spiritual illness connected to the ocean. Narrative.

Phumi Morare is a writer/director from South Africa. Her short film Lakutshon’ Ilanga (When The Sun Sets) was shortlisted for the 94th Academy Awards and won an NAACP Image Award. She participated in the Tribeca Chanel Through Her Lens Women’s Filmmaker Program and the 2022 Film Independent Screenwriting Lab.