#Sundance40th: A Look Back at the Sundance Institute in the Early 2000s 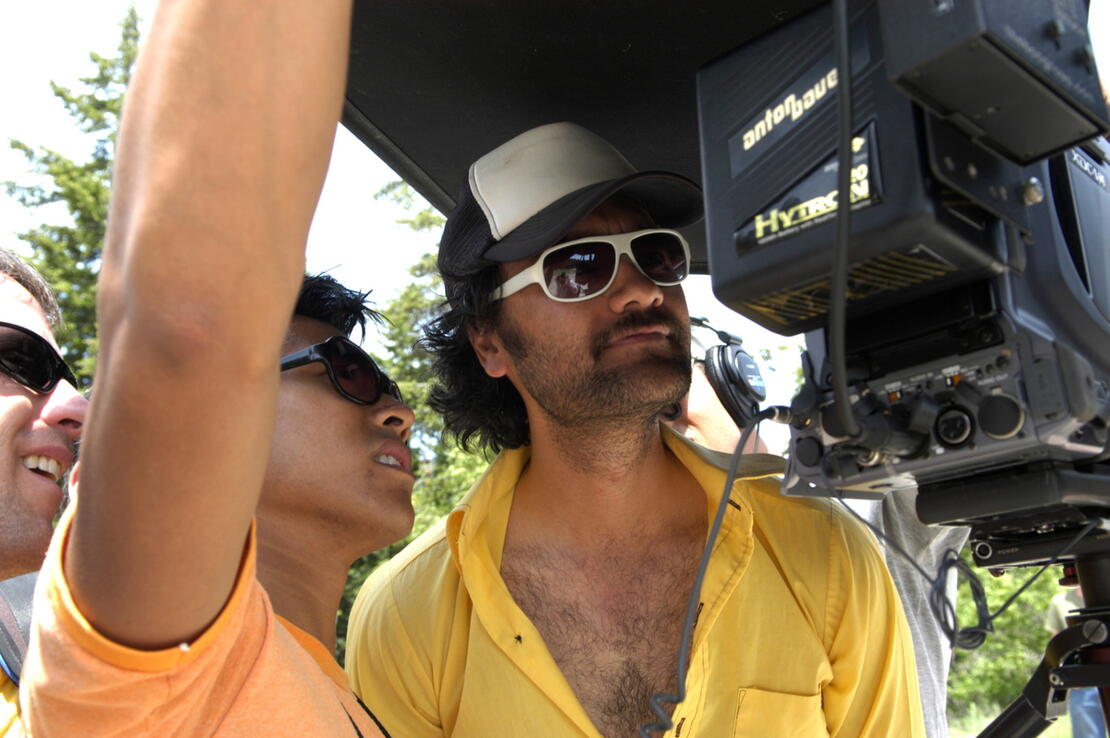 Taika Waititi’s romantic comedy Eagle vs Shark, Alex Riviera’s Latinxfuturist Sleep Dealer, Miranda July’s mesmerizing drama Me and You and Everyone We Know… These were just a few of the striking features to come out of the Sundance Institute labs in the early 2000s, a decade that saw the formal launch of the Institute’s Documentary Fund, the birth of the Sundance Film Festival’s immersive New Frontier section, and our very first Producing Lab.

“I studied film in school — it was just theory based. The [Sundance labs] were amazing. That’s where I really learned how to work, and work with actors, and make films,” recalls Sterlin Harjo of the time he spent incubating his debut feature, Four Sheets to the Wind, at the Sundance Mountain Resort.

“I thought I was in a different universe on another planet,” recalls actor America Ferrera of her first trip to Park City in 2002 for the premiere of Cardoso’s landmark coming-of-age drama, her first starring role and her first time seeing herself on-screen. “I didn’t know what was happening. It felt like nothing was ever the same after that for me, for my career, for my dreams, for what was possible for me.”

Donate now to support the storytellers of tomorrow, and help us spread the word on social via the hashtag #Sundance40th.

To learn even more about the Institute through the years, from 1981 through today, see the master timeline created by the Sundance Institute archives team. Here’s a quick look at some of the biggest milestones from the early 2000s.

2000: The Sundance Film Festival becomes one of the first major festivals to offer digital projection.

2002: Our Documentary Fund is officially launched in partnership with the Open Society Foundation. Through the initiative, projects like Born into Brothels, Trouble the Water, and Strong Island are eventually brought to life.

2007: New Frontier launches at the Sundance Film Festival, showcasing and advancing the work of artists and technologists working together to push the boundaries of storytelling.

2008: The Institute hosts its first Creative Producing Lab, designed to nurture the next generation of independent producers as well as create community and connection among producers.

Taika Waititi attended the Sundance Film Festival for his shorts Tama Tu and the Oscar-nominated Two Cars, One Night before he came to the 2005 labs to workshop his first feature, Eagle vs. Shark. He also received screenwriting support for Boy, and premiered both of these supported films at the Festival, as well as What We Do in the Shadows and The Hunt for the Wilderpeople, before becoming an Oscar-winning screenwriter for Jojo Rabbit and one of the most in-demand directors in Hollywood.

Alex Rivera brought his Latinxfuturist screenplay Sleep Dealer to the 2001 Directors Lab. It premiered at the 2008 Sundance Film Festival, where it took home both the Waldo Salt Screenwriting Award and the Alfred P. Sloan Award.

ME AND YOU AND EVERYONE WE KNOW

Miranda July directed several shorts and video projects and was a significant figure in the Portland riot grrl scene through her writing and performance art, but her first feature film was Me and You and Everyone We Know, which she workshopped at the 2003 Directors Lab. It premiered at the 2005 Sundance Film Festival, where it won the Special Jury Prize for Originality of Vision Dramatic.

Hany Abu-Assad workshopped Paradise Now at the 2003 Directors Lab, and the film went on to win the Golden Globe for Best Foreign Language Film.

FOUR SHEETS TO THE WIND

Sterlin Harjo’s 2004 Directors Lab project Four Sheets to the Wind premiered in competition at the 2007 Sundance Film Festival. Actor Tamara Podemski won a Special Jury Prize for Acting at that Festival and was then nominated for an Independent Spirit Award.

BEASTS OF THE SOUTHERN WILD

Beasts of the Southern Wild, directed by Benh Zeitlin, received numerous forms of Sundance Institute support, including the 2009 Directors Lab and Creative Producing Lab. The project won the Excellence in Cinematography Award and Dramatic Grand Jury Prize at the 2012 Sundance Film Festival, and was recognized by a plethora of other awards and festivals, including four Oscar nominations.

Passing Strange was brought to the Theatre Lab in back-to-back years in 2004 and 2005 for development by creators Stew and Heidi Rodewald. Stew had never written a play before, yet he ended up winning the Tony Award for Best Book of a Musical for his writing. Spike Lee filmed the play, and the subsequent film was screened at the 2009 Sundance Film Festival.

Dee Rees began writing the feature-length screenplay for Pariah in film school and workshopped it at the 2007 Screenwriters Lab. She then adapted it as a short that screened at the 2008 Sundance Film Festival while she continued to work on the feature version, eventually bringing it back for the 2008 Directors Lab. The completed feature film screened at the 2011 Sundance Film Festival where it won the Excellence in Cinematography Award in U.S. Dramatic.

BEFORE YOU GO: Through the month of August, we’re looking to raise vital funds to support the next generation of independent storytellers as we commemorate our 40th year as an Institute. Will you join us?