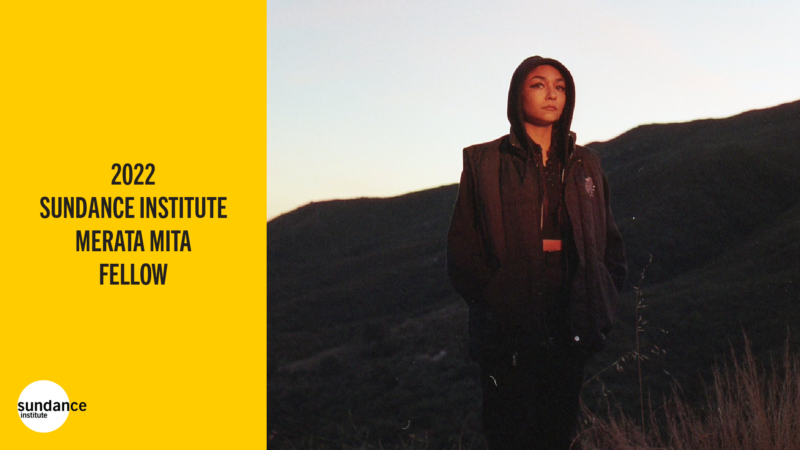 Park City, UT — Sundance Institute announced today the recipient of the 2022 Merata Mita Fellowship, an annual fellowship named in honor of the late Māori filmmaker Merata Mita (1942-2010) designed for Indigenous women-identified artists who are striving to direct a feature film. This year’s Fellow, Fox Maxy (Payómkawichum and Mesa Grande Band of Mission Indians) was recognized at the Native Forum Celebration on The Spaceship in the Festival Online Platform during the 2022 Sundance Film Festival.

The Native Forum Celebration featured an opening blessing by Bart Powakee and the Red Spirit Singers from the Ute Tribal Nation and remarks from newly appointed Sundance Institute CEO Joana Vicente, Sundance Institute Board member Amy Redford, Nia Tero (represented by Tracy Rector), Jennifer Loren from the Cherokee Nation Film Office, and Indigenous Program Interim Director Adam Piron (Kiowa and Mohawk). Piron also announced the 2021 Native Lab Fellows and Artists-in-Residence and acknowledged the nine Indigenous-made projects from around the world that are premiering at the 2022 Sundance Film Festival from January 20-30.

Merata Mita (Ngāi Te Rangi/Ngāti Pikiao) was one of the first Māori women to write and direct a dramatic feature film. She served as an advisor and artistic director of the Sundance Institute Native Lab from 2000 to 2009, where she championed emerging Indigenous talent. In continuation of her legacy, the Sundance Institute is in its seventh year of awarding a fellowship in her name to an Indigenous woman-identified filmmaker from a global applicant pool. The Fellowship includes a cash grantand yearlong support with activities, including attendance at the Sundance Film Festival, access to strategic and creative services offered by Sundance Institute’s artist programs, and mentorship opportunities.

“Gathering each year to celebrate the memory of our Sundance Institute colleague Merata Mita in this way is so rewarding as she was the first Indigenous woman to solely write, direct and produce a dramatic feature film — it’s only right to pass on that torch every year by providing resources and support to one of the many Indigenous women-identified filmmakers she has inspired globally,” said Adam Piron. “We’re in a moment where more Indigenous artists are telling their stories to a wider-reaching audience than ever before. However, the work of indigenizing the moving image is ongoing and, like Merata, we remain committed to contributing to that work in practical ways that build community and uplift Indigenous voices.”

“This opportunity feels like the biggest prize from the craziest game and it came at a time when I’m finally not scared of anything,” said Maxy. “I’ve been filming, taking photos and making collages with sounds or visuals since a very young age. I film every day, but it took me over a decade to put myself out there.”

“It takes guts to be vulnerable and pour your real emotions into a project, and there’s no guarantee that anyone will care,” Maxy continued. “When I heard that I received this fellowship, I cried. This means that my voice in my work is actually reaching people and I’m being heard. I’m grateful to the entire Sundance team. Our talks keep me calm. It’s like having a group of friends and mentors who are rooting for me to do what I want — they encourage me to carve my own rules and set out on my own path.”

The Sundance Film Festival has introduced global audiences to some of the most groundbreaking films of the past three decades, including Flee, CODA, Passing, Summer Of Soul (…or, When the Revolution Could Not Be Televised), Clemency, Never Rarely Sometimes Always, Zola, On The Record, Boys State, The Farewell, Honeyland, One Child Nation, The Souvenir, The Infiltrators, Sorry to Bother You, Won’t You Be My Neighbor?, Hereditary, Call Me By Your Name, Get Out, The Big Sick, Mudbound, Fruitvale Station, Whiplash, Brooklyn, Precious, The Cove, Little Miss Sunshine, An Inconvenient Truth, Napoleon Dynamite, Hedwig and the Angry Inch, Reservoir Dogs and sex, lies, and videotape.

Founded in 1981 by Robert Redford, the Institute’s signature Labs, granting, and mentorship programs, dedicated to developing new work, take place throughout the year in the U.S. and internationally. Sundance Collab, a digital community platform, brings artists together to learn from each other and Sundance advisors and connect in a creative space, developing and sharing works in progress. The Sundance Film Festival and other public programs connect audiences and artists to ignite new ideas, discover original voices, and build a community dedicated to independent storytelling. Sundance Institute has supported such projects as Clemency, Never Rarely Sometimes Always, Zola, On The Record, Boys State, The Farewell, Honeyland, One Child Nation, The Souvenir, The Infiltrators, Sorry to Bother You, Won’t You Be My Neighbor?, Hereditary, Call Me By Your Name, Get Out, The Big Sick, Mudbound, Fruitvale Station, City So Real, Top of the Lake, Between the World & Me, Wild Goose Dreams and Fun Home. Join the Sundance Institute on Facebook, Instagram, Twitter and YouTube.