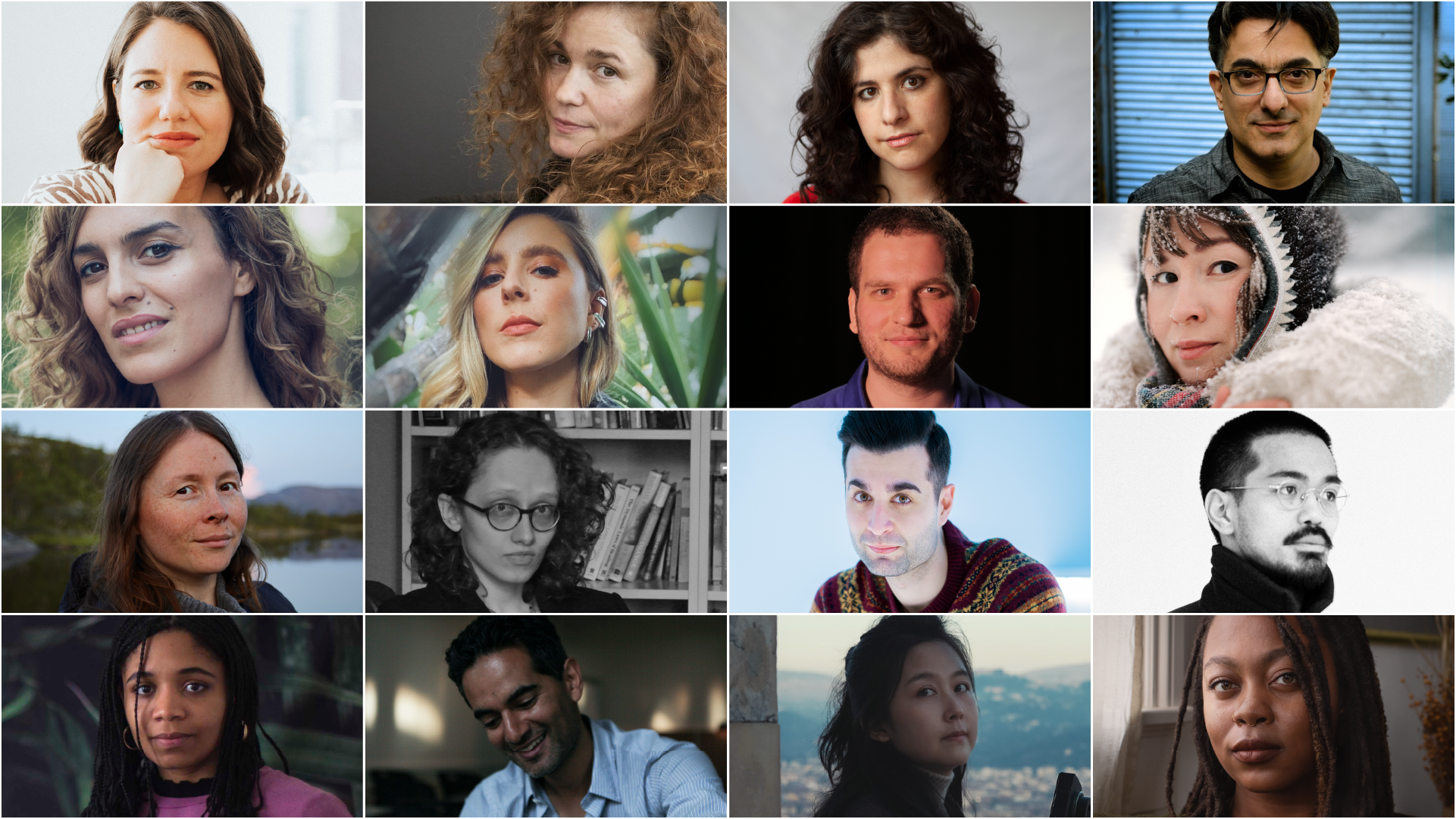 “One of the highlights for us every January is gathering a new and uniquely talented group of storytellers at our annual Screenwriters Lab. It’s especially exciting to be together again where our Advisors and writing fellows will spend four days in our immersive lab online in intensive story meetings, craft workshops, and creative conversations, as the Fellows begin their cycle of year-round support.” said Michelle Satter. “These sixteen writers, selected for their vision and distinctive voices, will form a lifelong  community of filmmakers, and we’re thrilled to see the outcomes of the collaboration between the Lab Fellows and their mentors for years to come.”

The projects and fellows selected for the 2022 January Screenwriters Lab are:

Eliza McNitt (Writer/Director) with BLACK HOLE (U.S.A.):  At a pivotal moment in both her career and her complicated relationship with her mother, an astrophysicist’s universe unravels when she encounters a black hole of her own creation.

Eliza McNitt is a writer and director. An Emmy Awards Finalist and recipient of the VR Grand Prize at The Venice Film Festival, her work has appeared at Sundance, SXSW, AFI Fest, Cannes NEXT, Tribeca, Telluride, and Venice. She’s currently writing and directing MARS 2080, an IMAX Experience with Imagine Entertainment.

Olive Nwosu (Writer/Director) with A Burial (Nigeria, U.K.): Faced with the sudden death of a visiting British dignitary, an older Nigerian politician becomes obsessed with giving the foreign stranger a proper burial. He embarks on a relentless quest across Nigeria that forces him to confront the choices he’s made in his own life.

Born in Lagos, Nigeria, Olive Nwosu is a BAFTA-Pigott Scholar, Alex Sichel Fellow at Columbia University, and an ‘African Promises’ director selected by the Institut Français. Nwosu’s work is informed by the intersectional nature of her life across multiple continents and identities. Her mission is to tell urgent, cinematic, African stories.

Dina Amer (Co-writer/Director) and Omar Mullick (Co-writer) with Cain and Abel (France): The fates of two French-born Muslim Arabs born in the same neighborhood collide as they find themselves on opposite sides of the 2015 Charlie Hebdo attack: one a police officer, the other a terrorist. Who are these men beneath their uniforms, and how many degrees of separation really exist between them?

Omar Mullick directed the feature non-fiction film These Birds Walk, which was theatrically distributed by Oscilloscope. He also co-wrote the screenplay for You Resemble Me which premiered at the Venice Film Festival in 2021. He is a documentary director of films and various series at Amazon, HBO and CNN

Dina Amer is an award-winning filmmaker. In her directorial debut, You Resemble Me, cultural and intergenerational trauma erupt in this story about two sisters on the outskirts of Paris. The film premiered at the Venice Film Festival and was executive produced by Spike Lee, Spike Jonze, Riz Ahmed, and Alma Har’el.

Michael León (Co-writer/director) and Ashley Alvarez (Co-writer) with Crabs in a Barrel (U.S.A.): When her talentless frenemy is anointed as the “future of Latinx voices,” a struggling Latina writer sets out to sabotage this unearned opportunity. After failing to recruit her friends to join her crusade, she catches a lucky break when she learns her rival isn’t exactly who she says she is. Recipient of the Sundance Institute Comedy Fellowship.

Michael León is a Cuban-American writer/director. His short Crabs in a Barrel is an HBO Latinx Short Film Competition winner. In 2020, his play The Cubans had its world premiere at Miami New Drama. He is the co-creator of the immersive virtual play Carla’s Quince (Drama League Nomination), and is currently working on a new Broadway musical.

Neo Sora (Writer/Director) with Earthquake (U.S.A., Japan): Two teenage best friends living in near-future Tokyo, where earthquakes are part of the fabric of life, must confront the end of their friendship as they navigate diverging paths towards adulthood.

Neo Sora is a filmmaker, translator, and artist working in New York and Tokyo. His short film THE CHICKEN premiered at the 2020 Locarno International Film Festival. After being written up in Variety and Cahiers Du Cinema, Filmmaker Magazine named Sora one of the 25 New Faces of Independent Film.

Yuan Yuan (Writer/Director) with Late Spring (U.S.A.,China): A Chinese factory worker travels to New York for her daughter’s eagerly anticipated college graduation, only to be thrust into a desperate search in unfamiliar territory when she learns the girl is missing.

Yuan Yuan is a Chinese writer-director and an MFA thesis candidate at NYU, where she is an Ang Lee Scholar and Spike Lee Film Production Fellow. Her short film Heading South has won awards at the DGA Student Film Awards, Aspen, Palm Springs, Hamptons and Hong Kong International Film Festival.

Marja Bål Nango (Co-writer/Director) and Ingir Bål Nango (Co-writer) with I Love My Guođoheaddji / I Love My Reindeerherder (Norway, Sweden): A closeted gay Sámi boy navigates a secret boyfriend, a local criminal plot, and family drama as he tries to achieve his dream of living as a reindeer herder with his own herding license.

Marja Bål Nango is a film director, screenwriter and producer. Her latest short, The Tongues, won best international short film at the 2020 Palm Springs Shortfest. She was a Merata Mita Fellow at the 2021 Sundance Film Festival with her project I love my Guođoheaddji.

Ingir Bål Nango is a screenwriter. She previously worked as scriptwriter and host for Sámi Children’s TV at NRK TV, and was educated at the Norwegian Children’s Book Institute in Oslo. She wrote and co-directed Hilbes biigá, which screened at nearly 30 film festivals, and The Tongues, winning four awards, three of them at Oscar® Qualifying Film Festivals.

Zandashé Brown (Writer/Director) with The Matriarch (U.S.A.): When the death of an estranged matriarch summons a fractured family back to their hometown in rural Louisiana, a forlorn teen attempts to forge a relationship with her departed grandmother through ancestral veneration and unlocks instead a deceptive world of spirits, secrecy, and hysteria. Recipient of the Sundance Institute Horror Fellowship, supported by the K Period Media Foundation Fund.

Zandashé Brown is a Louisiana born-and-based storyteller whose work funnels spirituality, catharsis, and a rural Black experience through the lens of southern gothic horror. Her films have been supported by Tribeca, Chanel, Kickstarter, and the New Orleans Film Society, where she programs narrative films for the New Orleans Film Festival.

Hasan Hadi (Writer/Director) with The President’s Cake (Iraq, U.S.A): While everyday people struggle daily to survive under sanctions in Saddam’s Iraq, nine-year-old Saeed must use his wits to gather the ingredients for the required cake to celebrate President Saddam Hussein’s birthday or face the consequences alongside his family.

Hasan Hadi is an Iraqi writer/director based in New York. His short, SWIMSUIT, won an Oscar-qualifying award at Urbanworld. Hadi’s recognitions include the Tisch Dean’s Fellowship, The Gotham-Marcie Bloom Fellowship, the Black Family Production Prize, the Sloan Foundation Award and the BAFTA Newcomers Program. Currently, Hadi is an adjunct professor at NYU’s Graduate Film Program.

Daniele Anastasion (Writer/Director) with The Scout (U.S.A): A recently widowed biologist is tasked with eradicating thousands of birds accused of spreading disease from a landfill. When her young son develops an unexpected bond with the flock’s “scout bird,” both mother and son must contend with the complex emotional fallout of their shared loss.

Daniele Anastasion is a writer and director whose films have screened at Sundance and Tribeca and have been nominated for an Emmy. Her first feature documentary received the Sundance Award for Best Cinematography and was nominated for an Independent Spirit Award. The Scout is her first narrative feature.

Caledonia Curry (Director) and Meagan Brothers (Writer) with Sibylant Sisters, Silent Snake Magic (U.S.A): Growing up with an absentee witch for a mother, the young Sibylant Sisters must fend for themselves in a frightening world of ogres, gnomes, maleficent toads, and enchanted paper dolls.  If they want to survive, they’ll need to learn how to make their own magic.

Caledonia Curry (aka Swoon) is an artist and filmmaker recognized for her pioneering vision of public artwork. Through intimate portraits, animated films, immersive installations, and multi-year community based projects, she explores the potential inherent within the creative process to act as a catalyst for social change and interpersonal healing.

Meagan Brothers is the author of Debbie Harry Sings in French, a 2009 ALA Best Book for Young Adults, and its prequel, Supergirl Mixtapes.  Her third novel, Weird Girl and What’s His Name, was named one of Kirkus Review’s Best Teen Books of 2015.

David Miranda Hardy (Writer/Director) with The Swim Lesson (U.S.A.): Mara postponed her career to raise her daughters, while her husband found success as a professor at an elite liberal arts college. After discovering he hid a sexual misconduct complaint brought by a student, Mara develops a secret relationship with his accuser, jeopardizing her family and the opportunity to restart her career.

David Miranda Hardy is a Chilean filmmaker living in Vermont. His political thriller Bala Loca proudly lost a Peabody Award to Better Call Saul, and was recommended by Variety, the New York Times, and Rotten Tomatoes. Hardy holds an MFA from Temple University and is currently an Associate Professor at Middlebury College.