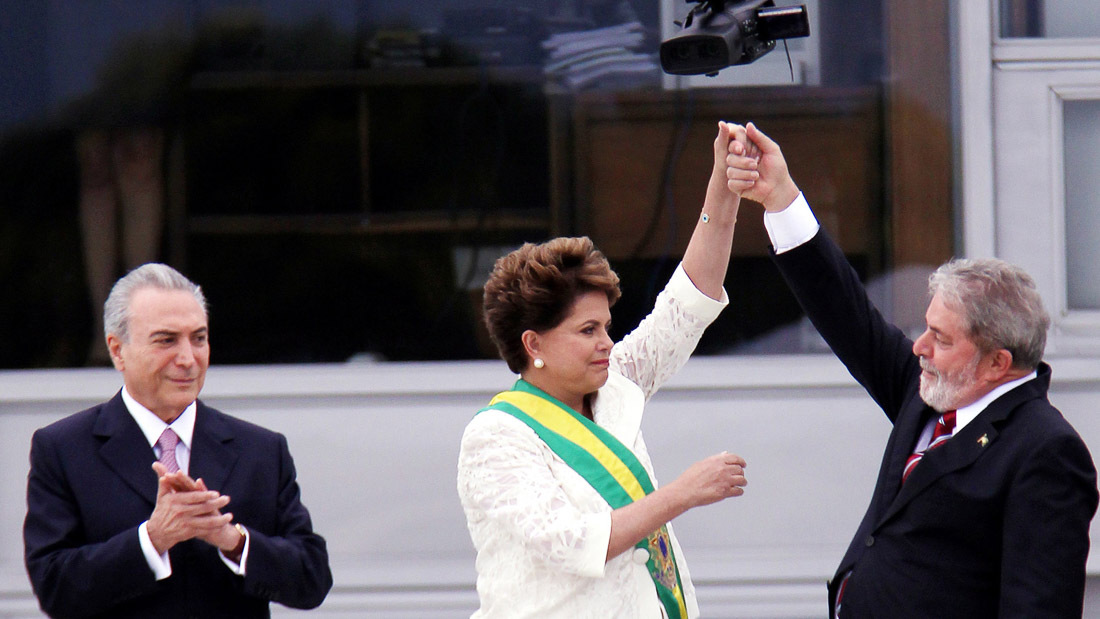 Earlier this year, the Sundance Institute marked its 40th anniversary, and to commemorate the occasion, we caught up with dozens of Institute alumni to learn more about how they brought their projects from development to debut. In our Straight Out of Sundance series, we’ll be sharing their stories. Want to learn more about the nonprofit Institute’s year-round work supporting artists around the world — and how you can help? Visit our Membership page today.

When Petra Costa attended the Sundance Film Festival in 2013 as an audience member, the Brazilian filmmaker had no idea her experience foretold her own political documentary — and an Oscar nomination — just six years later.

Costa witnessed a screening of The Square, a project about the 2011 movement for democracy in Egypt that won the Audience Award in our World Cinema Documentary competition. “I remember coming out of the film thinking how lucky I was, and we were, as Brazilians, to have such a solid democracy,” she recalled. “And then five years, six years later, there I was at Sundance premiering a film about the destruction of Brazilian democracy.”

The Square resonated with her, attuning her to the political climate in Brazil, she says: “I believe that if I hadn’t been at Sundance six years before, maybe I wouldn’t even have noticed the erosion of Brazilian democracy when it began,” she said. “So the Festival was important to open my eyes so I could be sensitive to the political earthquake that was taking place.”

The result was The Edge of Democracy, which played at the 2019 Festival and was later nominated for an Oscar for Best Documentary Feature. The film integrates Costa’s family’s personal story into the bigger picture of political divisiveness and corruption in Brazil, the impeachment of a Workers’ Party president, and the emergence of a more authoritarian government. The film has provided a cautionary tale for democracies throughout the world.

During development of the project, Costa took it to the 2017 Documentary Edit and Story Lab at the Sundance Institute. There, she received valuable feedback from mentors — as well as validation. “When I arrived, I was super insecure whether I would narrate the film or not, and how much. The tutors, they really believed in my voice and in my narration. They supported it,” she said. “And while I was there, I wrote two of the most important sequences of the film… And it gave me the courage to have my voice in the film, as essential as that.”

The New York Times reinforced that creative decision once the film received wide release, opining that Costa’s personal story enhanced the credibility of the documentary rather than undermining it.

A vivid memory of the 10 days of the Institute’s lab experience remains with Costa. She recounts the exhilaration of riding the chairlift up the mountain at the Sundance Resort. “And it would be just a moment out of time and zooming out into your creative challenges. It helped make everything feel more feasible. Just the fact that you elevate yourself in space helps free the mind. So it was a very special parenthesis in the midst of the lab.”

It reinvigorated her, gave her permission to be bold and innovative.

“That was one of the most amazing creative experiences I had, of feeling completely supported to take risks during those 10 days, I believe, in a place that just felt like paradise and surrounded by the most amazing artists that were there as tutors and companions.

“It was hard to leave. And if I had a vision of a place where I would want to create all the time, it would be there and with those people — or more people like the people that Sundance generated.”