“Storytelling Is Our Right; Filmmaking Is Our Privilege”: Meet the 2019 Merata Mita Fellows 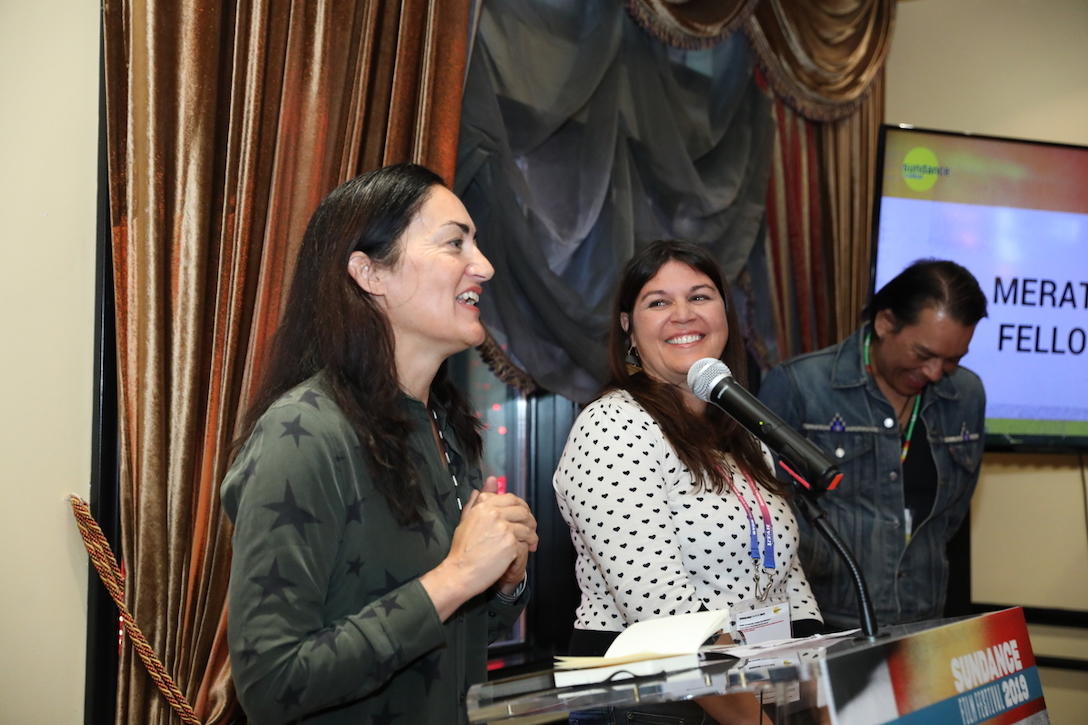 The Sundance Institute Merata Mita Fellowship for Indigenous Artists pays tribute to the immense artistic contributions of Merata Mita (Ngāti Pikiao/Ngāi Te Rangi), who served as an artistic director to our Native Filmmakers Lab and was the first Indigenous woman—and the only Māori woman—to write and direct a dramatic feature film.

The fellowship serves to continue Merata’s legacy and cultivate a stage for other Indigenous women around the world to tell their stories. Applications for the 2020 fellowship are open from October 8 to October 28—for more information, visit the application page.

Below are remarks from Ainsley Gardiner and Briar Grace-Smith, a co-directing duo and the recipients of the 2019 Merata Mita Fellowship.

My mountain is Pūtauaki, my canoe is Mataatua, my river is Rangitāiki, and I’m from the tribes of Ngāti Awa, Ngāti Pikiao, and Te-Whānau Apanui.

Merata once called my cousin Cliff Curtis and I spoiled brats. We were arguing when we were producing Taika Waititi’s film Boy together, and Merata taught me one of my greatest lessons at that time: Although storytelling is our right, filmmaking is a privilege afforded to very few—and if you have the ability and opportunity to do so, then get over yourselves and get moving.

Briar and I applied to the Merata Mita Fellowship with a film called Cousins—a film that Briar wrote and that we’re co-directing. It was a film that Merata wanted to make, and it’s a film that she should have made. If it weren’t for the world that we live in, and the deeply institutionalized racism of the government and organizational structures that we come up against, she would have made it 15 years ago. Briar and I are very aware of how privileged we are to have known Merata, and we’re very aware of the giant footsteps that we walk in on our way to make Cousins.

We’re incredibly grateful for this fellowship and for the many people and organizations that continue to offer alternative structures where Indigenous people can thrive and where we all belong. Tēnā koutou.

My journey with Cousins started with the book’s launch, 24 years ago at a marae—a meeting house—called Takapūwāhia. Patricia Grace, the author, passed the book around a circle of hands that included Merata Mita’s. I had brought my newborn son, and so as Cousins was passed around the circle, my baby was passed around as well, blessed and held and pressed.

I was really lucky to have both Patricia Grace and Merata Mita as very close friends. I was often privy to their conversations as I was making cups of tea. They talked about the film adaptation of Cousins. And then our dear Merata passed, and the adaptation faded away.

When Ainsley rang me about revitalizing the Cousins project, I was working furiously as a playwright and screenwriter. She said, “Do you know of anyone who could write this?” I was so scared, but I decided to say yes. When it came to directing, Ainsley and I put a whole lot of names forward to direct it, names that weren’t ours. Nothing felt right. After a time, we both co-directed a project together, and after that, I rang Ainsley up and said, “I think I know who should be directing this film.” We should be directing this film.

It felt like the book had finally gone completely around the circle. Now, the story of Cousins is back in our hands. Thank you to everybody that has supported us to find our voices and take up this mantle. Ngā mihi.