Q&A: Stanley Tucci Reflects on His Experiences with Sundance Institute and the Festival Over the Years 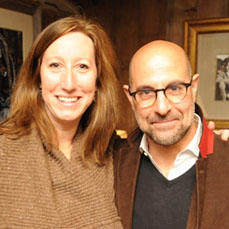 Stanley Tucci has been a vital part of the indie film community and Sundance Institute family for more than 20 years, and this month he takes on an even bigger role: Sundance Institute Board of Trustees member. Before he begins his tenure as a leader in the future of the Institute, executive director Keri Putnam sat down with Tucci to discuss his work, and to welcome him into the fold with lively questions submitted by our own community of film lovers. Thanks to all who submitted questions!

You’ve been an actor, director, screenwriter, and producer on films that have premiered at the Festival, and you’ve also been a creative advisor at the labs. Now you’re a member of the board of trustees. What was your first involvement with Sundance?

My first involvement was as an actor in a 1987 Lab project. John Turturro is a friend of mine, and he was to come out with his wife and they were to participate as actors in Maurice Sendak’s film that he was workshopping at the lab. John couldn’t go, so Maurice asked me to. I came out to Sundance, and I got to work on other people’s projects too. It was a great experience. I came back again later through the Festival with a number of films, and then I was asked to work as an Advisor. Now I try to come every year.

What is your favorite Sundance experience?

There are a couple. Meeting Maurice Sendak was pretty great. At that time, Bertrand Tavernier was here as an advisor. Tavernier had been, and still is, one of my favorite filmmakers. I got to sit and have lunch with him and talk to him, and that was very exciting for me. After that, we premiered Big Night at Sundance. That was kind of magical because, first of all, it was received so well.

It allowed us as filmmakers, Campbell (codirector Campbell Scott) and I, the ability to move to another place in our careers. It was received really well by the press, so we had a lot of say about what was going to happen to this film, and what wasn’t. In other words, when people wanted to change the ending, there was no way that they were going to be able to do that because all these great reviews had been written. That was a magical time. It snowed every day. It was physically beautiful, it was creatively beautiful and exciting, and I’ll never forget it.

What do you think Sundance offers to artists?

The labs offer you the greatest thing that any institution can give you, which is the opportunity to fail, again and again. That’s why you’re there. You’re not there to succeed, you’re there to make mistakes, and from those mistakes comes real learning. But you don’t have to figure it out yourself. You have all these people around you who are saying, “Okay, that didn’t work; why do you think it didn’t work?” And that’s an incredibly important thing and it’s not something that you find out in the real world.

A lot of the projects that come through Sundance—especially in the documentary realm—spark a dialogue with audiences about a social or political issue. What do you think is the role of the modern storyteller?

I think the role of storytellers and artists has never changed since the beginning of time. I think it has to do with the individual. If you are politically motivated, socially motivated, then your art should express that. Artists better society simply by telling stories truthfully, whatever those stories are.

Questions from the Audience:

Eoghan McQuinn: What initially drew you to performing?

I started performing when I was in elementary school, and I realized that I felt much more comfortable on-stage than I did off-stage.

David Soncin: What kind of sacrifices did you make to get where you are and do you think they are important for aspiring filmmakers/actors to consider?

Jane Evans Bonacci: Sometimes you are on screen for a very short time and yet are still one of the most memorable aspects of the film. How do you make small parts noteworthy?

Just tell the truth—that’s all.

Courtney Young: What are your “guilty pleasure” (or not-so-guilty) film favorites?

James Bond movies. Any Marx Brothers movie—these things are not guilty pleasures, they’re arguably some of the greatest films ever made. The first Rambo movie. I could watch that again and again.

Cassandra Nicholson: With budget constraints hurting even large studios and production companies these days, but also technology allowing for efficient, inexpensive production models, where do you see the indie film market heading over the next five years?

That’s a very hard question to answer. I wish we all knew, but I don’t think we do know. I see all these little companies are springing up again, which is really good, and people are wanting to see more independent films. But there have to be a venues for them, and the problem is that there aren’t. Government funding wouldn’t be such a bad thing.

Brent Barthel: What are you hoping to contribute as a member of the Sundance Institute Board of Trustees?

Whatever I can. Whatever I’ve learned about filmmaking or from being in the trenches for 30 years as an actor and filmmaker.