Choose Your Own Ending: A Sundance Valentine’s Day Watchlist for True Believers and Cynics Alike 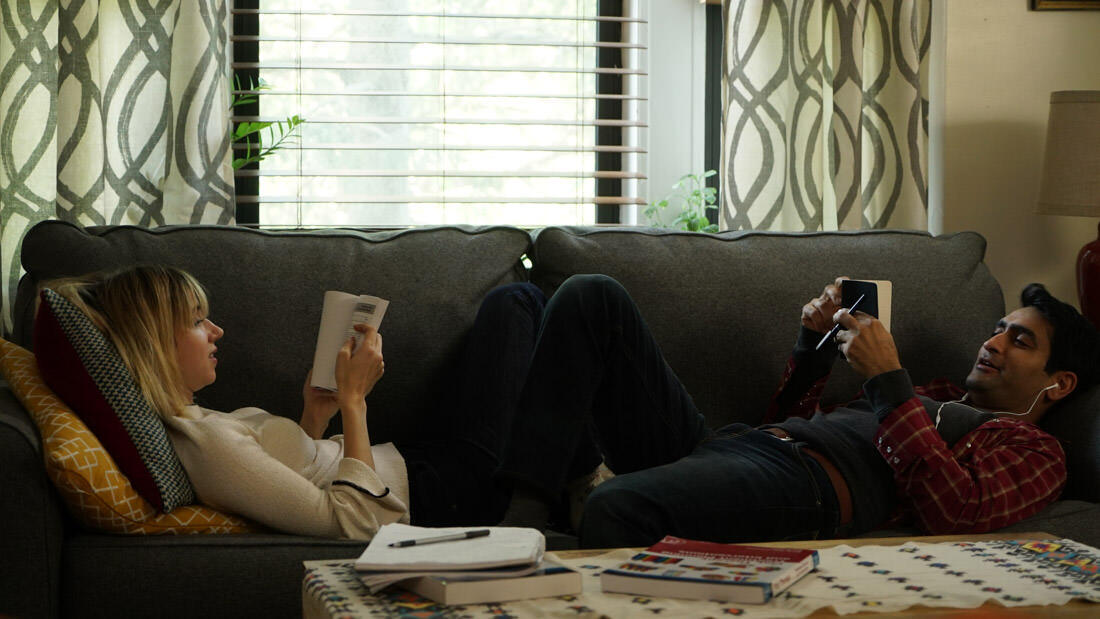 Kumail Nanjiani and Zoe Kazan star in the 2017 Festival comedy “The Big Sick.”

A classic ’90s rom-com starring none other than Hugh Grant? Check. A lush period piece that harkens back to the Technicolor melodramas of Old Hollywood? Check. An arty European affair with a satisfyingly ambiguous ending? Check. A… cult-classic sci-fi romance set in ’80s Los Angeles on the eve of destruction?! Yep, that too.

Over the years, the Sundance Film Festival has played host to all kinds of love stories, from sweet to cynical and from daffy to doomed… and just about everything in between. This Valentine’s Day, we figured we’d assemble a watchlist that’s a bit like the perfect box of chocolates—there’s something for everyone here, and you never know quite what you’re going to get.

“The jazz is smooth and the air sultry in the New York summer of 1957. Sylvie helps around her father’s record store as she waits for her fiancé to return from war—until sweet saxophonist Robert walks in looking for a day job to subsidize his residency at the Blue Morocco lounge. This chance meeting kindles a deep passion in each of them unlike anything they’ve felt before. Sylvie’s mother immediately disapproves and reminds Sylvie of her engagement, while Robert’s band books their first big gig overseas. As time passes, the sexual revolution begins, and Motown becomes king, the two fall in and out of each other’s arms, but never out of love.” [WATCH NOW]

“In as sparkling a debut as recent memory recalls, Gina Prince-Bythewood displays a formidable directorial touch, heralding the emergence of a major new talent. But it’s not just her directing abilities that are impressive, for much of the outstanding quality of Love and Basketball stems from a script which is sweetly romantic yet compelling real. The story is rather straightforward actually. Two kids, a boy and a girl, meet on their neighborhood basketball court. … As their lives as people and athletes mature through high-school recruitment, the challenge of performing at the next level for more demanding coaches, and much more competitive environments, their feelings for each other blossom beyond friendship.” [WATCH NOW]

“Reno, Nevada. 1959. Convertible car radios blast the sounds of Elvis Presley and Patsy Cline. At the nearby casinos, eager players contemplate their fate over the shuffle of cards and roll of dice. Downtown, divorce lawyers confer with out-of-state clients. It is a world considered foreign by thirty-five-year-old Vivian Bell (Helen Shaver), a New York City professor of English literature who, seeking a divorce in Reno, has arrived at the train’s depot. Soon after checking into a dude ranch she meets Cay Rivers (Patricia Carbonneau), a free-spirited young woman who lives at the ranch and works at one of the nearby casinos. Slowly, they come to terms with their feelings for each other. Desert Hearts is a tender and passionate portrait of two very different women as they develop a mutual understanding and friendship, culminating in a liberating experience together.” [WATCH NOW]

“Based on the true story of the film’s writers (and real-life couple), Emily V. Gordon and Kumail Nanjiani, this modern culture clash shows how Pakistan-born Kumail and his American girlfriend, Emily, have to overcome the expectations of his family and their 1,400-year-old traditions. As his parents relentlessly set him up with potential brides for an arranged marriage, Kumail navigates treacherous waters in the worlds of both dating and stand-up comedy. Produced by Judd Apatow and Barry Mendel, The Big Sick features a sterling collection of comedy talent in front of and behind the camera. Having acted in numerous previous Sundance Film Festival selections, Michael Showalter returns this time as a director with a hilariously insightful film that shrewdly puts the spotlight on its writer/star Kumail Nanjiani (HBO’s Silicon Valley).” [WATCH NOW]

“The British have always had a keen ear and perspicacious eye when it comes to portraying and commenting on the nuances of social behavior, and this tail is alternately charming and cutting as it follows Charles, wonderfully played by Hugh Grant, to the weddings of his friends while he steadfastly avoids the altar himself. Charles doesn’t shun the company of women, mind you; no, he has had legions of girlfriends, but he just can’t commit to any of them.” [WATCH NOW]

“Stuck in Palm Springs for her younger sister Tala’s destination wedding, family black sheep and reluctant maid of honor Sarah meets carefree Nyles, the date of a vapid bridesmaid. After Nyles bails Sarah out of giving a wedding toast, she quickly realizes that he is actually not a sentimental fool at all and feels drawn to his offbeat nihilism. After their impromptu tryst is thwarted by a surreal, unexpected interruption, Sarah joins Nyles in embracing the idea that nothing really matters, and they begin wreaking spirited havoc on the wedding celebration.” [WATCH NOW]

“The freshness of Marc Webb’s love-me/love-me-not story is epitomized by its perfectly framed taglines… Boy meets girl—boy falls in love—girl doesn’t. What else can you say about a postmodern love story? Not only is this delightfully surprising dissection of a romance structured so that it catches us continually off guard, but the classic tale of love unrequited is turned as topsy-turvy as a Shakespearian farce. Directed with verve, pace, and confidence by first-time filmmaker Webb and replete with Los Angeles settings that are distinctive and interesting, 500 Days of Summer never descends into ordinary romance.” [WATCH NOW]

“Westerburg High in Sherwood, Ohio is an arena fraught with competitive vengeance, a peer pressure cooker ruled an elite feminine quartet known as ‘The Heathers.’ Veronica Sawyer (Winona Ryder), their newest member, knows that high school isn’t child’s play: it’s war. In a gesture of defiance to the group, she attaches herself to J. D. (Christian Slater), an outwardly mature, philosophical rebel, and a motorcycle-riding newcomer to Westerburg.” [WATCH NOW]

“Director Alice Wu establishes herself as a fresh new American voice with this wonderfully executed romantic comedy of manners. Her debut feature, Saving Face, is a delightful and inspired addition to the roster of films that take on the dynamics of family and love amidst clashing traditional and contemporary mores. … The emotional tones of desire, humiliation, jubilation, and confusion are richly inhabited by a wonderful cast led by the radiant Joan Chen. With Saving Face, Wu and her team have ultimately crafted an infectiously warm, sexy, and heartfelt tale about what it means to live life honestly.” [WATCH NOW]

“Blue Valentine is an intimate, shattering portrait of a disintegrating marriage. On the far side of a once-passionate romance, Cindy (Michelle Williams) and Dean (Ryan Gosling) are married with a young daughter. Hoping to save their marriage, they steal away to a theme hotel. We then encounter them years earlier, when they met and fell in love—full of life and hope. Moving fluidly between these two time periods, Blue Valentine unfolds like a cinematic duet whose refrain asks, where did their love go? Framing the film as a mystery whose answer lies scattered in time (and in character), filmmaker Derek Cianfrance constructs an elegant set of dualities: past and present, youth and adulthood, vitality and entropy.” [WATCH NOW]

“Jon Martello objectifies everything in his life: his apartment, his car, his family, his church, and, of course, women. His buddies even call him Don Jon because of his ability to pull ’10s’ every weekend without fail. Yet even the finest flings don’t compare to the transcendent bliss he achieves alone in front of the computer watching pornography. Dissatisfied, he embarks on a journey to find a more gratifying sex life, but ends up learning larger lessons of life and love through relationships with two very different women.” [WATCH NOW]

“Set against the desolation of the once-vibrant cities of Detroit and Tangier, an underground musician, deeply depressed by the direction the world is going, reunites with his resilient and enigmatic lover. Their love story has already endured at least several centuries, but their debauched, romantic idyll is soon disrupted by the woman’s wild and uncontrollable younger sister. Can these wise, but fragile, outsiders continue to survive as the modern world collapses around them?” [WATCH NOW]

“Boy meets girl, boy loses girl, boy gets girl . . . and they’re blown all to hell. Miracle Mile is a very untraditional romance: love on the eve of the nuclear holocaust. Harry (Anthony Edwards), a shy jazz musician, oversleeps and misses a late-night rendezvous with his new squeeze, Julie (Mare Winningham). At a payphone outside the diner she’s left hours before, he answers a misdirected phone call from a freaked-out missile-silo operator, screaming in full-tilt panic—he thinks he’s reached his father—that the buttons have been pushed, it’s no drill and Los Angeles is fated for destruction. Subsequent events confirm that the call is not a ruse, and Harry begins an all-night quest to find Julie and somehow escape the impending disaster.” [WATCH NOW]

“Donna Stern is a 27-year-old Brooklyn comedian whose unapologetically lewd, warmhearted wit is pretty irresistible with audiences. When she gets heartlessly ‘dumped up with’ by her two-timing boyfriend, Donna plunges into some light stalking and heavy moping. Hitting a serious low point, she performs a dreary set of break-up vengeance and Holocaust jokes and drunkenly falls into bed with a nice young professional named Max—not remotely her type. A few weeks later, condoms be damned, she’s pregnant. Now Donna, incapable of telling anything but the naked truth when she’s on stage, will resort to any means to avoid telling Max the score. As her date with Planned Parenthood draws near, she must confront her doubts and fears like never before.” [WATCH NOW]

“Rick Linklater has already gained an extraordinary reputation as one of the most significant cinematic voices of his generation. Slacker and Dazed and Confused were both original and provocative films, as well as enormously well realized and directed. But neither one is any real preparation for the change in focus, indeed the romantic sensibility, that he displays in his newest opus, Before Sunrise. … Romantic yet provocative, and wonderfully enacted by two performers who are immensely appealing, Before Sunrise is a film which is full of life, love, perceptiveness, and memories. Its images and incidents will certainly resonate for anyone who has ever fallen for another person and talked through the night.” [WATCH NOW]